Time for another installment of the regularly recurring game - "Where the %$@? are the chickens laying their eggs?"
I don't expect many eggs this time of year, of course. But I can tell by looking at them that some of the hens are laying. There are several signs to look for, but the easiest way to tell if a hen is laying or not is to look at her comb. 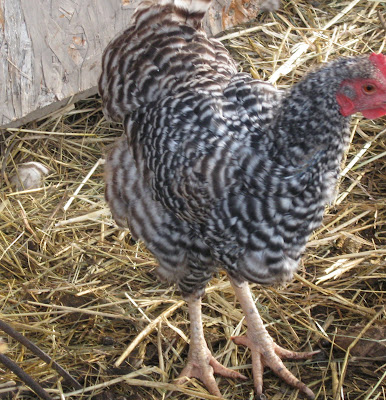 This hen is not laying. She is molting. See how she looks skinny and untidy, and her comb (though I barely got it in the picture) is small and pale? She won't start to lay for probably several weeks. First she has to grow all her feathers back and gain some weight. Hens go into molt after their first year of laying, at about 18 months of age. The first year is the most productive, but the second year is still pretty good. After year number two, it's charity to keep a laying hen alive. 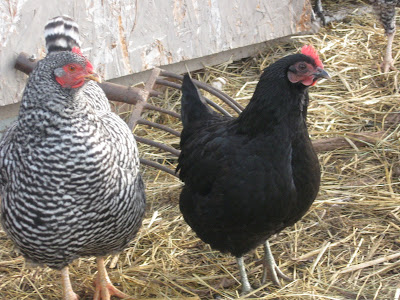 These two hens are intermediate: their feathers are full and sleek, but their combs aren't there yet. The black hen is a little closer to starting production, I think, but the speckled hen is not close yet. 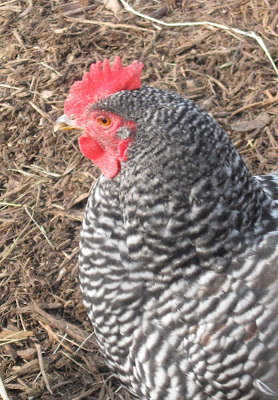 This hen is a layer. She is fat and fluffy, her comb and wattles are well developed and bright red. She is laying her eggs somewhere all right... I just don't know where!!! For comparison, here is the comb on one of our roosters. A hen in good laying form has a nice big crest and wattles, at least two thirds the size of a rooster's. Combs vary a lot by breed, so some will be bigger than others, but all laying hens will have combs and wattles that are thicker, brighter, and redder than hens who are not laying. Now I have to go back out to the barnyard because as I was posting these pictures, I saw that I had taken a picture of an egg which I didn't find when I was out there. Can you find it?

Another way to tell when a chook is about to start laying is, she will develop a big round fluffy backside. The little devils are masters at disguising their nests. We once found a nest with 22 eggs in a place that we inspected daily. ??? Maybe someone here needs a new pair of specs.

How is the knee holding up? I do hope its feeling much better. you still may be able to do the Highland Fling on N/Y's eve. LOL

Highland fling? Oh my that sounds strenuous. Maybe not. But I'm hoping for salsa by my birthday... January 22. We found a nest of 16 eggs in late November - by accident - my husband pulled a bale of hay down out of the hayloft and with it came some 16 eggs... they mostly broke. Oh well... hens will be hens.

I have 11 chicken and yesterday I got 10 eggs. I can get anywhere from 8-10. I have never gotten 11 yet. Someone is holding out on me. By the way the only reason I'm getting that many eggs in the dead of winter is because I have a light on in the hen house with a timer on it, so I don't have to go outside and turn it on and off, and also the only reason I can find all of my eggs is because we fence our chickens in for the winter. Our winters are pretty bad around here so there is no reason to let them free range. I just wanted to add that I'm kind of new to your site and have been reading a lot of your old post. I really enjoy reading about your homesteading ups and downs. I have gone through a lot of them myself. I found it very interesting that you were will to butcher your extra goats for food, because I think if I can't sell one or both of our new bucklings I think I might be doing the same thing. A lot of my family think that I crazy for even thinking about it. Well got to go I wish you the best with finding those eggs

Fascinating, I wouldn't have known... Ahah, I see the egg too. What fun!

Interesting bit on the hens combs & wattles. It's something I didn't know after 3 years of chickens.
New to your blog, I am looking forward to learning & gleaning from your experiences.
We just added a light to our coop & hoping to get more than 1-2 eggs from 13 hens!

I thought so, Maven, but actually it was just a feather.