First of all excuse the weird format, Blogger is giving me headaches and I have neither the time nor the inclination to figure it out right now. This is me, Aimee, in 2014, writing an introduction to the throwback post from 2008, which follows. This time of year six years ago I see I was dealing with escaping goats, and today we are still dealing with escaping goats. Fencing issues never end.
Recently, we came into a bit of cash and I decided the best use of it would be to finally buy as many cattle panels as my heart desired - or as many as the feed store had in stock, which turned out to be 34. I believe that will be enough to address our fencing issues once and for all; or at least the two smaller pastures. The cattle panels have been lying on the trailer with which Homero went and got them, waiting for good weather and my energy level to coincide. That hadn't yet happened when, this afternoon, Homero saw the goats had escaped the sacrifice area by hopping over a droopy area.
Actually fixing the fence to the specifications I desire will have to await another day - right now there is a patchwork of panels covering various droopy spots and in order to fence the whole paddock we will have to remove and re-place all the panels. But today, we did more spot-fixing and the goats are contained. For the moment. 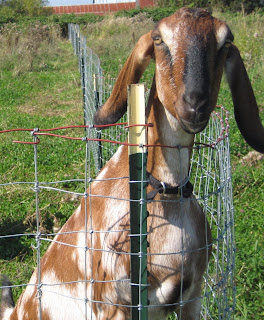 Nobody I know has the troubles I do with containing their livestock. Remember the chickens that almost started a neighborly feud? Remember when Xana kicked out a window of the barn and cut herself to ribbons? The piglet in the bathtub episode?

Well, it's happening again. The goats are escaping. The twins were out yesterday, bleating to get back in, and tonight when I got home, four goats were out. The twins, Xana, and Iris! Iris is not a leaper, which makes me think they must have mashed the fence down somewhere, but it's too dark to see. I'll have to wait until morning.

For now, I'll have to lock them in the big barn (and hope that Xana doesn't just kick out the other window!). I'm terrified of the highway that fronts our property. It's pretty well traveled at all times of night and people speed along at 65. The goats could all get mashed flat, and not only that, they could cause a dangerous accident.

The lady who owns the buck I bred my does to this year is sending her husband tomorrow morning to help me get the fence working. Homero gave his consent for me to seek help elsewhere a couple of weeks ago, after a full day of failed-fence-fixing in the rain. I won't repeat his actual words here, but they were along the lines of "frankly my dear, I don't give a damn."

Posted by Aimee at 4:54 PM 0 comments Links to this post

- The turkeys are processed and ready for pickup. In light of the way they were getting picked off (Predator Problems (Facebook Farmers)), I decided they would be safer in the freezer than in the barnyard. Last year, there was a local guy who processed them for $10 a bird, but he has gone out of business and nobody has replaced him. Luckily, a neighbor of mine belongs to a co-op that rents out the equipment, and she was kind enough to host a processing party. Homero and Rowan went (I was in Seattle with the girls at a gymnastics meet) and the turkeys look great. We haven't weighed them yet but my arm says about 15-18 pounds each. They are all sold already at $4/lb, so that makes back our expenses even without thew two the coyotes ate. A success.

- All animals are in the sacrifice area. A little late in the year, but finally all the hooves are off the big pasture. I was worried about whether or not the ponies would share their shelter with the heifer, but it looks like they have grudgingly decided to do so. The goats - only 4 of them right now - sleep in the calf hutch.

- Breeding season is in full swing. I think my ladies are all pregnant - probably including Ba,bi, the bevy - but I'm not sure. Haboob the buck has been in with them for the last six weeks and I've seen him doing his duty - or trying to. The does don't seem to like him much (probably because he is so small) and he spends a lot of time chasing them and taking flying leaps. But I definitely saw him close the deal with Iris. Last week we sent him off to a neighbor's farm in exchange for a lovely basket of farm produce. Here's hoping her does like him better than mine do.

- The work in the crawlspace  (It Never Rains But it Pours (When is Enough Enough?)) is just about done. Homero, with Rowan's help, did about half the actual work, saving us lots of money. However, in the course of events, about half the ductwork got removed and needed to be replaced and we had spent literally our last dollar paying the workmen. We had to wait for payday to buy new ducts, not to mention propane, and in the meantime the weather took a turn for the seriously cold. For about 10 days we had to huddle in one room at night with the space heater. But all's well that ends well - now I can be relatively certain that my house isn't going to sink into the ground or go sliding down the hill anytime soon.

More later - getting dinner on the table.

Posted by Aimee at 4:54 PM 0 comments Links to this post


We've been dealing with a lot of house issues lately (another post on the crawlspace will be forthcoming soon) and as I look back to 2010, I see that we were dealing with house issues then, too. Really, when have we not been? In 2010 it was the roof. When we bought the house in 2007, we had hired a local company, Joosten's roofing, to do a complete re-roofing, as the farmhouse had a truly ancient shake roof on it that ought to have been replaced years before.

In 2010, when the roof began to leak in various places, we called the company back and asked them to address the issues... that didn't go well. Our attempts to communicate with Mr. Joosten devolved into screaming and racial slurs. You can read the story below. Unfortunately, this story did not have a good outcome. We never did get Joosten's Roofing to address their crappy workmanship  and we never did get satisfaction in the form of a lawsuit or anything else. The best I could do at the time was a scathing report to Angie's List, which brought their overall rating down a full letter grade. Take that, you bigoted bully!

The details: when the roofers removed the old shake roof, there was a lot of rot underneath - the plywood and even many of the rafters on one side of the house had rotted. But instead of talking to us about this, they simply laid new plywood down and covered up the whole mess. Obviously, this didn't last. There were more problems - flashing that was improperly installed and which allowed water into the attic around the vents and ruined our attic insulation.... gutters which were taken down and not reinstalled... really you name it. Below read my letter (though nothing came of it, it's still a good letter) and please don't ever do business with this awful man!

For anyone who lives in Skagit or Whatcom counties: Please do not hire Joostens roofing. Not only did they do a shoddy unprofessional job, but when my husband asked them to come back out and inspect the damage, they told him "take me to court" and hung up on us.

Given that response, I wrote a letter to the better business bureau, and I forwarded a copy to Joostens roofing. Their response to that was to call my husband on his cell phone, start yelling racial slurs at him, tell him to "go back to Mexico" and threaten to "sic immigration" on him.

Yeah, I know! We were both just totally aghast. I have never personally witnessed such vicious, blatant racism. Oh, I know that much worse happens every day, to all kinds of people - I just hadn't actually heard anyone SAY such things out loud. When I myself spoke to Mr. Joosten, he started talking about how I must be a liberal and he was a conservative and that was "the difference." I reminded him that racial discrimination is illegal for conservatives as well.

I was so angry at that point that I couldn't keep speaking to him. I wrote this letter instead:

Posted by Aimee at 1:49 PM 0 comments Links to this post