Baby It's Cold Outside (and Inside)!

We are in the middle of one of the most prolonged cold snaps I can remember. This is the third or fourth day that the mercury hasn't risen above freezing, and it is not predicted to do so for nearly another week. In fact, daytime highs have been well below freezing - today I think it was 27. Nighttime lows are in the mid teens, and last night's windstorm brought the windchill down into negative numbers.

Years ago, when I thought the farm needed a name (why?) I chose "Windy Hill Homestead," which is very apt. There is always a stiff breeze up here, and when there is a storm, we get the brunt of it coming over the ridge from the water. Yesterday afternoon, as I went out to feed the animals in the fading sunlight at 4:00 pm, it was so icy that my hands were hurting within seconds, and whenever I turned my head crosswise to the wind, it felt as though tiny little icepicks were stabbing into my eardrums.

Trying to keep some water liquid for the animals is nearly impossible. When we put in the new water line last year (Bad News from Home), I decided to pay extra to extend it all the way out to the fence line, an extra fifty feet or so. That cost us an amount which I can't remember right now but which was far from insignificant. My husband was not keen on spending the extra money, but I was thinking of days like yesterday, days when I would be carrying the water to the animals in two five gallon buckets through an icy tornado, when the wind would blow the water right out of the buckets and into the tops of my rubber boots. Yesterday, I congratulated myself grimly on my foresight as I filled and refilled the bucket and simply lifted it over the fence. The wind blew it right out of the bucket and into my face, yes, but still I think it was an improvement.

No matter how much water I pour, however, it is kind of a moot point, because ten minutes later it is frozen again. The dairy cow in particular is always thirsty. I worry a lot about that poor little thing; she is terribly skinny, or at least she seems so to me. I've never had a cow before and I'm not really familiar with their anatomy. I know they are bonier than horses or goats, but this one's hipbones and ribs are sharp. I don't know why - she has alfalfa to eat all day long and gets supplemental grain twice a day, plus things like old carrots, beets, and apple cores. I gave her a double ration of grain and piled up more straw in her shelter. This morning she was up and bawling for her morning grain, so I guess she's going to be fine. I just feel terrible for her, all alone. The goats and ponies all crowd into the main barn together and they are toasty warm. I know because the water I carry inside the barn doesn't freeze. It gets knocked over and pooped in, but it doesn't freeze.

It's plenty cold inside the house, too. We have done a fair amount of weatherizing over the years, but the fact is, this drafty old farmhouse is never going to be very warm in winter. Homero's skills at installing weatherstripping leave something to be desired, so we hang a quilt over the door at night and lay a rolled up towel against the crack on the floor. A few years ago we insulated the crawl space, but most of the insulation was ruined in the flood (see above link) and we haven't had the time/money/inclination to re-insulate yet. Then there is the fact that this house faces a spectacular view to the north and takes advantage of it with lots of big, north facing windows. Only some of them are double paned.

Somebody somewhere told me about a cheap way to insulate windows, with bubble wrap. Having googled it, it seems to be legit. Today I went by a mailing shop and asked if I could buy a big roll of bubble wrap. They said no, but told me where I could do so, on monday when it opened. So, that's the plan for next week: cover my big, beautiful view with bubbles. Then see if I can come up with a threat dire enough to keep the kids from popping all the bubbles.

Bubble wrap is only a band-aid - over the long haul we need to make some serious changes in how we heat the house. I bought a thousand dollars worth of propane this week and I don't expect it will last the winter. That's on top of the $500 I spent on propane back in September. Years ago, Homero bought a brand new oil burning furnace off Craigslist for a couple hundred bucks, with the idea that he was going to convert it to run on waste veggie oil. That would be cool, if it ever happens. The brand new oil burning furnace is right where he put it five years ago, when he unloaded it off of his truck.

I would love to install a wood burning insert in our great big fireplace, which, incidentally, is another major source of lost heat. It's basically just a hole in the house, and we keep the flue closed and - you guessed it - hang a quilt over the hole in the winter. I looked into the cost of putting in a wood burning insert, and was staggered. Totally aside from the cost of the insert itself, we would have to have the whole chimney clad in sheet metal and get a bunch of masonry work done. Suffice it to say, it's several winters worth of propane at currant prices.

In the meantime, I buy up all the wool sweaters I can find at Goodwill and constantly keep a teapot on the simmer for hot tea and cocoa. This week, the furnace has been running full blast night and day but the temperature inside won't go above 63. We are all dried out like beef jerky, sipping our tea and huddled on the couch under blankets in our sweaters watching movies.

Posted by Aimee at 8:35 PM 2 comments Links to this post

With the weather taking a sharp turn towards the shitty, and without a car capable of transporting all of us at once, we have recently found ourselves stuck in the house with a lot of time on our hands, and cabin fever was starting to set in.

I try to limit the amount of time the kids spend on their various electronic devices (subject for another post), and whenever they aren't absorbed in some beeping game or watching a show about shoes or something equally inane, they expect me to entertain them. I've mentioned that this is what books were invented for - long winter afternoons - but I get a lot of whining coming back at me. SO.... saturday I unilaterally declared Potato Day, 2013.

Potato Day is a venerable holiday in our house, going back to 1997 or thereabouts. I invented it one day when Rowan was a three year old bored with all her toys and not yet old enough to either shove outside or sit in the corner with a book. On potato day, we do all things potato-related we can think of.... 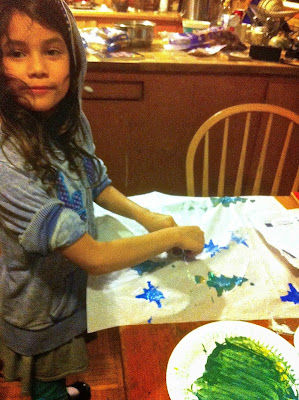 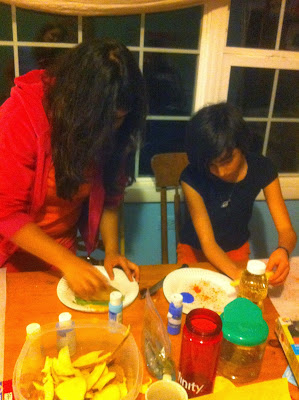 Potato stamps, for example. I drag out the cookie cutters and we make Christmas wrapping paper with potatoes and paint. And glitter, of course, can't forget the glitter. While the kids are stamping, I make them potato snacks..... 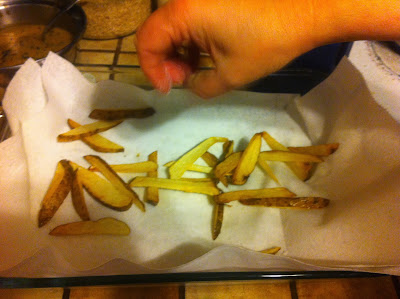 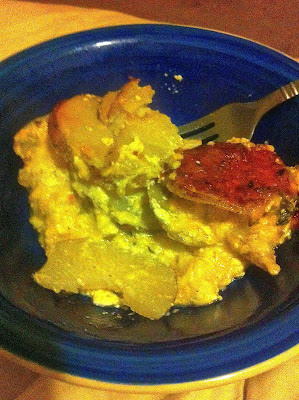 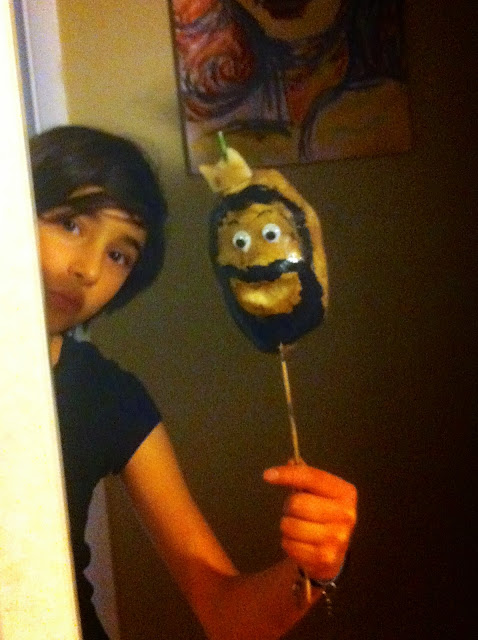 ..and my favorite craft of the year: potato puppets. This is one of the three kings. Balthazar, maybe?
Potato Day only comes once a year, so I'll have to think of something else for next week.... it's supposed to stay cold and wet for the foreseeable future.

What do you all do on those interminable winter evenings?

Posted by Aimee at 11:39 AM 0 comments Links to this post