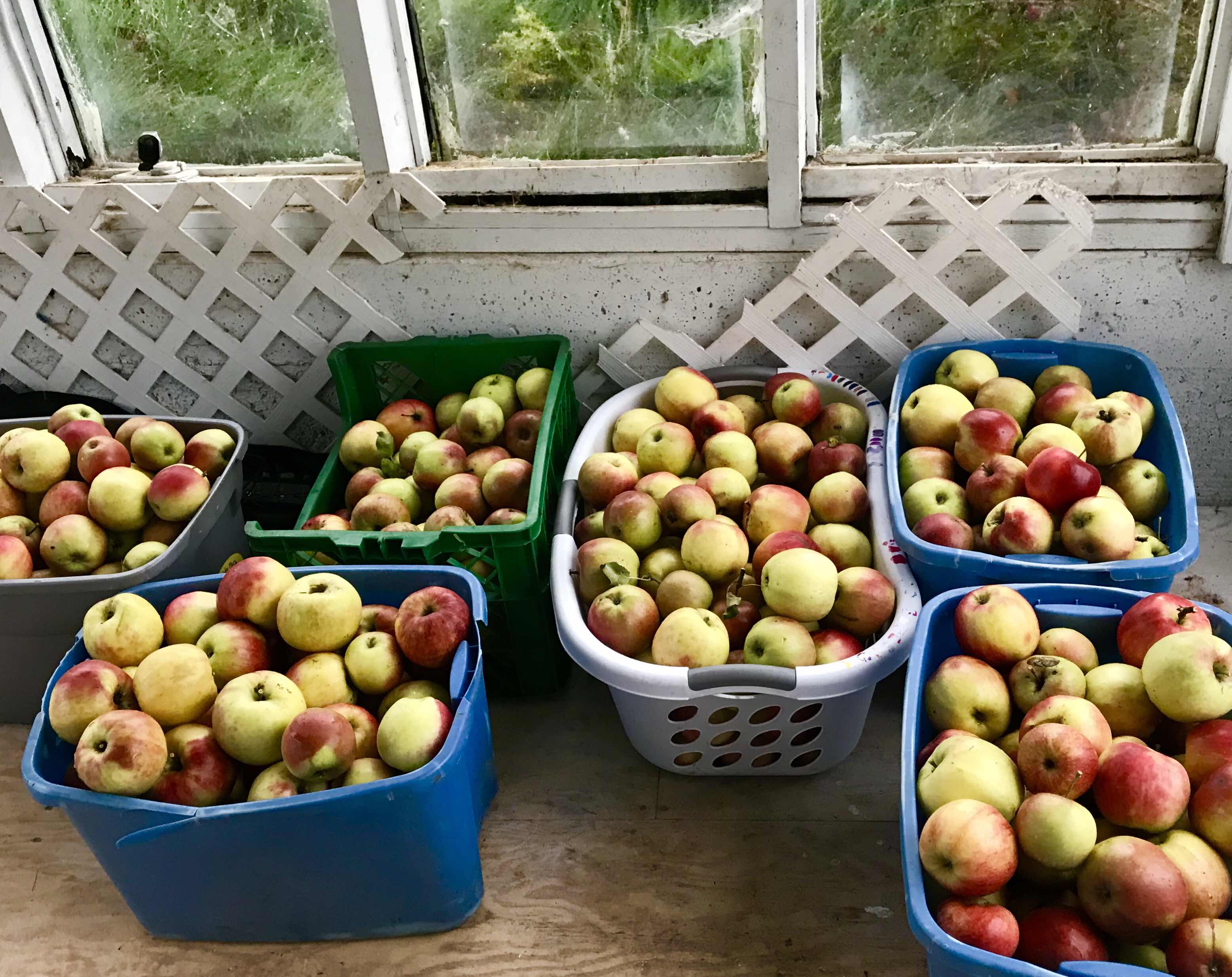 It’s apple season again, which means I’m too busy to write about it. These lovely specimens were part of a farm glean courtesy of the Gleaner’s Pantry. I’m hoping the weather holds and we can haul out the press this weekend, but in the meantime I’m dehydrating, making sauce and pies.
Enjoy fall!!

Posted by Aimee at 6:01 PM 0 comments Links to this post

Italian plum trees are known for having an alternating harvest: one very heavy year alternating with a very light year. As everyone who has an Italian plum tree knows, the heavy harvests are very heavy indeed. In 2016, the last heavy harvest year, there were so many plums on the tree that branches were breaking from the weight of all the green plums, and we had to strip off and throw away hundreds and hundreds of unripe plums. 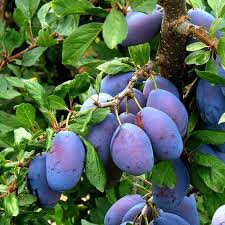 Last year, true to form, the tree produced very few plums. I am actually glad that the Italian plum tree provides its owners with a rest every other year, because dealing with literally thousands of plums all ripening at once is a ton of work.

Of course, we cannot possibly make use of each and every plum. That's just a silly proposition. Even if we were to dedicate ourselves to preserving plums 24/7 in season, inevitably many, many plums would fall to the ground and become a feast for wasps before we could make use of them. And that's just fine. After all, wasps need to eat too.

My sense of duty, however, and overdeveloped guilt reflex, mandate that I make a valiant attempt every year to utilize as many plums as possible. There are lots of ways to use plums: eating fresh (we eat a lot); dehydrating - the dehydrator is going day and night in mid-september; cooking in pies and crumbles; giving away to friends and neighbors; and wine. For using up a whole lot of ripe plums at once, there is no preserving method superior to winemaking.

In 2016 I made my first attempt at plum wine, and it was fairly successful. By which I mean I produced a quaffable product that would reliably get you drunk, not that I produced a product worthy of bottling and bragging about. Surprisingly, the wine was a light, orangey rosé, not the sort of deep, velvety purple you would expect from blue plums. It was pleasant, quite dry, with a bit of a sour tang. It was good enough that when faced with a similarly overwhelming number of plums this year, I decided to repeat the experiment.

One of my many failings is that I am constitutionally incapable of taking notes, keeping records, and thus reliably repeating successes in the kitchen. I can't remember - and didn't write down - what type of yeast I bought in 2016, nor whether or not I used yeast nutrient (which is something you usually have to add to wines that aren't made from grapes), nor how long I left the wine in the primary fermenting chamber (AKA food-grade plastic bucket) before putting it into a carboy and air locking it.

So, basically I was starting from scratch. I followed a recipe from one of my books, more or less - I decided I would forgo the reccommended yeast nutrient because I was making the wine on a weekend and didn't want to wait until the home-brew store opened on Monday. And I made a few other tweaks - I added honey instead of sugar, I didn't have any Camden tablets - okay, I basically ignored the recipe entirely and winged it 100%. Fruit + sugar + water + yeast + time = alcohol. Right?

I do - always - sterilize equipment with boiling water. That's a non-negotiable. And I used a real wine yeast (Chablis, if I remember right), not baker's yeast. But I think this year's batch may have suffered somewhat from my lackadaisical attitude. After putting the wine into a carboy and air locking it, it bubbled vigorously for a few days, but then stopped entirely, rather than just slowing down as it should do. I left it in a cool place to keep doing its thing for two more weeks, but then I sat down and stared at the airlock for three minutes. No bubble. That is pretty definitive that the fermentation has stalled.

Stalled fermentation isn't the end of the world - not even the end of the wine. There are things you can do to try to get it going again. I decided to rack the wine off into another carboy, thereby aerating it. Tasting the wine as I transferred it, it was pretty thin and sour tasting, so I decided to add a bit more sugar. I replaced the airlock, and now there's nothing to do but wait three or four months and then taste it. It will either be drinkable or not, and either way it's experience. The tremendous abundance of plums makes it cheap and low risk to experiment with winemaking, just as the tremendous abundance of milk in early summer makes it cheap and low risk to experiment with cheesemaking. If, next spring, I have a few gallons of nice plum wine, I'll be happy. If I have to pour a few gallons of weird plum vinegar out onto the compost, well, so be it.

There is another, much lower risk, delicious way to ferment a few dozen plums, though, and I did that too this year. A plum shrub. A shrub is basically a sort of fruit concentrate - you put chopped ripe fruit to macerate in sugar for a few days, and then pour over apple cider vinegar to cover. The shrub will keep in the fridge indefinitely, and can be mixed with water - still or sparkling - to make an elegant and yummy non-alcoholic drink. Of course, you can also add a jigger of rum or vodka or gin to your cocktail. I made a half gallon of plum shrub flavored with rosemary, and it was delicious, with or without spirits.

Looking forward to a year off. 2020 will be soon enough to get elbow deep in plums.


Posted by Aimee at 8:43 PM 0 comments Links to this post