There are all sorts of things I'd like to write about, but I am stymied by my inability to learn the new operating system my husband downloaded last week. Whatever it's called - the Apple of Doom would be my nomination - it crashed our computer repeatedly and forced Homero to spend many hours on the phone to tech support.

Now the basic functions of the computer seem to be up and running - we can, for example, google stuff and use the word processor. The computer is communicating with the printer again which means I can actually go to work. But there are still many areas in which it seems the new operating system is basically incompatible, and one of these is Blogger.

Yes, I am in fact writing a post. I haven't hit "publish" yet so we will see if it works at all. But I can't see what I'm typing (I only know I've made a mistake when autocorrect pops up with a suggestion) and I can't upload photos anymore, because in the new operating system, iPhoto has switched to something just called "photos" and apparently Blogger can't communicate with "Photos."

Which is really a shame because I want to show you all photos of our adorable new dog. When Ivory passed away last spring after 14 wonderful years with us, we were too sad to even think about a new dog. But after some six months, we found ourselves pining for canine companionship. We began searching online for nearby adoptable dogs, but none of them struck our fancy until we saw one who looked so much like Ivory that we collectively gasped. 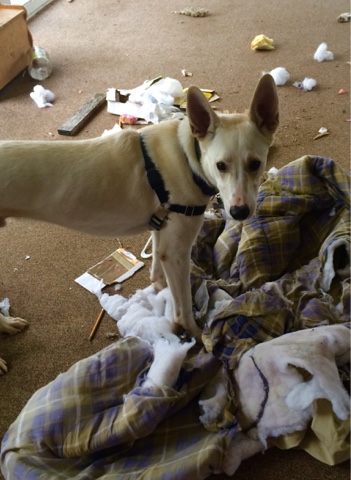 We convinced the shelter to let us have him (more on that another time - it wasn't an easy process) and he's been with us for almost two weeks now. During which he has pretty much torn the entire house into bite sized pieces.
We named him Haku, after the white dragon in Spirited Away. He is ten or eleven months old, seriously hyperactive, and completely innocent of manners. He needs immediate professional training. I have only ever had one dog -Ivory- and she never did become a well trained dog, although luckily after her puppy stage she had a wonderful temperament. 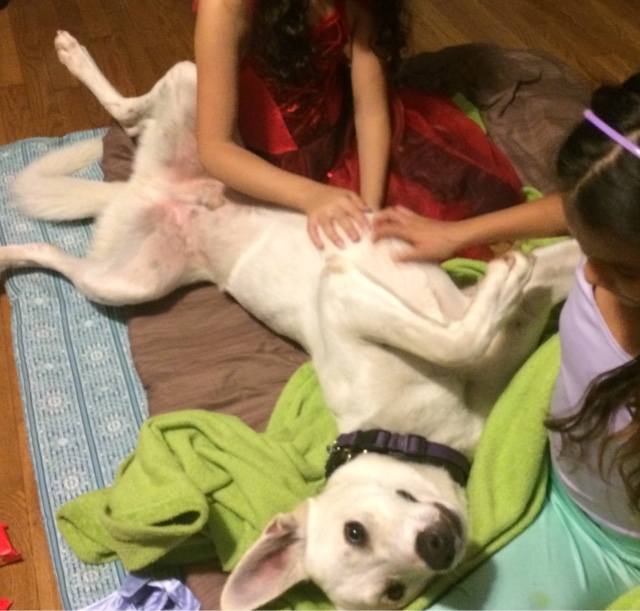 Haku is going to be a challenging dog for a while. But I feel up to the challenge. I know what the long term payoff is - a wonderful companion and friend for years and years to come. No dog can ever replace Ivory in our hearts, but we can learn to love a new dog as well as we did her.
And God willing, he won't eat the cat.

Posted by Aimee at 1:07 PM 0 comments Links to this post

Life as a Microbe (The End of the Food-Chain)

It is a maxim of ecology that "wherever there is something to eat, there will be something to eat it." At least I think it is: I may be remembering this line from the excellent novel Dune, uttered by the Imperial Planetologist Dr. Kynes as he lays dying in the deep desert, eyeing the hawks circling above him.  In either case, the principle is sound. Anywhere on Earth, when anything dies and falls to the ground, it will get eaten, if only by microbes.

Just as there a chain of organisms on the production side of the food pyramid, beginning with clorophyll containing plants that convert sunlight into sugar and ending with peak predators like lions and humans, so there is a chain of scavengers that reduces the remains of all that dies back into its constituent molecules. Descending from the apex on what we might call the downslope of the food chain, we have large animals like hyenas and vultures, followed by smaller creatures that live on decaying flesh like crabs and ants, and ultimately the myriad microbes that slowly transform the less digestible bits such as bones and hair back into soil. The chemistry of systemic catabolism is just as fascinating as that of the more highly visible and valued systemic metabolism.


I feel that I have firmly joined Team Scavenger. I devote a great deal of time to seeking out resources unnoticed or undervalued by others. In fact, my family largely subsides on my local waste stream. That we live so well and so fatly is a measure of just how rich and bountiful that waste stream is.

In this past week alone I have made 5 gallons of apple cider entirely from apples that other people were throwing away. About half the apples came from a neighbor who didn't want them and the other half from the Gleaner's Pantry. If you've ever pressed cider you know how many apples go into 5 gallons of cider and it's a buttload (not really - a buttload is 126 gallons). The apples that I collected from Gleaner's - in one day!- represented a very small percentage of the apples discarded on a daily basis in my small town.

That same day, I also collected 6 or 7 boxes of surplus bread. Most of it was quite fresh and I saved a little for us to eat ourselves - the rest of it went out to the mama barn and fed my pig, turkeys and chickens for a solid week. Again, this represented only a tiny fraction of what was there for the taking. I would have taken more but I literally didn't have any more room in my car.

In addition, I also gleaned enough fresh fruits and vegetables - tomatoes, chiles, onions, a couple of pumpkins, cucumbers, oranges and grapes - to feed my family for a week. I canned 8 pints of salsa, and if I weren't so lazy I could easily can 8 more right now, simply from that one glean.

Today, my good neighbors N. and R. from church called me and asked if I wanted corn stalks. They were cleaning up the garden for the year and thought I might be able to use them for my animals. I said "sure!" and went over to help them collect and stack the stalks in their trailer. I also brought over a loaf of pumpkin bread (made from the pumpkin I got from Gleaners) and some cheese and a quart of apple cider (also a product of Gleaner's).

The corn stalks had many cobs still on them, those that had been damaged by crows and weren't fit for human consumption. They sure were fit for pig and goat consumption! My critters went crazy for the corn.

In the chain of scavengers, I imagine myself and my family as first-level scavengers. We are the hyenas and the ravens. We take the whole, recently discarded (read: recently deceased) product of society and make what use of it we can. This includes not only the food I get from Gleaner's, but also the clothing and furniture that I buy secondhand from Goodwill or the Salvation Army thrift store. We are warm and well-dressed in the castoffs of others.

Any food that we can't use - peels, skins, bones, and the like - or that we end up not eating because there is just too much of it - the lettuce that wilts in the back of my fridge before I can eat it; limp carrots and cucumbers; bread that has gone a little green - we give to our pig and our chickens. They are the second level scavengers, akin to lobsters or beetles.

And when all that refuse has been processed by my animal's digestive systems, we collect it once again and compost it. Enter the microbes. Our compost pile is rich, black, velvety and fragrant. Once a year, in springtime, our next door neighbor comes over in his tractor and collects some of it for his garden beds. Come next summer, some of it will make its way back to us in the form of sweet cilantro, ruby beets, plump squashes.

This time of year, as the world turns towards darkness and winter, I am especially conscious of and especially grateful for the quiet science of recycling that takes place in the sleeping earth. The dark side of the year is the time to contemplate the renewal that happens as we rest, as the dirt rests. So much grace happens in repose, so many vital processes are accomplished only in stillness. We are all of us, at least in this culture, so biased towards the light - toward action, towards growth and vigor, toward Yang, that we are blind to the necessity of decay. The alchemy of decay; of rot, of mold, of the mushroom and the slug. By such humble beings are we sustained, generation after generation.

Hail Yin, hail Kali and Hecate, hail Persephone, Isis, Osiris, Jesus, and all those good Gods and Goddesses who descend into the earth to rise again after three days, or seven, or nine. Hail the seed that goeth into the ground and dies, that it may live.


Posted by Aimee at 8:50 PM 4 comments Links to this post