Forgive me that I haven't written a new blog post in a couple of weeks. I've been too busy reeling around in horror and exploring the limits of my capacity for shock.

The election results left me profoundly flabbergasted. I have to admit what now seems to me to be an extreme naïveté: never during the campaign season, not once, did I ever seriously contemplate the possibility that the citizens of this great country would elect a man so ignorant, so self-serving, so incompetent, and so boorish - not to mention bigoted, misogynistic, and disrespectful of the basic tenets of democracy.
After spending a couple of days blubbering incoherently, I went into action mode. In the last ten days, I have organized an event for local folk who want to take concrete action to fight back against the alarming rise of hate speech and intimidation. I'm calling it the "Peaceful Progressive's Potluck," and I'm
hosting it at my house after thanksgiving. I'm promoting it through a new Facebook group a friend created called "whatcom rising."
Here's what I'm hoping for: firstly, that a whole bunch of good hearted people who haven't met before can come together over good food and a few drinks and have a good time. It is so important not to give in to despair and pessimism. In times like these, just having fun can be a subversive act.
Secondly, I hope that everyone who comes will bring an idea. I'm thinking of this event as a brainstorming session - please share your personal passions. Are you passionate about farmworker rights? Do you burn with zeal when it comes to protecting women's access to reproductive health care? What are you already involved in? So many of us are asking ourselves "what could I be doing right now?" Tell us about the great organizations and local opportunities that already exist. Let's make a list. Let's organize carpools to faraway events, let's have phone-your-representative brunches.
But most importantly, I want to marshall the power of friendship. I'm thinking about studies that show how effective it is, in maintaining a fitness regimen (for example) to have friends who hold you accountable. I want to create a community of friends who hold each other accountable. I want us to pledge (maybe formally, in some sort of small ceremony) to keep encouraging each other, chivvying each other, even pressuring each other to keep fighting the good fight.
I did something very scary this past Sunday. It shouldn't have been scary, but it was. I stood up in church and made a little speech about what I think it means to "love our neighbor as ourselves." I said I don't know what that phrase means, if it doesn't mean to shelter my neighbor, to protect him from those who revile him, to defend his children as though they were my own children. That doesn't seem like a controversial statement, but my congregation has enough Trump supporters who could decode the message that it felt risky to me. My voice trembled as I spoke.
I envision a community of neighbors who will uphold each other and cheer each other on as they take on the kind of small but real risks that speaking out entails. Standing UP means standing OUT, and that's scary. So much scarier if we feel we are standing alone. So much easier if we know there is a community of friends who has got our back.
Wherever you live, whatever your politics are - I'm talking to you rock-ribbed republicans here - please stand up and clearly state that you will not tolerate hate and discrimination. ESPECIALLY you republicans. Combat the general impression that being a conservative means you want to deprive women, immigrants, and people of color of their civil rights and their guarantee of due process and equality under the law. Make
it be known that espousing conservative values does not mean you want to cause suffering among vulnerable populations.
Or does it? Convince me. Please.

Posted by Aimee at 9:21 PM 2 comments Links to this post 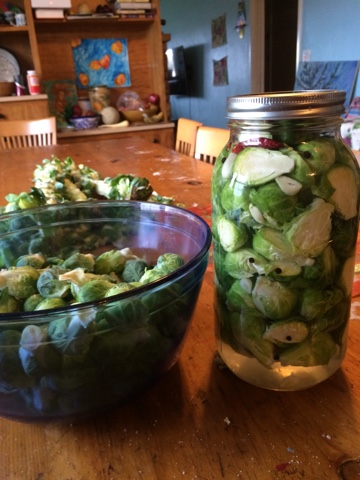 What do you do with too many Brussels Sprouts (courtesy of the gleaner's pantry)? I'm gonna try Sprout Kraut.

Posted by Aimee at 7:26 PM 2 comments Links to this post 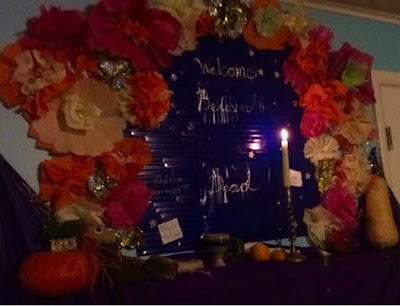 This year's altar for the Day of the Dead. It's been an especially busy few weeks and I'm afraid I did not have time to make the kind of elaborate altar I would have liked to. Especially I feel bad about not looking through the photo box for pictures of all our dead. Instead I simply wrote (in silver glitter glue) "Welcome, Beloved Dead." I hope our ancestors and friends will be satisfied with a simple recitation of thier names as we enjoy our chocolate and sweetbread.

I did make sweetbread - it's in the oven right now. And I have the traditional essentials on the altar - flowers, liquor, salt, snacks, a candle to light the way and a doll for the spirits of the "deceased innocents," or children.

Of course, it doesn't matter what's on the altar, not really. It doesn't matter that we celebrate according to any particular ritual or any tradition. As I once said at the end of a class that I led on making altars: "wherever you lay your altar, you lay it on your heart." Or, as Black Elk said, "The sacred Mountain is everywhere."

It doesn't even matter that we name our dead, or that we know their names. What matters, and what all the trappings are designed to help us do, is to give thanks. What matters is that we recognize and honor the effort of all the generations before us. We are only here because of their tenacity and sacrifice. We are only alive today because of their dedication and success as parents.

When they were alive, they suffered and sweated and worried. When they were alive, they worked to feed us  - their children - and teach us. They handed down their skills and their wisdom, hoping and praying that it would be enough to sustain us. They healed our hurts and they defended us with thier blood. They tended us when we were sick and they laid out our brothers and sisters with tenderness and grief when they died. They did their damndest.

So we light candles and we invite them to come on home for a little while and listen to us express our gratitude. We show them - look, we are alive. We are well, we are fed. We are safe. It was all worth it - here we are.

Why does it matter to do this? After all, let's be honest, they're dead. They probably can't hear us. They probably don't care. Why should we pretend that they can and they do?

Posted by Aimee at 6:40 PM 0 comments Links to this post