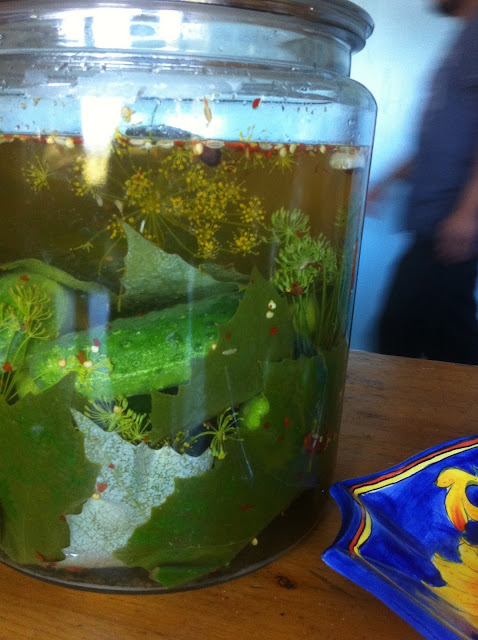 High Summer is upon us. Although I have yet to change the altar - it's still dressed with the kids' report cards and end-of-school paraphernalia - the preserving season has begun, and cannot be ignored.

This year, I've decided to try and keep an accurate record of all the preserving I do. So far, I had only posted one entry, and that consisted of:


Today I can add:

This is not counting cheese, since I still haven't figured out how to "preserve" cheese for longer than a few weeks. We either eat it fresh, or it molds.

Pickles make me happy. I love real lacto-fermentation, and I love real kosher dills. Last year, I made a ridiculous quantity of pickles; far more than we could eat, but luckily I found a neighbor who owns a dairy and cheesemaking operation who traded me pickles for cheese. Cheese that can, unlike my own, be stored and aged. Hopefully she is still interested in pickles this year, because three gallons of pickles is a lot.


Posted by Aimee at 8:34 PM 0 comments Links to this post

The End of an Equine Era

It's been a hard week on the farm for animals. Aside from Haku's accident on the highway (not fatal, thank God), we have had to put down two other animals. My daughter's pet ferret, Commodore, who was seven years old and full of tumors, and Rosie Pony. 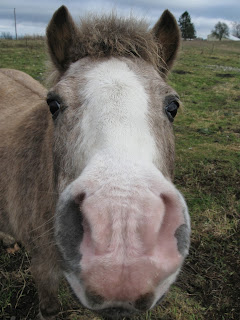 Rosie Pony was a shetland pony that I rescued nine years ago. On a whim, I stopped in at a neighbor's farm who had a sign outside saying "horse sale TODAY." She is a breeder of fancy Arabians, and I wanted to see some pretty fancy Arabians, just for fun, so I stopped. And there were plenty of beautiful, fancy Arabians. And in amongst them, this dumpy little grey pony, wth twin yearling foals at her side. When I asked about her, I was told that she was "from a big free-running herd in eastern washington" and that they didn't have much information about her, but that she was going to the auction (read: dog food factory) if nobody wanted her today.

So, I took her home for fifty bucks. Nobody told me, because I assume nobody knew, that she was pregnant. Months later she gave birth to a lovely chestnut filly, who we named Poppy. 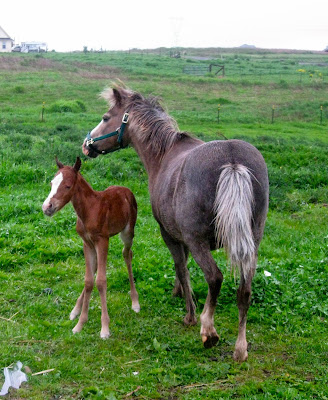 Whatever sort of equine Rosie had been crossed with, it wasn't a shetland pony. Poppy quickly grew to be larger than her dam. And kept growing. Eventually, she grew into a sturdy 12 1/2 hands. Rosie was an excellent mama. For years I tried to interest my children in riding. They showed a few fits and starts of interest, but neither of them showed the kind of sustained interest that would justify putting large amounts of money into professional training for Poppy. So eventually, a couple of years ago, I decided to give her away to a family who would invest the time and money into her her that we couldn't. It was very sad, but I don't doubt it was the right decision. The family I chose, after much deliberation, has three little girls of just the right ages to grow up with a pony, and a next door neighbor and family friend who is a horse trainer. They promised to let me visit Poppy sometimes. 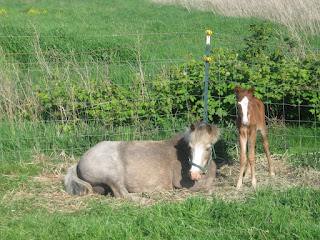 After Poppy left the farm, Rosie went downhill. She still had companions in the form of goats and the heifer cow, but she never really bonded with any of them. In fact, the cow started to bully her by leaping on her as though she were breeding. Poor Rosie staggered under the cow's weight. She had a chronic eye condition, which was mild when I got her but which got worse and worse with every passing winter until she was constantly plagued by inflammation and pain. The vet said he didn't know what it was but thought it was incurable, and gave me steroid creams and antibacterial medicines. They helped a little, but overall, her eyes kept getting worse.

Then, this past spring, she foundered on the new grass. She was clearly in some pain, walking stiffly and bobbling her head. And then in the past few weeks, she began to move around very little, and to stay lying down even on bright warm mornings. One day I went out to the barn for morning chores and found her lying on her side in the muck, and she wouldn't get up.

I don't know how old Rosie is. The vet thought she was probably about sixteen or eighteen when I brought her home, which would mean she would be twenty-five to twenty-seven this year. Not crazy old for a shetland pony, but well into retirement age. Considering the pain she was in, and after consulting with my farrier, who has cared for her the entire time we have had her, I decided to ask the vet to put her down.

It was the right decision, but it makes me sad nonetheless. Not just for Rosie herself, but because I know I will never have a horse again - unless, perhaps, some yet unborn grandchild convinces her mom to get her a pony by saying "they can live on grandma's farm," in which case, I will totally take that child's part and completely override the reasonable objections of her mother.

Our ponies were entirely impractical, but they were beautiful and affectionate and I loved them. Having a baby pony born on the farm fulfilled a childhood dream of mine, and was absolutely as lovely and unique an experience as I dreamed it would be. My girls will always have the memory of having a pony as a friend and a pet. I enjoyed them the entire time they were here, and I don't regret a single dollar spent on farriers, vets, alfalfa, or fencing!

Posted by Aimee at 5:33 PM 0 comments Links to this post