I am taking a hiatus from New to Farm Life. I find myself thinking, and writing, more and more about our upcoming sojourn in Oaxaca, about our preparations, about my fears and anxieties, and my hopes and dreams. I'd love for you all to follow along as I journey into this new, exciting, and somewhat terrifying phase of my life. If you would like to, please come visit the new blog, New to Mexican Life.
The first things I post will be writings on the topic of our upcoming trip, past trips, and my thoughts about Mexico in general. All have been published here before, but you may not have seen them. I'm doing that as background for the benefit of new readers.
I hope some of you will come along for the ride. If so, I welcome you. If not, adios for now, and I'm grateful to have had you all as readers.
Aimee

Posted by Aimee at 4:16 PM 17 comments Links to this post 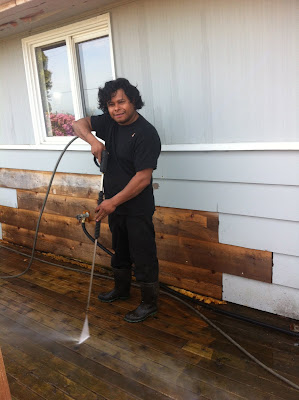 In addition to painting and re-carpeting the three bedrooms (Things That Need to Happen (Before We Can Go), which we have already done, I identified three large projects that need to happen before we can show the house to potential renters. The first of these is the deck.
Homero borrowed a friend's pressure washer yesterday and spent all day pressure washing the deck. I do mean ALL DAY. Our deck is gigantic; it wraps around three sides of the house and has railings all the way around, as well as built in benches for sitting and admiring the lovely view. It is wide and ample, with plenty of space for grilling or having a nice outdoor party. We don't do those things, however. We use the deck to store recycling bins and a few bicycles and scooters. We leave muddy boots on it. Other than that, we ignore the deck, letting trees and shrubs grow up around it and letting it get slimy and slick. Without straining my memory, I can think of at least four nasty falls people have taken because of the slimy mold on the deck, one of which resulted in three weeks in a leg brace (that was me).
Considering that the deck would, if it were in decent shape, actually be a really nice selling point, I chose the deck as priority numero uno. As we've had a few days of nice weather, coinciding with a slow patch in the shop, Homero decided to talk it yesterday. It didn't rain last night, and today has been sunny and fair, and so the deck is dry today. It looks great! No more slime! No more moss, no more dried on chickenshit! Now we need to buy a five gallon bucket of deck stain.
While he had the pressure washer, I asked Homero to please also wash the RV (which, sitting out in the yard for four years has aquired a thick coating of greenish-brownish slime) and to clean out a few of the empty 275 gallon totes so we can use them for water storage.
Next up: the playroom! As you can see, it needs some serious help. 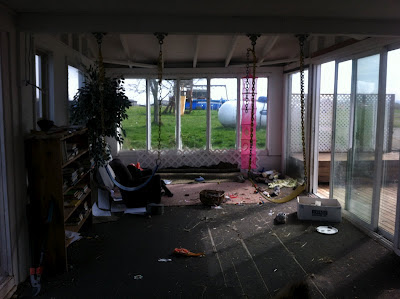 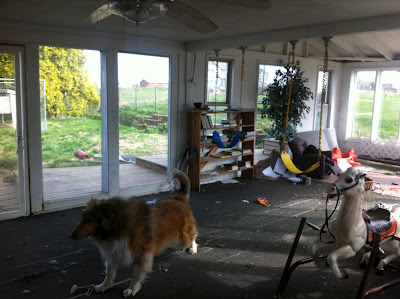 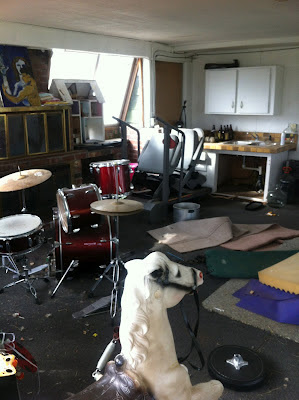 Posted by Aimee at 3:21 PM 1 comments Links to this post

Why is it that every time I get some good egg trades going, the hens mysteriously quit laying? Since my last post on Monday (Trade Network 2012 (Craigslist Chronicles)) I have collected a grand total of thirteen eggs. In the two days before that, I collected twenty-eight.

Maybe the hens put their pointy little heads together and decided to hold out on me for a bigger piece of the action. They all want massages, too. Maybe my chickens are organizing (did you ever see Chicken Run? I love that movie).
Maybe they are just laying their eggs in the blackberry bushes now that it's warmer out. Time to lock them up in the coop for a few days until they get the hang of things again.

Posted by Aimee at 4:12 PM 6 comments Links to this post

Every year I have to start from scratch on the trade network, it seems. People move away, Like Veggie/Oil Man and the Kale Fairy did, or people stop producing anything I want, or people drop off the face of the earth, like the Baker Biker did - alas; I remember his marshmallows well!
So every year about this time, as the hens really start to crank out eggs, I have to place new Craigslist ads. I explain that we are all so stuffed full of eggs we can't walk, that I fear for my husband's cholesterol level, and we desperately need to offload some eggs. I talk about my happy hens, who are totally free-range on my five acres of pasture and I post pictures illustrating the difference between store-bought eggs and fresh farm eggs. 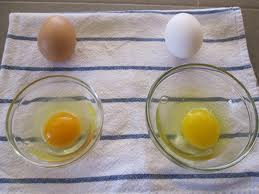 Farm egg on the left: bright orange, upright yolk and firm yellowish white. Store egg on the left: Pale, flabby yolk and thin, liquidy whites.
Not only do farm eggs taste better, I inform, but they have a healthier lipid profile and are crammed full of healthy Omega-6 fatty acids. I have not yet resorted to posting photos of industrial egg-producers with their battery cages and abused chickens. As my mom used to say, you catch more flies with honey.
In years past, I appealed specifically to gardeners by posting in the farm and garden section and using titles like "Eggs for Veggies!" This eventually works, but not usually until mid-May, when people have at least a little spinach to offer. This year I decided to post in the barter section and to leave it open as to what I was looking for. The title was simply "Eggs for....?"
In the body of the ad, I did list some things I wanted, like vegetable seeds or starts, baked goods, canning jars, etc. but also that I was open to hearing about anything people were interested in trading. After a couple of days, I got some intriguing replies. The first person to reply asked if I was interested in copies of The Rosetta Stone software (not really). Another fellow wrote saying he was a licensed massage therapist and could offer me a massage in the privacy of my own home on his folding table. Of course, this being Craigslist, alarm bells went off, but I decided to reply anyway. I said I'm not sure my husband would let me get a massage, but perhaps if he gave me the name and number of his office so I could verify...?
After verification, and asking permission from Homero (who said "as long as I can get a massage from a female therapist without you getting all weird"), I decided to go for it. When I spoke to the gentleman on the phone and gave him my name and address, he said "wait a minute! Are you the same Aimee I worked for a few years ago doing yard work in exchange for ham?"
Yes, indeed. Two years ago I was so broke and yet desperate for help that I posted an ad asking if anyone was willing to do some yard work in exchange for something I did have a lot of, which was grass-fed beef and homegrown pork products. "I realize this is unorthodox," I said, "but rest assured, although I don't have cash, I will HOOK YOU UP with the best quality local meat you have ever tasted. Also, I'll provide tools, transportation, and a nice lunch."
I actually got quite a few replies. This guy, who I'll call R., worked a couple of days for me cleaning out a whole buttload of blackberries and other assorted weeds in exchange for probably $150 dollars worth of beef and pork, plus a little money to cover his gas. He was a great worker, told me he lived pretty far out in the county, and was going back to school to get a medical assistant's certification, and doing whatever he could to support his large family in the meantime. I lost his number, or I most likely would have called him again a few times.
Having previous experience with R. and being fairly sure he wasn't a skeezy pervert made me much more relaxed. He came over yesterday and I enjoyed my massage very much. I told him I'd keep his entire family of nine in eggs for two weeks, which will probably end up being six dozen eggs. A steal.
Other trades in the works, though not yet finalized are a man who has a whole bunch of veggie starts and wants two dozen eggs a week; and a lady who is charging me two dozen eggs for four dozen bearded Iris bulbs, dug and ready to plant. I absolutely adore Irises.
Now I just need to keep my hens happy and well fed so they keep pumping out enough eggs to fuel my bartering schemes.

Posted by Aimee at 1:44 PM 6 comments Links to this post