I haven't done as much preserving as I had hoped lately. This late summer season has been incredibly busy - partly for good reasons (family vacations to see once-in-a-lifetime celestial events), and partly for really sucky reasons (my dad has been extremely ill and I've flown to Arizona twice). Plus, this year Hope is entering high school and there are all sorts of orientations and meet-and-greets to attend.

All this means I haven't had time to get to the Gleaner's Pantry as much as I usually do, and therefore haven't had loads and loads of produce to can, totally aside from the question of time. However, I've done a bit here and there. Last week I made four cups of fig jam, and today I've canned three quarts of salsa.

Cheesemaking doesn't count as preserving because we have to eat it fresh, but I've made some chèvre recently too. And soon we will be into apple season and I am planning to press a lot of cider. A new friend of mine lives nearby and has about twenty apple trees - enough that it makes sense to being the press to the apples rather than the apples to the press. We are going to make a day of it. And I think I will brew hard cider again this year, and that definitely counts as preserving.


Posted by Aimee at 4:04 PM 1 comments Links to this post 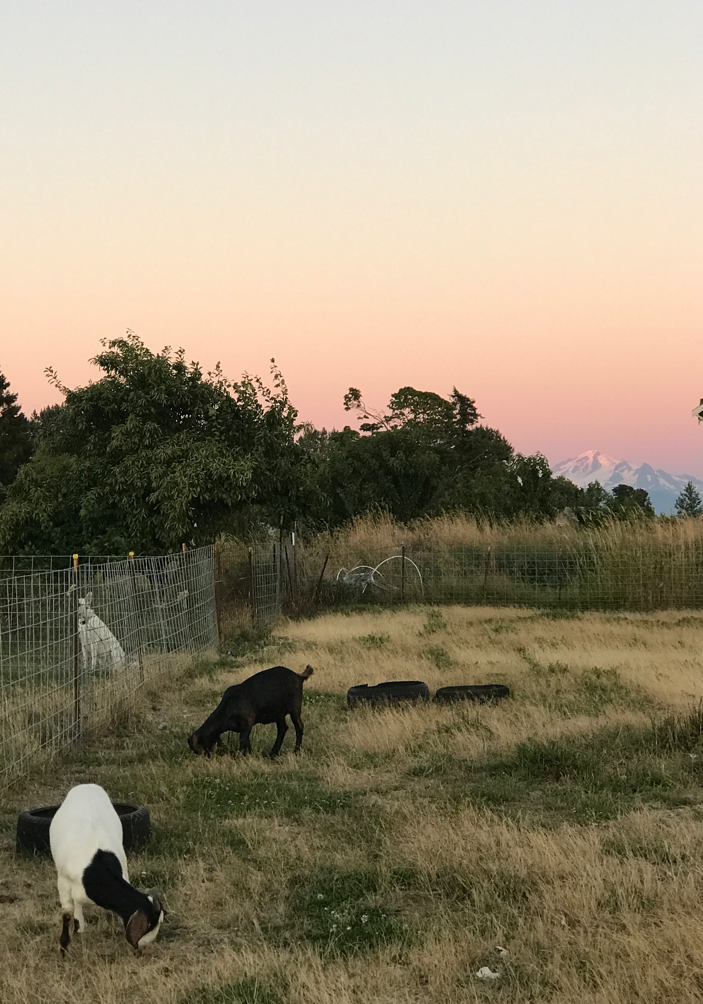 When we got home from our trip to Oregon to see the eclipse (WOW amazing sight and a great family vacation), I noticed that one of our mama goats, Polly, had become skeletally thin. She has always been a slender goat. Some
goats are naturally thin, some are naturally plump, just like
people. However, Polly's condition was in no way normal - her bones were sharp and visible from a distance.
There are many factors that contribute to weight loss on goats. One of the main ones - insufficient feed- is not an issue at my place because I have three acres of fenced pasture for three does to feed in, more than enough. Probably the most important factor after availabalility of feed is parasite load.
Goats are particularly prone to parasites. They are a problem in every area of the country. There are a plethora of parasites - stomach worms, lung worms, coccidia. For the most part, parasites will not kill an otherwise healthy goat, but they will seriously depress her ability to produce healthy kids, abundant milk, and keep her own health intact. https://www.famu.edu/cesta/main/assets/File/coop_extension/herds/Practical_Management_Internal_Parasites_in_Goats1_7-23-2007.pdf
I use ivermectin to control parasites, but over the years I think my herd has built up some resistance, because this year ivermectin is not showing much effectiveness. In particular, my best doe, Polly, has lost a tremendous amount of weight while raising her twins.
The caloric cost of nursing twins is, of course, very high, but a healthy doe with unlimited forage ought to be able to do it without losing condition. Polly has been losing weight, and when we got back from our five day trip to see the eclipse (AWESOME!!) she had suddenly become emaciated.
I worked her again, with Ivermectin as usual and also with Quess, a different wormer which has a different mode of action. Hopefully that will have an effect, but in the meantime I needed to get those kids off of her. They have been sucking her dry.
We have three kids left - Polly's twins and a single doe from Christmas. They are all of an age to have been weaned a month ago, at least, but I am softhearted and didn't want to separate them from their  mamas. Well, Polly's condition forced my hand. Two nights ago, I put all the babies into the sacrifice area. Such wailing! Such gnashing of teeth! Anyone would think they were being peeled alive. But no- they are just being weaned.
All three babies are seriously overweight. Obese even. They have "milk glitters" on their throats- signs that they are being over fed. And meanwhile their poor mamas are staggering around at the end of their endurance. I should have separated them a month ago.

Posted by Aimee at 9:18 PM 0 comments Links to this post 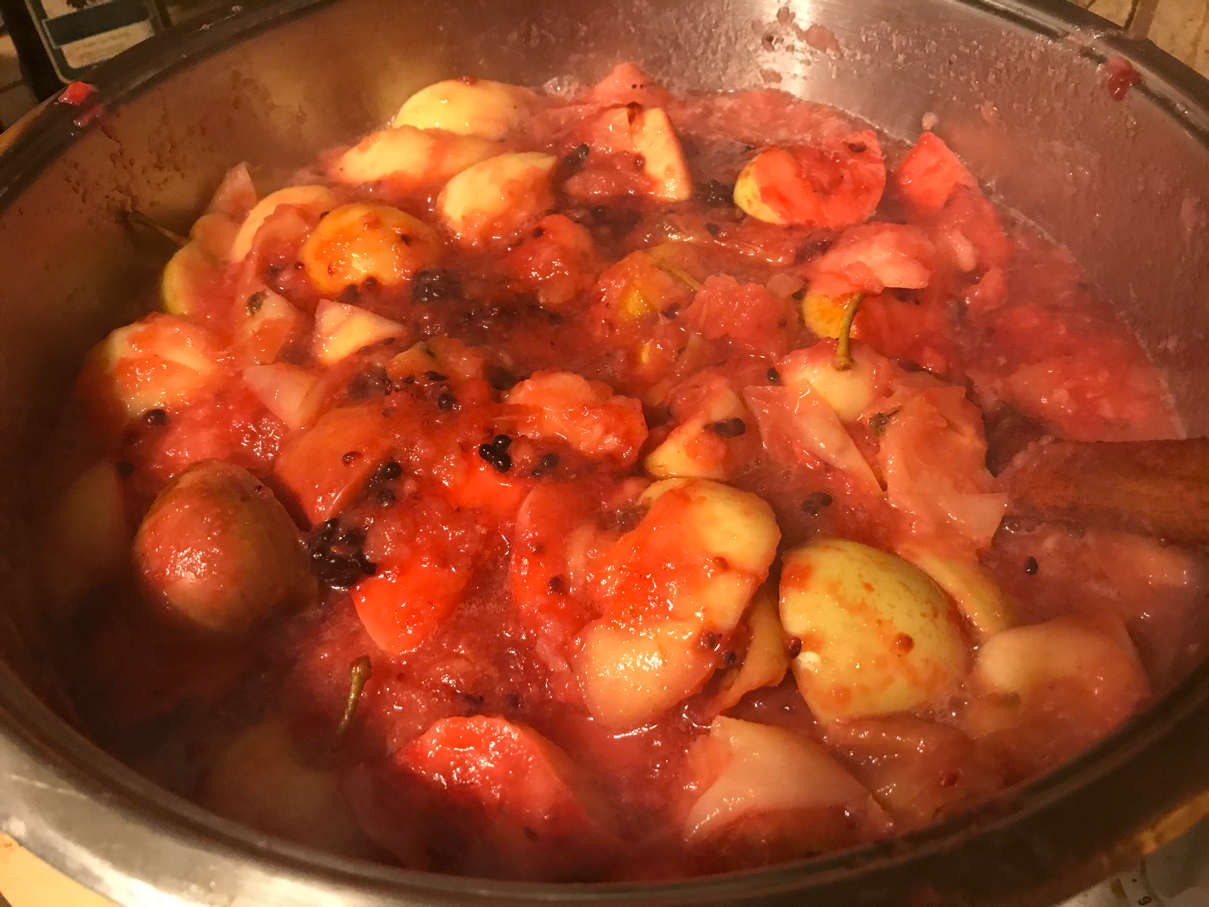 Surely one of the very best smells in the world is that of a bubbling vat of apples, enriched with cloves, cinnamon, allspice, and sugar. Doesn't hurt to throw in a quart or so of freshly picked blackberries, either.
Yesterday I went to a neighbor's house - a person who is becoming a very good friend - and took home two shopping bags full of transparent apples. If you, like my daughter, thinks a transparent apple is an apple you can see through, read and learn. Transparents are yellow apples that ripen early. They are specifically sauce apples, being good for not much else. They are too mushy to eat fresh, and too mushy to juice. But they make wonderful sauce.
I had invited myself over to pick apples after noticing, as I was driving by, a transparent tree that was dropping it's apples already. I asked if I could come collect some and she said "Please!" Once there, i realized that she actually has a serious apple orchard - about twenty trees of many varieties, and most of them are positively loaded with (as yet unripe) apples. I suggested that I ought to lug over my apple press later in the season and we should devote a day to cidering. That idea was met with enthusiasm.
Today was given over to making applesauce. Good thing I was recently gifted so many canning jars, or would have had to go buy a dozen quarts. A dozen quarts is what I ended up with - though I actually canned only nine of them, because that's as many as fits in my largest kettle. The other three are in the refrigerator. One will go back to my neighbor as thanks, and the other two we will eat quickly.
I've made some jam recently too. So the preserving log update is as follows:
9 quarts apple-blackberry sauce
6 pints blackberry jam
1 gallon dried apricots

Posted by Aimee at 6:36 PM 0 comments Links to this post 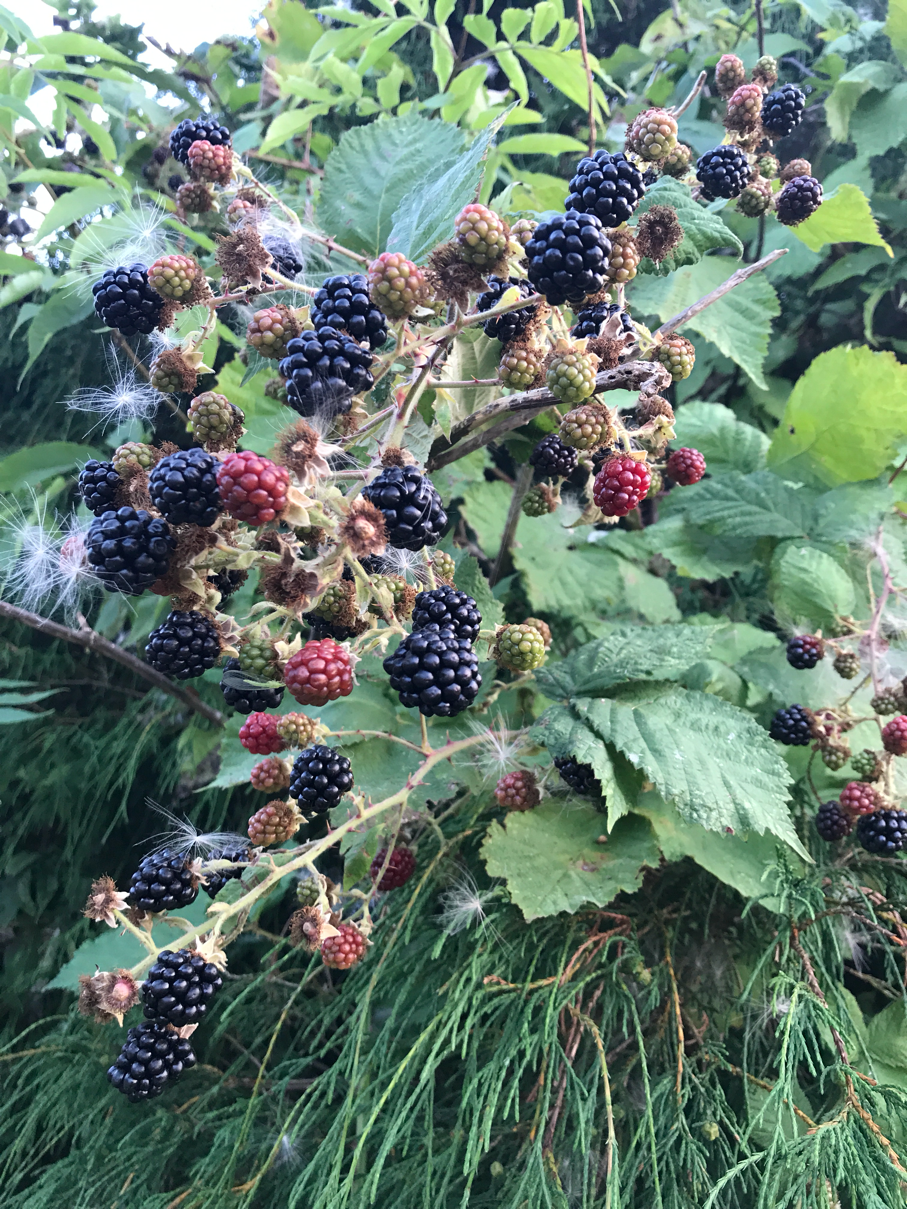 My youngest child, Paloma, says she doesn't like blackberries. Sadly, i see no option but to disown her.

Posted by Aimee at 8:47 PM 0 comments Links to this post The first blackberries are ripe. I picked enough for a pie today, while I was grazing the goats, though I didn't make the pie. Tomorrow maybe. More likely I'll just whizz them up in the blender with some yogurt and call it breakfast. There's going to be a bumper crop, and if I can get my children to pick enough, I plan to make jam. Haven't made any jam in a few years, and blackberry jam is the best jam. School is starting soon, and we will need sandwiches. Peanut butter sandwiches are exponentially better when they have homemade blackberry jam on them.
I was picking berries in a haze today. I refer not to my state of mind, but to the smoky air that has drifted in from big wildfires in B.C., across the border. Fires have been raging for weeks, and great swaths of the province have been evacuated. It seems that every summer brings more and larger forest fires than the year before. Two years ago (or was it three?) my mother lost her vacation home in the huge fires that raced across the Okanagon. The fires in B.C. this year are not yet as large or destructive as last year's. And right now there is even a fire burning in the moist hills around Bellingham, where fires have historically been rare. My sister's house is only a few miles from the edge of that fire.
Myself, I've been freaked out about climate change for longer than anyone I know who isn't actually a climatologist. Maybe Al Gore. Ten years ago, my friends were raising their eyebrows at me and shaking their heads when I regaled them with information about rising seas and failing crops. It's no comfort to me that the general population seems to finally be catching up to me in their level of concern. I worry that it's pretty much too late. This is a case where "better late than never" doesn't really apply.
Of all the many and varied consequences of climate change, I think the one likely to have the greatest impact in my lifetime and that if my children is the burning of the great northern forests. The past fifteen years or so, there has been a tremendous increase in not just the area of forest fires, but in their heat and destructiveness.
Many species of trees, of course, evolved in concert with periodic fires, and some can only propagate after a fire. Not googling at this time of night, but some species of evergreens have cones that only open enough to release seeds after a fire. Recent fires, however, fueled by drought and higher temperatures, have been much hotter than those with which the trees evolved; hot enough to totally destroy trees that used to survive a scorching. Around the globe, vast areas of forest are being burned in ragged patches. It's my belief that the next fifty or so years will see the great global belts of taiga literally go up in smoke.
Now I've thoroughly depressed myself. I can only comfort myself with the thought that from the ashes will certainly spring a host of blackberry vines. Out of the eater comes forth sweetness.

Posted by Aimee at 1:30 AM 0 comments Links to this post