Posted by Aimee at 6:30 PM 1 comments Links to this post

This cheese season will be a short one: we are going to Mexico for most of the summer. Over the past three years we have been slowly, by fits and starts, building a house in Oaxaca. The house is finally getting close to “done,” by which I mean the part for which we are paying professionals is nearly done, and we are approaching the parts that we plan to do ourselves.
The professionals (and it should be mentioned here that it pained my husband in the extreme to cede any part of the construction to professionals at all) have completed what in Mexico is called the “obra negra.” That means, more or less, that the floors, walls, ceilings, and roof are in, and the plumbing and wiring is basically finished. But there are no fixtures, no appliances, no lights or sinks or paint or flooring. Choosing and installing all of that, and choosing the furniture, is the “fun part.” We will be doing much of that work this July and August.
It’s been two years since we were in Oaxaca, and I can’t wait to get back. The children are excited too. However, it is beginning to become clear to me that when we elected to raise our children bilingual, binational, and bicultural, it was not an unmixed blessing we were bestowing upon them. I only thought of the benefits of having two homelands; it never occurred to me that being at home and comfortable in two worlds came with the drawback of always being homesick for somewhere.
When we are here, they miss Oaxaca, and their cousins, and the peculiar camaraderie and joie de vivre that life in Mexico affords. When they are in Oaxaca they miss their home, their rooms, their friends, and the American brand of privacy that does not exist in Mexico. I never thought about the fact that being a citizen of two countries means you are always pining for one or the other.
Meanwhile, here on the farm, cheese season has begun. I was lucky to sell all the goats I intended to sell this year - not just this year’s babies but also those from last year that I deemed unsuitable as breeding stock - which was all of them. I think this is the best year I have ever had for selling goats. I sold ten, altogether - seven babies and three adults - for a combined total of fifteen hundred dollars. That is, coincidentally, the exact amount I need as farm income, once every third year at least, to keep my favorable tax status as a working farm.
All of this year’s babies have now been collected, which means that I have three mammas to milk every day. And that means about three gallons of milk a day - a little less. And THAT means I need to be making cheese at least three times a weeks so far, I have made three batches of delicious chèvre, two cheddars, and a couple of queso frescos. My brother in law hooked me up with a woman who owns a fishing boat and sells Alaskan salmon - I am planning to meet with her and trade cheese for salmon sometime this week.
And now I have to go, because it is time to milk, yet again.

Posted by Aimee at 5:29 PM 0 comments Links to this post

Good Beltane to You! 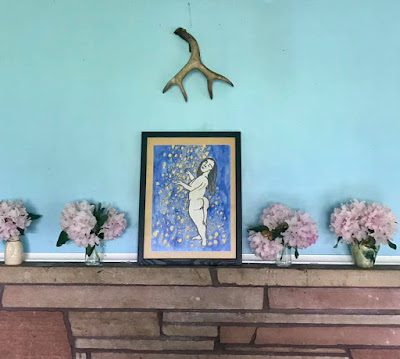 My Beltane Altar. I don't have any images specifically for Beltane, so I used this sketch of Danae welcoming Zeus in the form of a shower of gold. It's sketch for a larger painting, one of a series I did many years ago, reimagining the Ancient Greek tales rape or seduction as instead images of divine love and passion. In this same series I have Persephone and Hades, Leda and the Swan, and Europa being carried off peacefully asleep on the broad back of Zeus as a bull.

My husband went to a neighbor's house and cut me an amazing, fifteen foot tall cane of bamboo to make a maypole. We haven't decorated a maypole in a few years, and it's one of my favorite rituals. I have some witchy friends coming over, and my daughter Rowan, and I'm making a Beltane feast and I'm very happy.

Welcome to the divine bridegroom, who comes today to wed the Goddess. Welcome the quickening fire. Welcome the bearer of the flowering rod, the staff that brings forth water in the dry places. Welcome the loving, healing embrace of the Divine Masculine, of which this world is sorely in need.

Posted by Aimee at 12:53 PM 1 comments Links to this post