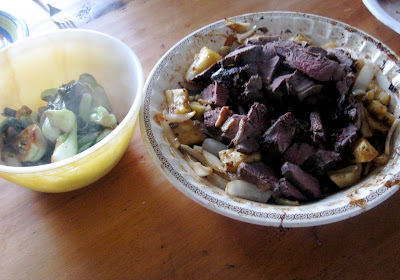 Okay, it was just us this afternoon for Christmas dinner, so I have to admit I didn't work to make it pretty. Last night we went to my mom's and had a very pretty (and very delicious) four course dinner of green salad, raviolis, broiled lamb chops, and too much dessert. This afternoon, I kept it simple.

A few days ago I pulled the duck breasts that I got from my hunter neighbor (New Trade Network Partners) out of the freezer and put them in the fridge to thaw. Then I ransacked the internet looking for some approximation of chinese barbecue duck that I could actually pull off. I warned Homero (the big duck-lover) that whatever I made, if he was going to compare it to what we got in Vancouver's Chinatown, he was going to be disappointed and I was going to be mad. He should try to wipe his mind clean of the memories of House of Hong and just enjoy my duck dish on its own merits.
Either he liked it fine or he did a damn good job of pretending. He ate three duck breasts. Myself, I've never really cared for duck and I find that truly wild duck is even less to my taste. My daughter Rowan said "if I didn't know better, I'd think this was pork," which is what many people say about duck, but I don't agree. It's far wilder and more bloody-tasting than pork. To me, it almost tastes like liver.
But I like liver. Go figure.
Anyway, here's what I did with the duck breasts, and if you like duck, you'll probably like this.
- One or two duck breasts per person (I'm giving the rest of the quantities for my meal as I made it: six duck breasts). If not bought from a butcher or grocery store but given to you by the hunter, you will probably have to singe the remnants of feathers off. I used my husband's propane torch, but a small fire of crumpled paper is perfectly serviceable. Use a very sharp knife to score the skin on each breast.
- half of one fresh pineapple, peeled and cubed
- one small or half of a large yellow onion
- tablespoon chili-garlic sauce
- 2 tablespoons orange marmalade
- 1/4 cup rice vinegar, unseasoned
- few tablespoons soy sauce
- ditto honey
- white rice cooked according to your usual method.
Preheat oven to 325
Combine chili-garlic sauce, marmalade, vinegar, soy sauce, and honey along with a little water in a small sauce pan and bring to a boil. Stir. Boil at a fast simmer until slightly reduced. Meanwhile:
Heat a scant tablespoon of canola oil in a large skillet. Lay duck breasts skin side down and fry over medium high heat until skin crisps and some fat renders - about five minutes. Remove breasts to a baking dish, skin side up. In the same pan, fry the onions and pineapple until lightly browned. Use a slotted spoon to scoop and scatter onion and pineapple over the duck breasts.
Pour reduced sauce over breasts and place in oven. Every ten minutes or so use a large spoon to turn and mix. We like our duck well done so I bake for about thirty minutes. I know that the fashion is for very rare duck breasts: if you want to do it that way, then lay the breasts on top of the onion-pineapple mix, raw side up, and broil, watching very carefully, for only five minutes or less. In this case, don't pour the sauce over before putting duck in the oven, but rather keep reducing it to a thickish glaze and pour over after breasts are done.
I served these with white rice and a side of bok choy. But thin chinese pancakes and plum sauce would be great!
Merry Christmas to all, and to all a good night!