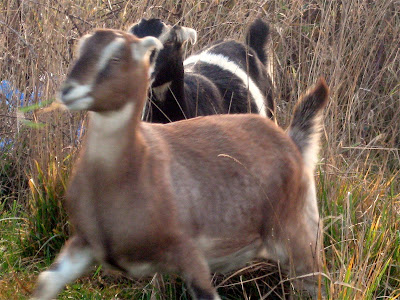 Goodbye, Sandy and Tutu (and Clove, not pictured). I sold all three goat kids to a Mexican guy who is throwing a birthday party and wants to put on a big ole barbecue. I don't how many people he's expecting, but apparently three goats' worth. I sold the three of them for $200.

I have mixed feelings about this. One - I intended to eat one myself. We were invited to the party, so I guess we'll get a taste, but that's not the same as putting a whole goat in the freezer. It's not that we need the meat more than we need the money - we don't - but rather that it means putting off for another year taking the large psychological step of killing and eating a kid ourselves. I want that task over and done with.
On the plus side, the Mexican gentlemen are going to do the butchering here, and Homero will be watching and learning. I'd like to watch and learn myself, but I think I had better take the kids and get the hell out of dodge for the duration. I made the mistake of letting the girls hear about the upcoming slaughter, and then I had such a situation to deal with! Such weeping and yelling! Such wailing and gnashing of teeth!
It's understandable. It's normal. I am sad myself, to tell the truth. It wouldn't stop me from enjoying a nice roast leg, but I'm not looking forward to seeing my sweet little kidlings killed and skinned. If the girls give me a legitimate excuse to be absent.... I'm cool with that.

Hello to the newest animals on the farm.... bees! This is just a photo I pulled off the web, since my camera cord is missing. But we have approximately the same setup - four hives plus all the ancillary equipment. Yes, you guessed it - Craigslist. Yes, I agree, it's maybe time for me to find a CL anonymous meeting - but in the meantime, I have a new hobby.
Or Homero does. His father used to keep bees and Homero has often expressed an interest in learning. I like the idea of bees for several reasons - honey, obviously. Better pollination of the orchard and the garden. The possibility of income. But mostly, it's the ultimate fulfillment of the self-sufficiency game The self-sufficiency game (love you, Dad).

Welcome bees! They're magical. Lovely to have around. And goodbye goats.

When we had the goat roas for the bautismo in Oaxaca, I had goat-pelvis marrow.

I love telling people that:

"I know what the inside of a goat's pelvis tastes like."

People in the USA generally have no idea how to respond to that.

you COULD put it slightly less grotesquely, if you weren't going for the whole shock/bestiality thing. By the way, you don't say how you LIKED the goat-pelvis.

I'm officially jealous. I am hoping to get a colony or two of bees in this spring.