Who Could Abuse This Pony? 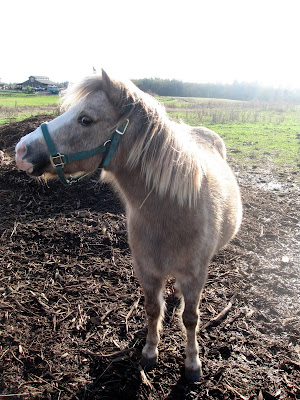 The farrier came yesterday. He's been working with Rosie for months now, but she's still absolutely terrified whenever he comes near. She trembles and tries to run away, she kicks and lashes out with her forefeet, she rears and whinnies. The poor farrier, who is an absolute model of patience and gentleness, has been kicked twice and knocked over in the mud a few times, too.
I don't know much of anything about Rosie's life prior to my acquisition of her, but the farrier says it's obvious that some bad things have happened to her. He thinks it likely that she was used as a broodmare. Broodmares with less-than-scrupulous owners don't have much interaction with people except when they are being bred or having a foal pulled from them, neither of which activities is any fun for a pony.
I had heard that she lived with a free running, free breeding herd on a big ranch in Eastern Washington and that she'd just never been handled much, but the farrier says that this kind of extreme fear is not normal. It's only about her feet: she can be haltered and led easily, and she's never tried to kick or bite anyone who wasn't trying to touch her feet. Well, now that I think about it the vet had a pretty hard time giving her her vaccinations.
I guess only time and persistent tenderness will make any difference - if anything ever will. At least I know that whatever Rosie's life was like before, it's a pretty good life for a pony now. She has room to run, pasture to graze, a herd of goats and her filly for companionship, and good health care. Maybe Rosie will never be a great pet, but she did give me Poppy, and Poppy is going to be an absolute joy and a sweetheart. 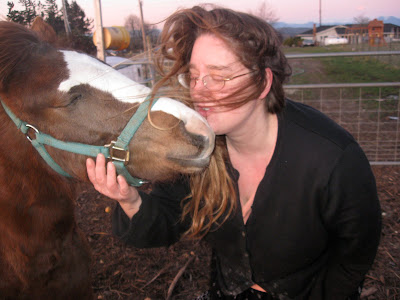 Such a sweet post.
I cannot imagine anyone abusing an animal! Rosie looks so sweet too. I bet with your love and kindness she will become unafraid. It is wonderful you room in your heart for Rosie!
Blessings to all the animals.
May you and yours have a very Merry Christmas.
Sherry

thank you sherry. I've begun reading your new blog, and it is very beautiful. Merry Christmas to you to and a healthy new year!