A few days ago, I was walking the property and making a mental to-do list. I like to to do this about every month - just walk the perimeter, checking out the fences; go up and down the pastures looking at weeds and rocks; scope out the state of the orchard and the compost pile and the outbuildings. Usually I take the camera and take a few photos of what's going on here and there and everywhere.
Looking at my photos, I see I didn't take any useful pictures that would help remind me of what needs to get done in 2010, so I will rely on my memory, impaired though it is by several glasses of New Year's Eve champagne. I did however, take this lovely picture of Poppy, still nursing although she is clearly several inches taller than her mama. Horsey people, spare me: I already know I should have separated them long ago. 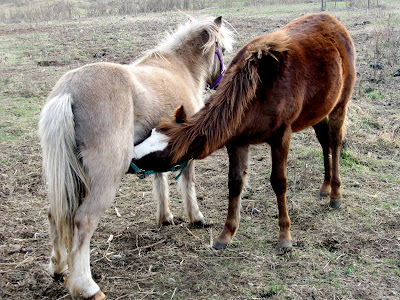 In fact, I may just make that my first resolution: Get serious about training Poppy to walk on a lead, wear a blanket, let me pick out her feet, and generally not be spooky. The farrier suggested I start her on long-leads, as she might make a very nice cart pony someday. She is an adorable pony, very sweet and affectionate, but all ponies need to be trained and the more I handle her the better. Let's make a concrete goal of thrice weekly training sessions, at least a half hour each.
Next: plan a garden. Yes: plan! That means draw out on paper how many square feet, what I am going to plant when and where, buy the seeds and get starts going by the first of February in the sunroom, and generally get my ass in gear. The vegetable garden in MY responsibility, not Homero's. If I need him to do some of the heavy lifting, like building beds or shoveling compost, fine, ask him... but the kitchen garden is the kitchen witch's arena, and I am she.
Next: Plant four to six new fruit trees and a hedge of hazelnuts. Of the original twelve fruit trees we planted, only seven are alive. Damn goats. There is only one apple left and it is pretty sickly. Considering that I own a press and cider is a long-term goal, I think I should plant four apple trees. I have three pear trees and two cherries, but only one plum. I'm going to say, four apples, two cherries and another plum. Plus three to six more hazelnut bushes. I'll need Homero to run the billy-goat brush clearer, but I'm willing to do the shovel-work myself.
And to protect the orchard, we need more fences. I'd be satisfied if we just do the minimum necessary to protect the fruit trees and the garden, but I'd really like to finish fencing in the whole property. Then I could just turn out the goats and the ponies to graze and browse and not have to be a full-time shepherdess. Also my damn fool dog Lancelot would stop bothering the neighbors and chasing cars. But fences are expensive and they are not something I can do myself, so I think it likely I'll have to settle for the minimum.
I think that's as much infrastructure as I can commit to. I'd like to install the woodstove. I'd like to get the rainwater catchment system running smoothly - I have 1,250 gallons worth of storage available and it seems a waste not to use it. But once again, not something I can do by myself, so I can't make any firm plans.
Areas where I can plan firmly include food storage: this is the year I'd like to complete my goal of having a full year's worth of food on hand and of preserving a goodly portion of that food myself. We have a new piglet who will be ready to butcher in April or thereabouts, and now we know a very fine butcher (Crecencio) who is willing to do the job for us, so I guess one of my resolutions is to preserve that pig. I bought an industrial meat grinder, and by God I intend to use it. Ditto for this next year's goat kids.
Cheese. Last year I learned to make fine hard cheese, but I didn't cure it or store it. This year I will. With three milking does I ought to be able to make a two-pound wheel of cheese every week and still have plenty of milk for daily use and for yogurt and cajeta. Out in the shed we have a half-size fridge; I'm going to ask Homero if he can modify it to be a cheese cave: 50 degrees F.
Okay the champagne is getting to me. I think I'm done for the evening. I may think of more resolutions, but if I get most of these ones done I'll be doing pretty damn good, if I do say so myself. Happy 2010 to all of you and may all your resolutions come true!

Good luck with all your goals, I can't wait to read about them on your blog!

somewhere marcus has his old garden plan from when he was at garden works. I plan to roughly go by that this year, when I find it (cross your fingers) I'll photocopy it for you. Wanna go in on some seeds, I think I have the territorial seed catalogue ?

I can imagine there is always lots to do on the farm. I applaud your plan to plant fruit trees - they are a great investment. I was very pleased by our apple and italian plum trees this year. If you don't already have a kitchen herb garden, most are very easy to grow, and pest free.

sis, yeah! But first I have to check up on some seed posts from other blogs... if I can avoid buying seed from Monsanto, I will. They now control over 90% of all seed stocks in the country, GMO and regular. Somewhere I have a link to places to buy seeds that aren't under Monsanto's thumb.

If you have access to Netflix, in instant view they have "Food Inc.," which I highly recommend viewing. It details the evil of Monsanto cornering the farming market w/the GMO seeds.