Too Many Roos, and Musings on Meat (WARNING - GRAPHIC PICS) 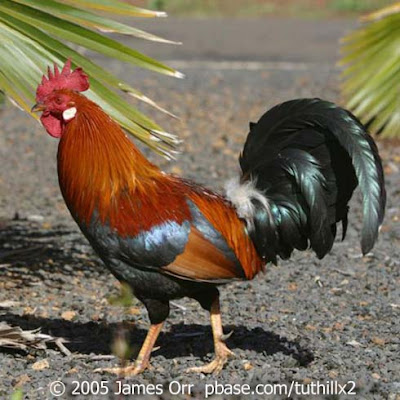 Although last year's chicks had a very poor survival rate (like maybe 25%) we still ended up with too many roosters. Now we have five, which is far too many for a flock of sixteen or eighteen hens. There are the original two, now about two and a half years old. I hear that older roosters are better at protecting the hens, so maybe we should keep these and get rid of the others. Plus, of course, these old roos wouldn't be very good to eat.
But there is one who hatched out quite early last spring and has become a real handsome guy; he's large, glossy, and gorgeous. Homero likes him and wants to keep him. The other two are just old enough to be recognizable as bona-fide roosters, and they are both scruffy and ugly, scrawny little crossbreeds - nothing much to look at. They are definitely going in the fry-pan, even though they are barely bigger than pigeons. That's the problem with raising one's own chickens. When it comes time to eat them, there's a lot of (very icky) work for very little return.
I have to admit, I have not yet been able to completely overcome the yuck factor when it comes to eating animals that I process myself. I have no idea why this should be: after all, meat from the grocery store is just as dead. A whole chicken from the store doesn't gross me out, but if I pluck it and gut it myself first, then it does. I don't like duck anyway, but I couldn't get over the yuck factor of the wild duck breasts that I carved out myself from the still-warm duck. The rabbit that Homero skinned and processed. Even the goats - although I wasn't around for the actual slaughter, I did see the big kettle full of body parts and watch the men doing the last bit of disjointing and skinning. 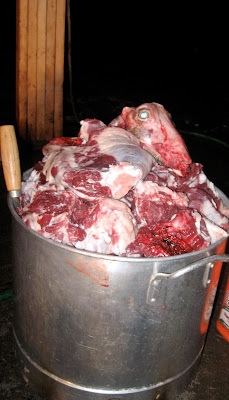 That part of it doesn't bother me - I didn't feel nauseated while the butchering was going on - in fact I found it interesting and wanted to see all the different organs. Only the next day, when I tried to eat some of the meat - which at that point looked, smelled and tasted great! - did I feel faintly sick.
This bothers me, and I really hope I get over it. I know intellectually that the meat I buy from the store is actually much more disgusting. If I saw the processes that led to it being there - not just the dangerous slaughterhouse, but the factory farm, the CAFO and the battery cages, I would be horrified. Presumably I wouldn't want to eat it.
The meat I raise here on the farm is, objectively speaking, much better. I know my animals are healthy. I know exactly what kind of lives they have led and what they have eaten, and my conscience is clear on all accounts. I treat my animals well and this place is adequate to their needs. So why do I still have this visceral reaction?
Is it just a natural reaction to death, blood and guts? Maybe I shouldn't be eating meat at all. I remember way back when I first was contemplating eating my own animals I said (very bravely, and very prematurely) that if couldn't enjoy meat from my own animals, meat that I was wholly responsible for, well then, I just shouldn't eat meat at all. I still feel that way - no, more accurate to say, I still THINK that way.
But I FEEL a little sick when I kill a chicken, and I only feel hungry when I order chicken at a restaurant. I'm going to have to try harder. I'm going to have to just try and get through it and get over it. I'm going to have to kill a bunch of roosters.
Sigh.

You know, Aimee, I haven't gone down the 4 legged creature butchering yet, but I know *exactly* what you're feeling. I can never, for instance, eat something I killed the same day, or the next, even. I thank the electricity gods for the freezer for that one.

What only helps me is doing a lot on any one day. That anonymity borne of just so much naked meat is helpful, somehow.

I feel the same way Aimee, I think its the smell of the wet chicken feathers and innards. I sometimes get a "whiff" of it when I eat roasted chook. Let someone else do the processing and freezing then all you need to do is defrost it and cook it..just as you would do if you bought it from the store.

We send our cattle to the butcher's slaughter house and pick it up in quarters and hang it in our cool room for a week before cutting it up and freezing. I dont have a problem with that at all, BUT...when asked to choose which one to send to its demise...I simply cant do it.

Here in Oz. our kangaroo is known as a roo. For a moment I thought your post was about them :-) We have them in plague numbers, would you like some? Very lean meat, not that I've ever tried it, looks too much like dog food to me.

Here is a good video on the subject: http://meat.org

I find it odd that I can't bring myself to hack off a rooster's head: in university I killed any number of animals for research, but I can't chop off a chicken head! My husband does the chopping, and then I butcher ... but I take the easy way out. There is, as you say, so little meat on one of those critters, so I just pluck enough feathers to get a clear area of skin, peel it back and cut off the good and easily accessible meat. It gets cut off in chunks, then put in the fridge ... fried up or marinated and put on skewers for barbecue, it's great. :) Once it's cold, it's just meat and I do okay - it's when it is still warm that it kinda bothers me.

That said, sheep and cows get processed by the butcher. I'm happy to honour their lives by enjoying the meat but ... yeah, I'm glad to let someone else handle the bolt gun.

When I was a kid, mom let the meat stay in the freezer for a while. I think that might be why she never had anyone refuse to eat it.

Right now, I work on a neighbor farm, processing (their word for butchering) chickens. For some reason, I don't have a problem eating their chickens, and I in fact have been known to start thinking about barbecue or pot roast chicken while working. It might be the face that they aren't my birds, but I hope that it carries through to when I'm doing my own.

Yes, my husband says he's ok butchering the chickens, but doesn't think he could do rabbits... The face, he says. I say, what about when there are 80 of them in a few months, climbing all over each other? And then, he feels, yes, maybe then.

Not that we have rabbits now -- just chickens. But I dream of more land, more animals, and more meat!

We have the same dilemma here with excess roos. Like Homero, I would like to keep an extra pretty boy.
No one here butchers. I have given many roosters away. Last year decided to take the excess to butcher (1.75 each). They were not very meaty, probably because they weren't raised to be.
This year it is the same thing... 4 out of 6 of the late summer hatch are roos. They are kind of gangly & not crowing yet. I will probably be giving them away again this year!

You know, that was a bloody interesting post. I always spout the 'if you couldn't kill an animal yourself you shouldn't eat meat' line but I don't know. Better as you say to have known the lives of the animals you eat as opposed to a cling film wrapped body part of a strange one. Food for thought, as they say.

I can only relate in a very small way, one time I caught 6 crabs, and killed them by my own hand. I was able to enjoy them stir-fried in ginger that same evening, but the killing experience left me quite shaken at the time, and gave me a greater sense of respect for my meal. I think it is the honest way, to butcher your own, not like us city folks who don't have enough respect for meat, since it comes to us so easily in the grocery cooler, in prepared and packaged portions.