Napoleon in the Garden 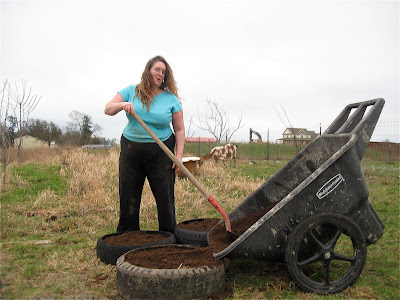 It was a productive day on the farm, although it doesn't look like much.
It surprises me how much work it is to fill and then empty a (large) wheelbarrow twice. That's basically what I did. Well, okay, I also sawed the top off of a couple of tires. I admit I used an electric saw, but that's still more work than you think it is. Previously, I had used a hacksaw to take the tops off of two tires and I thought my arm was gonna fall off by the time I was done.
Why am I sawing up tires? Well, I've decided that this year, I'm going to an all-container garden design, and tires are economical, seeing as how we have a buttload of them lying around doing nothing. Three years in a row, the weeds have kicked my ass all the way home, and I consider that a decisive loss on my part. Only an idiot wouldn't change his tactics, and I, my friends, am no idiot.
Tires do not represent the full scope of my battle plan: No; I also have a pair of recycled bathtubs and an old half wine barrel. Plus four or five rather large plastic bins of the type that nurseries sell trees in, and a flotilla of milk crates lined with cardboard boxes (the kind that once housed half-racks of Pacifico beer, Mexico's finest).
My troops consist of my own two arms (weak) and a pick, a pitchfork, a shovel, a rake, and the fruit of my loins. Two of them are under seven years old, and the other one is a surly teenager, so that means I'm fairly on my own. Oh yeah, and the husband can occasionally called to action for an hour or so.
The artillery is my compost pile. A heap of well-rotted straw, mixed animal poop, and food scraps about eight feet by six feet by three feet high; fluffy, golden, and virgin above, black as the stygian depths beneath. Each of my containers was filled halfway with deep, dark compost, and then filled the rest of the way with topsoil displaced from Homero's shop project. 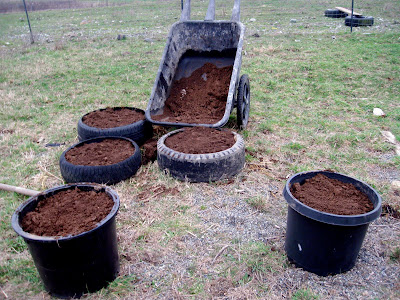 Since the soil was until extremely recently a foot or so underground, I think it will be relatively free of weed seeds. I plan to go ahead and plant spinach, radishes, and peas quite soon and then cover my containers with plastic wrap. That ought to keep the seedlings safe from my other enemies: the chickens.
The children were out playing all afternoon while I worked. About four o-clock, they came running to inform me they found a bird's nest in the big tree and would I please come and take a picture. I did, and here it is. 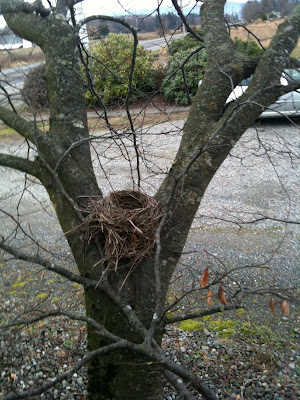 Cool Birdsnest. I have the same wheelbarrow and filling it is like filling 2 of the other type of wheelbarrows.

YEah, shovel work is hard. That movie, Mystery Men (forgettable) had William H Macy (unforgettable) as a superhero whose power was to shovel well. Really well. I buy it. I really do.

I envy that your weather is good enough to be working outside. (We're in the 20's today.)

A few years back I saw potatoes grown in a tire "stack". As the potatoes grew, they would add another tire and more soil. When it came time to harvest, you would disassemble the stack and sort through the soft dirt to find the potatoes! It took up much less space to grow many spuds - and no weeding!

I also love the birdnest :)

William H. Macy (funny how it's one of those names that just doesn't sound right without the middle initial) may be my favorite actor - top ten anyway. Have you seen The Maiden Heist? It's that very rare thing in American Cinema- an intelligent comedy. Homero and I both loved it.

farmgal - that's how my dad used to grow potatoes, though only two tires high. I think I will plant mine in the bathtubs.

Hey, about the weeds-- some book gave me the idea that mulch was the answer-- and carpet was suggested. I lay 2' wide carpet strips along the edges and between the rows of much of my veg. garden. It won't be featured on Mother Earth News' cover, but it works great to stop weeds, and a comfy seat to sit on to pick vegs. or weed.