Fear of Pruning and Unseasonable Weather

Very strange couple of weeks we've been having, weather-wise. After the cold snap ended, about three weeks ago, we entered an unseasonable warm spell. The mercury has been hovering between forty and fifty. For a while it was rainy and gloomy, then crazy windy, and yesterday the sun came out and hasn't stopped shining since.
Sunshine combined with warmth has made everyone and everything become suddenly springlike. The neighbor's pussy willow is very fuzzy. Even the earliest of the alders are showing their catkins. This is all just ridiculous - it's the middle of January, for Pete's sake. 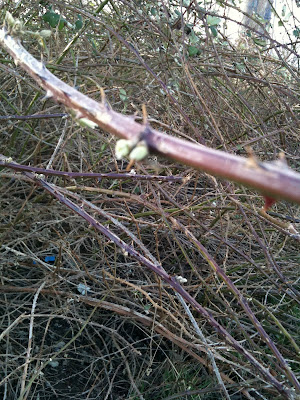 This blackberry vine is covered in tight little green buds, something I don't think I've seen before mid-February before.
I figured I'd better prune the fruit trees before the begin to blossom. Now, let it be known that I have never ever pruned a fruit tree myself before, even though I have, over the years, planted some twenty of them. I'm terrified I'm going to kill them. But today I was out with the goats by the trees and I looked down and lo and behold, there was a hoof trimmer lying there on the ground, so I figured what the hell. Why call somebody when I could do it myself? I HAVE read about it enough. I DO know the basic theory. 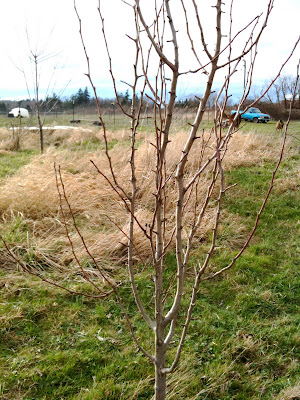 Here is a picture of one of the pears before pruning. Pear trees have a strong tendency to turn into thorn bushes after a year or two without pruning. Our giant old antique pear is in need of serious pruning, and I can't handle that myself, but this pear is still little enough I thought I might be a match for it. 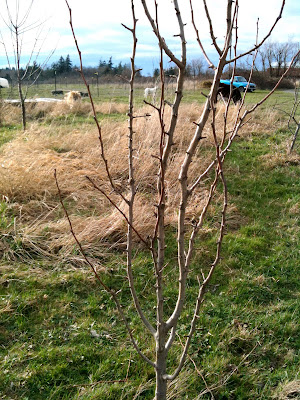 Here is the same tree five minutes later. Probably I could have trimmed quite a bit more, but I didn't want to get carried away. You can see I've taken off several of the lowest, smallest branches and generally thinned the tree out a bit, removing inner branches that cross over each other. There is also some rule about removing branches that form too narrow of an angle with the trunk - you want an angle greater than thirty degrees - but I didn't remove all of those. Too much of a softie I guess. Or a coward. 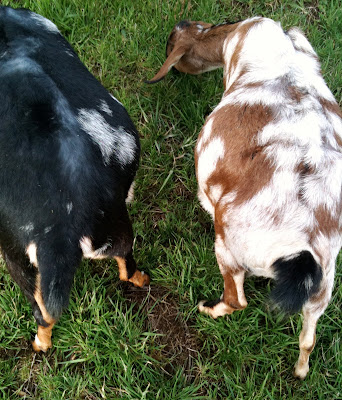 Lastly, here is a picture of Flopsy and Iris out enjoying the fresh green grass. They look extremely pregnant. Either they are both carrying triplets, or they were bred by Cloud and will give birth well before April.
I kind of hope it's the latter. I don't want to wait so long for baby goats!

Oh, I could use some lessons in pruning. I'm not so worried about the little apple trees I have coming this spring but we have a huge old tree that has been ignored here for many, many years. It even looks like someone cut it off near the base and it sprouted out and looks more like a 20 foot high bush. I'm not sure if it was ever grafted or if it was cut off above the graft but the apples on it were really tasty. We just need to figure out how to make it a bit more presentable.
Judy

Aimee - I'm no expert in pruning either, but it looks like you have the right idea, and the tree will be stronger and healthier for the efforts. I prune my espalier trees very agressively all year long, and they seem to respond well to it.