My hens are not laying very well. In fact, hardly at all - between the resolutely broody ones and the ones who are molting;  the ones I assume are laying out in the bushes somewhere, and the ones who are on strike or something. I am feeding twenty hens and getting five or six eggs a day. It sucks.
However, it isn't really affecting the trade network. Veggie man is happy to accept goat cheese in lieu of eggs. In fact, when I arrived today, his wife (Veggie-ma'am?) said "Oh no! More eggs!" Apparently, they have eggs left over from last week, when I brought four dozen. This week I brought 18 eggs and a half pound of red-pepper cheddar. 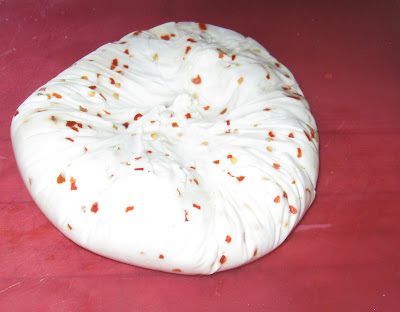 This isn't the "smokin' goat" chilpotle cheddar; it's just regular dried red pepper fl;ake cheddar. Spicy but not smoky. I find the chilpotle is delicious, but it's a bit overpowering after a while. Anyway, I value the cheese at $10/pound (a bargain) and so I had $8.75 to spend on veggies.
For which I got a princely pile: three decent sized eggplants, four big cucumbers, a couple pounds of new potatoes, about twenty peppers of various size and shape, and a pile of okra. I intend to pickle the okra with a few hot peppers tonight. When we lived in Ballard, in Seattle, we used to go to a cajun restaurant that had on every table a crock of hot pickled okra as an appetizer. My daughter Rowan LOVED it. She could eat a whole crock if I'd let her. I can't remember the name of the place now, but it had pretty decent gumbo too.
I need to use up a lot of produce. I have a scary amount of produce in the fridge. Theoretically, I should have already preserved most of it, but I kept thinking we would eat it fresh. Who am I kidding? Yes, I like green beans, but can we really eat several pounds a week? Plus two or three heads of cabbage, several gallons of assorted greens, a mound of turnips, four heads of fennel.... et cetera? No, we cannot.
I've been lazy and remiss in the preservation department. I blame the heat. Who wants to have a massive kettle o' water boiling away in the kitchen all day when it's a hundred and six degrees out? Not me, friends. What I have done is rinse and chop the kale, then stuff it back in the ziploc bags and freeze it. It's not the world's best preservation method, but it's fine to use for soups and stews later in the year. I wish I knew more about natural fermentation methods of preservation. I'd like to make sauerkraut. And kim chee.
Anyway. I'd better start researching how to preserve what I've got now. Maybe I can can some caponata... that would use up the peppers, fennel and eggplant. I have tomatoes as well. And basil. That's actually a pretty good idea. Tonight for dinner I'll have roasted baby potatoes and green beans. I can make curtido (a lightly fermented kind of latin cole-slaw) with the cabbage, and pickle the okra.
It's a plan.

it was burk's and they had AWESOME gumbo! They went out of business. God only knows why.

I found your Blog at another site and have started reading it from the begining. You can see how far along I am. But I though I would I would send along an easy way to make sourkrat.
After your cabbage is shredded pack canning jars (eather pints or quarts)with as much cabbage as you can get in leaving 1/2" headspace. Place a tablespoon of korsure salt into each and fill jars with boiling water. Place seals and rings onto jars and let cool until sealed. Store in a cool dark place for atlaest a month.
When I lived in Iowa(and married) we made 65 quarts one year! YUM!!