Here's what Homero's been up to lately: The Shop That Can Be Seen From Space is well advanced. Concrete poured, all the arcs up, and tools moved in. Two out of twelve junked cars moved in. We need to save money before we can put up the end walls. They didn't come with the kit and they ain't cheap. 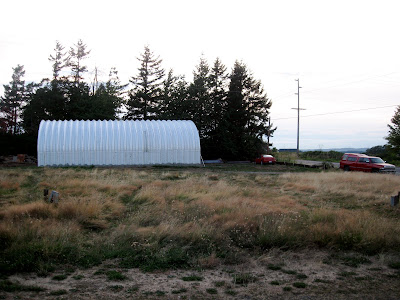 Making biodiesel. His one liter test batch came out good - so he says, though I'm not sure how he knows since he doesn't have a small-batch test-kit. He is confident enough, however, to make a 30 gallon batch, which is what he is doing in the above picture. Unless it looks radically wrong when it's done, it'll go in the beetle and we'll give it a whirl. Wish the poor beetle luck! 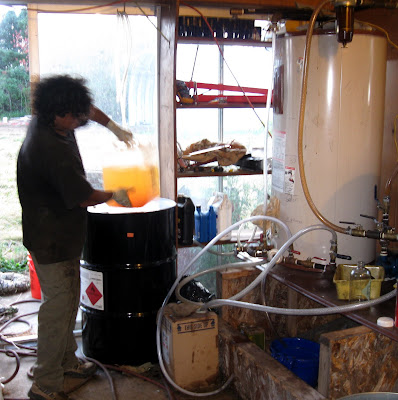 Here's what Homero's been up to lately (among other things of course).

Sorry, I had to LOL because it looks like he might be making "hooch" If it doesn't run the car, maybe .....?

Ha! Nope, I am the hooch-maker around here - well, that's my hope anyway. Last year my attempts at hard cider were a total catastrophic failure, but I'm going to try again this apple season.

Lol at "the shop that can be seen from space"!!! My husband looked at making the biodiesel and is still considering it but here you have to pay a taxe per gallon which is still cheaper then regular gas or diesel but defeats the purpose to us... Good luck using it!!

when it comes to making your own booze, I have some experience. I made several batches of good homebrew and even a mead that turned out nice. I imagine you know all this already, but:

The first thing is to have an extremely sanitary brewing area. Bacteria love the sugars in the various worts as much as yeast. The second is that wort for beer must be boiled. For mead it must NOT be. I don't know about cider, but I bet the temperature, etc. must be carefully controlled. If you don't have a floating wort thermometer, get one. They're awesome.

Generally, the wort has to be cooled rapidly to a specific temperature too before pitching the yeast. I used a bathtub full of ice water.

Lastly, I'm not sure what yeast you use for cider, but I bet it matters.