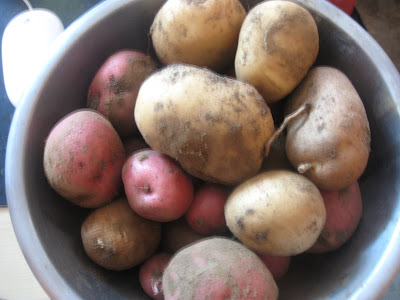 Second and final potato harvest. About the same as the first; more or less ten pounds. This second harvest has larger potatoes and fewer little ones. But all in all, I think both harvests were more or less equal - about three or four potatoes for each one planted. Or, to measure another way, twenty to twenty five pounds of potatoes from a plot roughly two feet wide by four feet long. The size of a coffee table.

That's very encouraging. Potatoes were my best crop this year, for sure. I did okay in spinach, in salad greens in general in fact. Radishes weren't half bad. Tomatoes are still coming on, but look rather anemic. But potatoes were very satisfying indeed.
Next year I'm going to try a vertical crop in old tires. Lord knows there's no shortage of those around here (and for those who are wondering, I read that noxious chemicals are bound to the vulcanized rubber and do not leach into the soil.). I've been following the blog of a dude who is growing his potatoes in a four x four x 6 foot potato tower and apparently you can increase your yield at least 50% by going vertical. Potatoes are just about the only practical staple crop around here, and I happen to love them to death.
In fact, I think I'll go roast some of these guys right now.