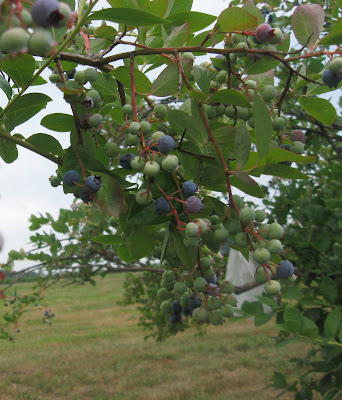 I had a couple of hours to kill today, so the little girls and I went to our favorite U-pick blueberry farm. I've been wanting to go pick blueberries for a while now, but I've been waiting for the beastly heat to subside. Finally, today, some clouds moved in and the temperature is a nice, tolerable 75.  Good day to go berrypicking!
Since it's only the first week in August, I expected that we would have to hunt for ripe berries. Usually the season goes from mid-August through much of September. However, this heat must have really accelerated the harvest! Every bush we looked at was loaded with ripe berries. All we had to do was reach out a hand and close it and we had a fistful of ripe berries. And sweet! Man, they are super sweet.
In fact, I think I'd better get on it and get in more picking quickly. Many of the berries are already drying on the bush into blueberry raisins. It just so happened that the farmer was out picking berries as well. He's an older man, about seventy, I'd guess, who bears an uncanny resemblance to my Dad. He had a kind of canvas hammock under the bushes and was simply raking his arms back and forth in the branches. All the ripe berries fell out, along with some leaves and other deritrus that he said would be blown away by air in the sorting machine. 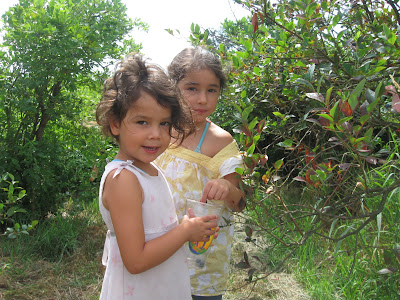 One of the things I love about this particular farm is that the bushes are very tall - in fact they are really more like trees. I'd say on average they are about ten or eleven feet tall. I asked the farmer about this and he said "well, that's because they've been neglected. They're about eighty years old, y'know." I told him not to prune them back: we love the fact that they provide shade, and that we don't have to crawl around on our hands and knees to pick blueberries. He said "I hear that a lot." The kids also love this place because they can run through the rows and get "lost" in the blueberry "jungle." Plus, it's the only place I know to get organic blueberries for a dollar a pound. For anyone who lives in Whatcom County, it's Hannah's Blueberries on Enterprise Road. Support our local farmers and get the best blueberries in town! 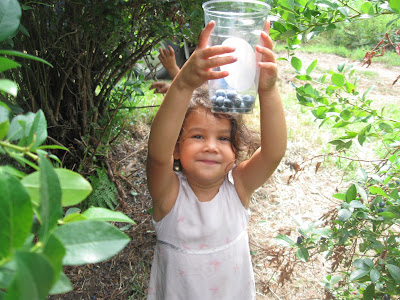 I LOVE blueberries, I wish I lived nearby so I too could harvest some.