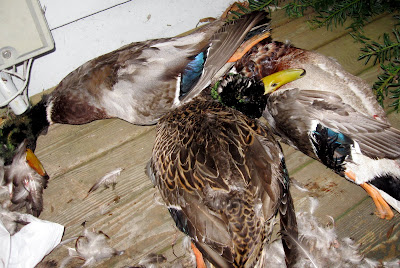 As I have written before, I have really, really good neighbors (Hay Hay Hay (Good Neighbors)!).
Honestly, the best decision I've made since I moved here was to join my neighborhood church - Zion Lutheran - and get to know some of the amazing people in the congregation; not to mention our wonderful pastor, Lydia. My life has been enriched in many ways by encountering Zion, and not the least has been in coming to know my neighbors, many of whom are old time farmers whose families have been in the area for several decades. These folks are without exception welcoming, friendly, knowledgeable, and generous. I consider it a compliment and a privilege to be accepted into the neighborhood by them, and I look forward to a long and rewarding association.
Yesterday - Christmas Eve - one gentleman among them who happens to be a hunter dropped by with a whole bunch of ducks. He did the same thing last year - showed up around 8 A.M. with a brace of mallards and showed me how to extract the breasts - which is all he uses, usually. Last Christmas Day, in fact, we ate duck breast. This year, he came by around the same time (duck hunters get up early, it seems) and dropped off a sack full of FIVE still warm ducks.
If you are a regular reader, you know that I have a lot of family here. My mother-in-law, sister-in-law, several nieces, and most recently a brother-in-law and his guest have all been staying in my house lo these past eight weeks. There are eleven mouths to feed, instead of the usual five. My neighbor knows this, and I assume that is part of why he chose to donate his kill to my family. Well, if this blog post chances to get back around to you, neighbor, please know that it helps! We have been dropping a lot of coin at Costco lately, and it does get difficult after a month or two. The ducks you gave us have provided several meals, and we all enjoyed them very much.
I have very little experience with wild game, and duck in particular is a meat that requires careful treatment; but as my family seems to have enjoyed this meat very much indeed, I humbly offer a recipe for how I prepared it. I make absolutely no pretense that this is the best (or even a good) way to treat wild ducks. It is only how I, in my ignorance, did it.
Oriental Spiced Braised Duck
Take five recently dispatched Mallards. Pluck (easier to pluck than chickens- most feathers can be pulled with bare hands without need of hot water. Singe off remaining feathers over a small paper fire). Gut, reserving livers for another purpose if desired. I recommend it; duck livers are delicious.
Place carcasses in a large pot full of hot, heavily salted water to which you have added several tablespoons of vinegar. Leave to soak for a couple of hours.
Four hours before the meal, remove carcasses and place in a large baking dish (or two). In a blender, blend two inches of ginger root, three or four cloves of garlic, a tablespoon or so of sesame oil and the same of neutral oil (such as canola), a tablespoon or so of soy sauce, the juice of one lime and one orange, a quarter cup of honey, and a little water. Blend well. Pour over duck carcasses and bake at 350. Turn pieces and baste every half hour.
I noticed, after a while, that the marinade was liquidy and the duck was getting dry. So I removed the duck, used a cleaver to chop each carcass into four or six pieces, and removed them to a couple of covered casseroles. I poured over the marinade and added several chopped carrots and a couple of roughly chopped onions. The casseroles were full, otherwise I would have added celery and maybe some beets (that's what I had in the house).
In approximately three hours total, the duck was as tender as it was going to get (this is wild waterfowl, people, let's not have unrealistic expectations) and giving off a fairly heavenly aroma. I had baked, along with the duck, a bunch of yams, and also cooked a pot full of wild rice. The casseroles were full of a lovely, dark, wild, bloody broth, which was beautiful spooned over a baked, split yam and a pile of wild rice.
Really, I couldn't have asked for a nicer Christmas dinner. Thank you, hunter-neighbor! Merry Christmas to all of you, and best wishes for a prosperous New Year!

Wow -- what a great relationship with your community, and your Christmas dinner sounded delicious. I hope you do something nice for your hunter!

Isn't it great to have good, thoughtful neighbours? Your Christmas dinner sounds delicious Aimee. It's always nice to share with your loved ones.
I wish for you...a Happy New year and hope that 2011 brings you much Joy.

That sounds so delicious. And what a blessing to have friendly and generous neighbours. All the best to you and your family for the New Year.

Hope your holiday was wonderful.

thank you for the recipe and feather plucking advice - very timely as we are currently growing some of our own ducks and will be eating a lot of them. Having never done this before it's nice to read that it was pretty simple to pluck them!