Big Piece of the Puzzle (The Advantage of Family) 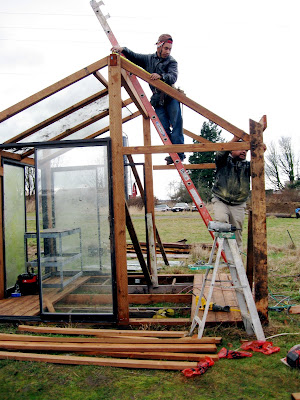 There are a few advantages to having six houseguests for several weeks over the Holidays. For one thing, my husband and I have been able to go out on a couple of date-nights without needing to worry about finding a babysitter. Abuelita (Grandma) has been available on an as-needed basis.

Of course, as I have documented, it has been great to have my sister-in-law Temy here to teach me how to use my sewing machine. One day, I hope I will be able to actually save us some money by making a few of our own clothes, curtains, and pillowcases. Rowan, my teenage daughter, has aspirations to be a theatre costume designer, and Temy has set her on the path. Rowan has actually begun to design clothing and make some pretty impressive pieces.
And now that my brother-in-law Fransisco has arrived, I am really beginning to derive some serious material benefit. Last fall, I gathered materials to make a greenhouse on the foundation that used to support our falling down shed we called The Parthenon. (Nasty Weather and Unfinished Business) Given my experience with my husband's efforts as carpenter (A Handy Man is Good to Find...?) I think I can be excused for not wanting Homero to build the greenhouse alone. The foundation languished for some eight months, until the other day when Fransisco said he'd be happy to build me a greenhouse.
To be honest, Fransisco doesn't have very good estimating skills, or else he wasn't honest when he said it would take one eight hour day to knock it together. We are now on day three and less than half done, but even so I am thrilled to the marrow. I can see I am going to have - eventually - a terrific, good looking greenhouse. I will be able to grow food for ten months out of the year instead of the six months that our natural short season allows.
Every year, I start to get excited about the garden in mid-February. In the past, I had to contain that excitement for another month and a half. Now, I can actually start planting when I want to, as soon as the days get long enough. Come on, spinach! Yay, radishes, arugula, onions, and chives! Woo-hoo, snow peas and broccoli! Thank you, family!
A few weeks of high grocery bills, water and electricity bills, and a few extra trips to the dump is really nothing compared to the lasting value of a solidly built greenhouse... not to mention the incalculable worth of my children's closer relationship with my husband's side of the family - their Grandma, Auntie, and cousins. And of course, their understanding of their Mexican heritage. Really, the benefits of this situation FAR outweigh the deficits. It is just occasionally hard to appreciate that fact when you want to, oh, say, make love to your husband and there are fourteen relatives less than six feet away.
But there will be plenty of time for marital relations when the family leaves in a week or two (or three... or four... I have no way of knowing). IOn the meantime, I must simply keep reminding myself of the myriad benefits of having the extended family around. And keep ignoring the drawbacks.

That's looking good. It's a man thing, that time estimating lark. I always figure I'll be done within an hour, but then I start getting finnicky about little things, and it must be right, and it has to be done properly and suddenly it's July!

Thats great! From the looks of it, its about the size of the one that I want to build on our farm as well...hope you will update with more photos when its finished. You are lucky to have such a skilled family...though I know what you mean about the crowding.

That's awesome. Question: doesn't temperature matter a lot too? I mean, I know a greenhouse is warmer than the outside even in a dark winter, but not too much, right? I mean, you can't have a lot of insulation.

By how much does a green house actually extend the growing season?

Bro -
Off the top
Of my head I'd say a greenhouse - well sealed - will
Maintain a temp
Of at least fifteen or twenty degrees F above ambient. Yes of course temp
Matters, many seeds won't germinate below a temp of fifty to seventy degrees. Cold wether crops can be started in a greenhouse a full month or more before you could start outside. The main advantage is that this allows you Ro grow crops that require a longer season- here for example tomatoes, chiles, eggplant, okra, sweet potato, etc.

But why on earth would a person intentionally grow eggplant or okra?

Drawbacks? Backdraws? What? naaaa. Let them come to my condo and stay for a few days. I'll take them to see the sights and they'll have a blast. WE can check out the Pike Place Market and see the Snoqualmie Falls, and just hang out. I would love it.

Let me know and I shall come and get them any time.

One grows eggplant for melanzana, one of the great treats of Italian cooking, It is known to Americans as Egg Plant parmesano. And it is DELICIOUS. As for okra, your guess is as good as mine. Fried it has too many calories, adn unfried it is inedible.

If your daughter really wants to be a costume designer, I suggest she learn about lighting and maybe even set design as well. Costume and lighting designers who work well together can make real magic as they go hand in hand, plus its always good to have a second area of expertise. The designers I know who work the most are capable in set, lighting AND costumes.

Just thought I'd toss that out there.

On a side note, I don't really suggest anyone focus solely on a career in theatre these days. I'm not sure the professional theatre has a big future in the looming low energy economy. I know I am hesitant to redirect much personal energy into my theatre career for that very reason, certainly beyond the next 10 years.

And since its that time now, Happy New Year to you and yours.

Jerry, thanks for the input - I totally agree. She has already made some set pieces for a local production. She's a painter and can make scenery, design posters, etc. Costumery would be the next piece of the puzzle for her. We have talked about whether theatre is a realistic choice, but she loves it, and so I encourage participation in local small town theatre. I'd insist that her degree be something a little more marketable - like, say, commercial design.

I don't blame her in the slightest. Theatres, especially the more intimate ones, are one of my favorite places in the world. It's like its own separate existence, a little individual universe...full of magic and spirit. I love being the last to leave the stage at the end of the day, shutting off the work lights and leaving with just the ghost light burning in the centre of the stage.