Yesterday, Homero had a major triumph. The Shop Visible From Space is officially finished; the county building inspector came out and inspected it, and then signed the certificate of occupancy. Homero now has a big ass legal shop. It isn't, however, actually finished. He still has to build the doors, and he still had to tighten all the 10,000 or so screws which hold it all together.
Tightening the screws involved crawling all over the skin of the shop, which is an arched tunnel some 40 feet high and 65 feet long. I had no idea how he was going to do such a thing until I saw his truly genius solution. He made a rope ladder which consists of many, many wooden steps connected by a double strand of rope knotted between each step. Then the entire ladder is thrown over the building and anchored down on either side. One person climbs the ladder and tightens the screws from the outside, while another person tightens them from the inside, which involves standing on a wooden scaffolding built onto the bed of a pickup truck. Both the rope ladder and the scaffolding can be moved along the length of the shop as needed. Alas, I don't have a photo of the scaffolding, but it is truly impressive. It's about thirty feet tall, all mobile on the bed of his chevy pickup. He calls it the "Caballo de Troya," or the Trojan Horse. I promise to get a picture before it is dismantled! This morning, the day dawned bright and clear, one of those crystalline winter mornings where the entire world seems to be made out of icicles and light. The mountains were painfully brilliant, shining and white against a cold blue sky. Homero went out to work, but shortly came back in and said to me, "Amor, you have to come out and climb up on top of the shop. The view is so beautiful from up there. Please come."
I was torn between terror and longing, but longing won out. Nothing, I decided, would stop me from standing up on the rounded peak of my husband's shop with him and looking out over the magnificent peaks with my arms around his shoulders. I crawled up the ladder and pulled myself up like a worm on my belly, slowly and painfully, until I could extend Homero my hand and stand up. My knees were trembling and my teeth were chattering, but it was wholly worth it. Very few moments in my life match today's: holding on to my man's strong arms, standing high above my own land and home, face in the wind, looking out on one of God's great vistas.
My photography is entirely inadequate to the task of showing you what I saw. I don't know why it is that the mountains that crowd the horizon shoulder to shoulder, looming like frozen giants to the naked eye appear so timid and midget in the camera lens. It is surely my fault. Please magnify the mountains about 10 times in your mind's eye. 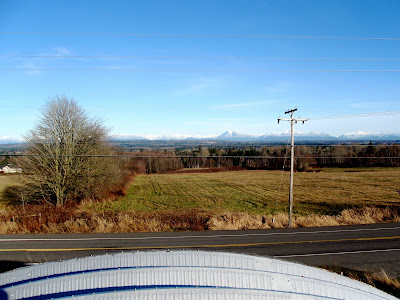 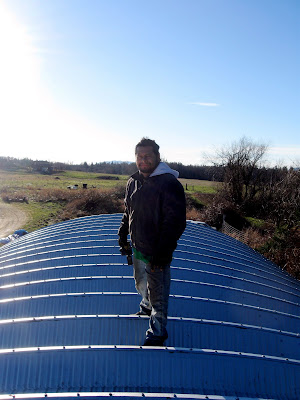 I'm dead certain that no other mechanic on Earth enjoys the view that my husband does. What a beautiful part of the world we are privileged to live in! I'm so happy I climbed up, even though my thigh muscles hurt and I was deeply ashamed to learn how timid and weak I've become in the last twenty years! I did not make a pretty picture hauling myself slowly and painfully up the rope ladder, nor letting myself down inch by wobbly inch. As you notice, there are no photos of me making my ascent or descent. Whatever. I don't care. Weak and wobbly as I am, today I stood on top of the world.
And it was good. It was very good.

Enjoyed your post Aimee. Well done to Homero. The view .. magnificent!!
No one would get me up there, but then I have an excuse, all 75 of them. :))

What a triumph. I enjoyed imagining the view from there (but tried not to imagine the climb up and down).

What a lovely post, Aimee! Thank you for sharing your top-of-the-world experience. Congrats to Homero on (almost) finishing the shop and congrats to you for making the climb!