Ladies and Gentlemen, Start Your Kayaks! 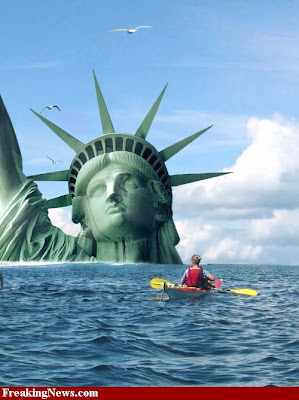 This is exactly what it looks like at my house, except for the fact that the statue of Liberty isn't in my backyard. It's been raining for a week, pretty steadily, and pretty hard. There is no dry land anywhere on the farm - it's all either ankle-deep puddles, knee-deep mud, or shallow rivers.

I meant to get chips ordered two weeks ago, during the snow. I knew then that when the cold snap was over, mud season would begin in earnest. But between Thanksgiving, in-laws staying indefinitely, preparations for Christmas, and oh yeah, six different kinds of home-improvement going on, I didn't get around to it.
Poor animals. The horses have been moved to the winter sacrifice area, and all they have for shelter is a three-walled field shelter. They are pretty miserable looking and I think they need blankets. The goats have the big barn to themselves and so they are pretty happy. Chickens can go wherever they want, of course, but there's just nothing on Earth shabbier and sadder-looking than a wet chicken.
The dogs don't even want to go outside to poop. We have to shoo them out into the driving rain and they immediately scratch to get back in. Then we won't let them in because they are so muddy, so they live in the playroom. The playroom is getting pretty gross, too.
Ahhh well, what can you do? This is life in this part of the world. Six months of mud. It's the price we pay for not having to deal with either extreme heat or extreme cold practically ever. Just keep thinking about our beautiful, comfortable summers. And keep a pot of soup on the stove at all times.

was wondering how yall were fairing out there.. while yall are floating we are in an ice age .. its nuts.. whats the extended family think of your weather....hopefully you dry out some before they leave n they can help you clean all the mess up for a lil while atleast...

Just about anyplace gets muddy when it's wet and the grass is ruined, right? But can't you put down a ton of straw or something? Still plenty wet, but not as muddy, right? Surely a ton of straw can't cost more than $50?

We are lucky here in that our property drains very well, so we don't have to contend with mud. You do get tired of all the rain, but I would rather have that, than snow, as I have to drive some rather steep roads in my work, and sometimes I can't get out at all, when the roads are bad.

bro, I learned two years ago that putting down straw is worse than nothing at all. It disintegrates within a week and becomes deeper mud. The only permanent answer is regrading, which we can't do. Next best thing is drain rock, which is massively expensive. Third best is wood chips. Also expensive, and they only last one year, but better than mud.

You have rain, we have snow.

By the way, this is one awesome picture. I haven't seen it before.

I hadn't noticed newtofarmlife.blogspot.com before in my searches!
This is such a stupendous resource that you are providing and you give ground it away in place of free. I love seeing websites that catch on to the value of providing a standing resource for the sake of free. It is the hoary what goes in every direction comes circa routine. Did you acquired lots of links and I over lots of trackbacks??

Anon! That's just what I was thinking!