I've barely been able to come up for air this past week. It feels like all I do is milk, morning and night. The weather has been absolutely disgusting - cold, grey, and unrelentingly wet - and no matter how careful I am, I always get grubby doing the morning chores. It really puts a damper on your day when you start out chilly, muddy, and smelling of four different kinds of animal shit. I have to get up extra early to give me enough time to take a quick shower after chores and before leaving the house.
It's time to trim the goat's hooves again, but I just can't face the disgustingness of the job right now - I'm waiting until it dries out a little. Seems like many tasks are waiting for something or other - usually for money to become available (ha!).
Several weeks ago, I began a project near and dear to my heart: tearing down the Parthenon (read: falling down shed full of trash) and using its foundation to erect a greenhouse. The impetus for this project was a friend from church telling me that a buddy of his had a huge job tearing out old sliding glass doors on a large condo and was selling the glass panels cheap. We bought fourteen panels for ten bucks each. With the glass in hand (so to speak), we went ahead and tore down the old shed. Many boxes were thrown away, and a few items of value were recovered (like the deed to the property. Yes, I admit I was wrong - never throw away a whole box without looking through it, no matter how long it's been sitting unopened in an old shed.). In one day, Homero and one other guy took the shed down to the foundation. 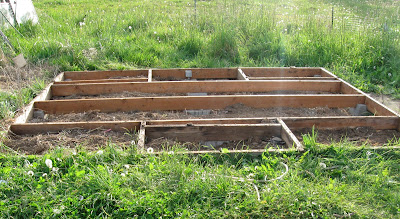 Now there was a tricky part - I really didn't want Homero to build the greenhouse. I wanted someone who actually knew something about carpentry to do it. Lest you think I am being overly persnickety and/or just plain bitchy, please know that I have PLENTY of hard-won personal experience that informs me without doubt that my husband, accomplished though he is in many fields, is NOT a carpenter (A Handy Man is Good to Find...?).
Instead, I reached out to the trade network. Mr. X is a decent carpenter and willing to accept partial trade for one of our 275 gallon totes. He wanted it for his hydroponic greenhouse system. He had also recently built his own (very nice) greenhouse, so I knew he was capable.
Mr X drew up some rough plans and made a materials list and when he saw it, my husband pulled the plug on the project, saying we didn't have enough money right now.
Then he went and took a week off work to make a totally unnecessary trip to Mexico, which cost us considerably more than the greenhouse would have, without providing any (material) benefit. Such is marriage, am I right?
Mr. X took it well enough - I told him to go ahead and come get the tote, and we'd just apply it to his first day's work whenever we DID get it together to build the greenhouse (hopefully before fall planting season). As always on a farm, there are plenty of other unfinished projects - the biggest one is probably figuring out what to do about the rotting wooden floor of the main barn. The horses are starting to put their feet right through the floor. That's not good.
I have an idea, but I can't write about it right now, because it is time to go milk the goats again.

Aimee, do you know the singer, Helen Reddy? You remind me of one of the songs she is famous for.

I dont know you Aimee except for what I read on your blog but let it be known...I greatly admire you and your achievements.

Olive you are a dear. Thank you - it actually means quite a bit to me to hear that! You should know I feel the same way about you - from your site it seems you have put a great deal of work into your little slice of the world, and it shows.
Happy Spring (Fall, I guess, for you)

hey, have you tried making soap with all your extra milk? I didn't think about that yesterday.

Your cup seems to be running over with projects-we are the same way. Always something that needs to be done, and then some.Our hooves are in need of trimming, as well, I just haven't been able to bring myself to drag the big goats out of their new enclosure all the way up to the top field where my milking stand is. And there is no way I can trim their hooves without having their big heads in a lock.

I think you rock.
I know your greenhouse will get built, and you will be proud of it.

Men, "we can't live without them and can't live with them" Hmmm! I think I will revise this quote. *chuckle*
I feel for you and all you have on your plate. Hang in there, just like Olive points out, the Helen Ready song is right on.

Have you ever heard that song "I feel so sorry for you with all your goat cheese"? You haven't? Well I'm playing it right now on my tiny violin.

polly - soap is a byproduct of biodiesel production (though really, not very nice soap) so I haven't thought of using milk for that, no. I'd rather make cajeta.

Sis- did you make any cheese with that gallon of milk I gave you?

there are two goat farmers in our area who raise their goats exclusivelly for milk for soaps. they use a cold method-have no idea what it is, but they say it does not burn the milk. They also make lip gloss, bath salts, etc. Pretty neat stuff.
My BIL made biodiesel for a while, but never used his byproduct to make soap, he is not into this kind of thing. Now he has sold his equipment.

I make goats' milk soap. I use lye and natural oils. While it's fun to do, and nice to use, it actually uses very little milk and takes a good bit of time to do, which is antithetical to your cause right now. What you COULD do is freeze a gallon or two to play with in the winter. Frozen milk is the best for making soap. Just freeze it in small batches so it can be broken up and measured.
I milk 19 goats every evening (I teach during the day); I feel your pain.