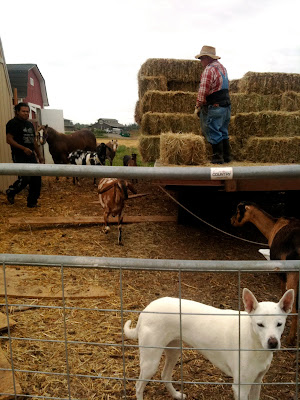 I have some very very good neighbors. At the church potluck the other evening, Mrs. B. asked me if we'd be needing any hay this year. I said, "we sure do! But our pickup truck is out of commission at the moment. I'll have to figure something out and let you know."
Next morning, her husband calls me and says he's got the hay all loaded up on his trailer and he and his neighbor Mr. M. can be at my place in fifteen minutes if my husband were home to help them unload. Mr. B. and Mr. M. are both retired gentlemen of an age I wouldn't like to guess at, but at least as old as my parents. They, along with Homero, unloaded and stacked seventy-two standard sized bales of very nice local grass hay in about an hour. By the end, the two gentlemen were a bit sweaty and winded, but so was Homero.
It was great to listen to them talking about their younger days. "When I was twenty, I used to do this all day long," said Mr. M. "And milk the cows before and after." Mr. B. told a story about haying with a teenage boy some time ago who complained he couldn't lift the bales high enough - when Mr. B. picked up a bale and tossed it up where it needed to go, the teenager suddenly discovered the resources to match the old man. After we finished, I poured everyone some coffee and we all sat on the hay wagon and talked for a while.
I love the people I've met through church - it's wonderful to have access to people who are real farmers, people who have been farming and ranching in this area for many decades and know just about all there is to know. There aren't a whole lot of real old farmers left around here, and in ten or twenty years there might not be any. I am so happy and feel so privileged to have met these folks, and any chance I get I discreetly pump them for stories and memories.
Not to mention, they are flat out some of the nicest people I've ever met. Last fall, Mr. M. brought me some wild ducks he had shot because he heard me talking about how much my husband loves duck. He taught me to butcher them, too. His wife is one of the warmest, most welcoming ladies at church. There are other great old farming families too - The other Mr. and Mrs. B. who live up the road and raise beef cattle, for example. My greatest hope in life is to eventually become one of them!

It is amazing to me how fondly we look back on times of hard labor. How proud we are of it. I remember a few summers of carrying felled trees from one site to another in Florida, digging trenches in Iceland, laying concrete in Bolivia, for which I had first to route wheelbarrow loads of stone. Working from dawn to dusk with my hands and back as a teenager. Finishing the day exhausted, filthy, cut, bruised and spent. They were among the best times of my life. Even though they were full of misery and hardship.

I still don't know how to reconsile those disparate feelings. But I know that I wouldn't trade it for summers of leisure and indolence.

I'm having a great leisurely, indolent summer day today, though. After milking and putting on the new bee boxes, all I'm doing is lying around the new pool watching my kids splash and reading magazines. I might make some iced tea later.

The people from that generation are amazing. I love my grandparents' and their friends' stories.

And I'll never UNLEARN cooking and baking with my grandma. That's the kind of thing I will keep and pass on. :-P

I`m not one to talk but was the dude on the trailer as short as that picture makes him look?

When I was about 14 I had to start helping with the haying. I remember nasty hot dry dusty afternoons on a wooden platform being drug behind the baler, picking up bale after bale, making stack after stack and driving a crowbar into the ground to push the stack off the trailer. Then a couple weeks later we would go out with the truck and load up all those stacks, bring them in and re-stack them.

I can`t say I enjoyed much of it at the time but now I can definitely appreciate the fitness aspect, as well as the simple honest work aspect.

As for that old-timer generation, I admire them a great deal as well, especially the out-going ones like you mention. But I grew up around a sort of spiteful, judgmental and work-obsessed grandmother who felt that any time spent not working was highly sinful. Yet I doubt I could have had a better example of frugality and honest work.