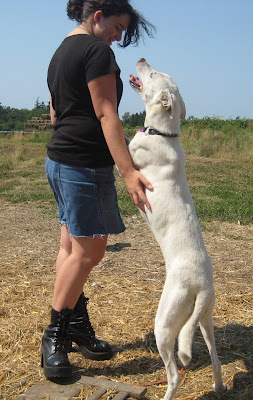 At about 8 o'clock this morning, the goats got away from me. I left the gate open for just ONE second while I slipped out to grab the hose, and they stampeded out. Usually, they stick together pretty tightly, but they must have made themselves a plan, because this time they scattered to the four winds.
I'm not fully awake when I head out to the animals in the morning. I ran after first one, then another, and couldn't catch any of them. I looked around for my goat-whapper (a three foot, slender stick of bamboo) but I didn't see it anywhere. I shouted and cursed and yelled for help. I managed to get one and drag her back to the gate, and shove her through with much grunting and puffing, but one at a time was the best I could do.
We are in the middle of a heat spell here, and even at 8 a.m., it's already hot and muggy. I had already milked three goats in the mama barn, which is a good fifteen degrees hotter than the open air, and I was tired from holding the goat's back foot with one hand and milking with the other so they didn't knock the bucket over (I have to figure out some sort of hind-foot restraint system, or I swear I'm going to maim a goat pretty soon.). After chasing down and hauling five goats across the landscape, sweat was pouring off me in rivers, which is not how I like to spend the first half hour of any given day. The last goat, Django, was far, far away. I was about to shout "Calgon, take me away!" when I remembered Ivory.
Ivory is the beautiful dog in the above picture. She's our good dog, as opposed the Lancelot, our bad dog. Homero has been "teaching" Ivory to "herd goats" which as far as I could see meant encouraging her to chase them all over hell and gone. I didn't like it at all, thinking it would just lead to nervous goats and possibly on to chicken killing. "Stop that silliness," I have said several times.
Well I'm glad he ignored me. I called for Ivory and pointed to the goat. "Bushka, bushka," I told her, which is sort of Spanish for "go get it!" She surprised the hell out of me by charging straight for the goat and bringing it right to the gate. Well, okay, I did have to repeat "bushka" a few times when the goat went in the wrong direction, but she had the goat at the gate in under a minute. And, just as important, she stopped instantly when I said "Wait." She didn't let the goat get by her, and she didn't bite it (I almost did, though).
What a dog! I'm going to take her with me every time I let the goats out for a browse. Maybe she can really be a major help to me. But still, I'm not going to let go of my goat-whapping stick.

NICE! Some dogs are natural herders. Ivory is a scary dog, but a good one.

(Scary to people she doesn't know. She's a protective dog.)

Not sure if this is helpful, but I tie two dog leashes to the back of my milking stand and create a loop with the handle loop end of the leash. This I put around the lower legs of uncooperative goats to keep them from kicking while I milk them. It tightens a little around the leg but not so much to cause problems. You do have to figure out the right length to tie to the stand so they cannot kick forward to the milking bucket. Occasionally one will slip a leg out and still kick the bucket (like two days ago) but usually it works like a champ. Let me know if my description is unclear and I can try to send you photos to explain it better.

Donna, good idea! I already use a dog leash on the barn door to keep my goat Iris from undoing the latch. I'll try and figure out what exactly you are doing... if I have trouble, I'll ask for pics. Thanks!