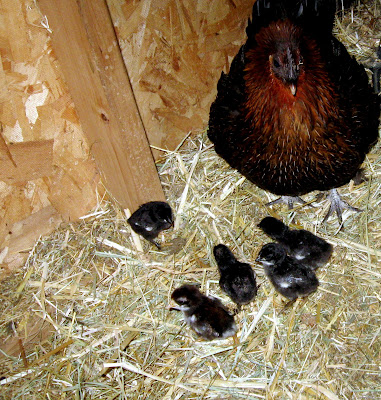 I know there are plenty of people who raise chickens out there. Do your chicks suffer the terrible infant mortality rate that mine do? The first hen who tried to raise chicks this year lost all five of hers over a period of a month or so. It was so sad, they each met a different grisly end, or just disappeared one by one until finally there were none. The poor mama hen ran around looking for them for a few days.... thankfully, the brain of a chicken is probably not up to the task of long term memory, nor is she likely capable of anything we might call grief.

When the next hen hatched out three chicks, I determined to keep them in the mama barn until they were well and truly ready to leave. I think it was more than six weeks. They were pretty well half grown by the time I let them out. Even so, one has disappeared, about two weeks after making its barnyard debut. The other two are old enough that they no longer stick with their mother, although they do stick with each other pretty well.
This newest batch of chicks numbered five. How old are they? Three days? One's gone. It somehow got left in the nestbox and apparently couldn't get out when mama and the other four left it. When I went out to milk this morning, I noticed that mama only had four chicks. I looked for the fifth, and found it alone in the nestbox. At first I thought it was dead, but it wasn't, just extremely cold. After I held it cupped in my hands and breathed on it for a few minutes, it seemed to revive a little bit, so I put it back under mama hen (who tried to attack it). Maybe.....
No. This afternoon, there were only four again. This time I couldn't find the little body. I will, I'm sure, when I'm least expecting to. I'm just not sure what more I can do to try and protect the baby chicks and give them the best chance at survival. They are alone with their mama hen in a closed barn; no other chickens or other animals can get at them. They have special baby chick food and water in a tiny waterer made for chicks (which I bought after a chick drowned in a regular waterer). Mama hen seems fairly competent. Yet I've lost seven out of thirteen born this year. Is this just the natural death rate for chickens? Good lord.
Maybe I ought to let all the broody hens have a crack at raising chicks. If I have seven or eight hens trying, maybe a decent number of babies will survive.

What about snakes?? THey can get in where mice can. I have seen fairly big black snakes squeeze thru and chickens cant see real well in the dark so a snake could get a baby real easy. That would make them disappear.

That's a good thought, but as far as I know the only snakes around here are garter snakes, and they only get about a foot long, max. Maybe a foot and a half. I doubt they are eating the chicks.

oh man, I HATE stumbling across dead critters. Farm life certainly teaches one all about the balance between life and death though. Although I was amazed that in Cuba, the chickens run around free, and all the hens seem to have a healthy amount of chicks running around behind them....right near busy roads even.

I don't know what to suggest. We never did any home-brooding when I was growing up, nor have we begun since I've been back helping out. No barn cats around??

I do have a cat, but I never see him out by the chickens. He can't get in the barn, anyway. When they are really tiny, they seem to die by cold or by getting tangled up in something. When outside, I think it's hawks. There are dozens and dozens of hawks.

I was going to suggest that hawks could be a problem but read that you're aware of it. Rodents too can be a problem. They will eat the entire carcass and you wont see a single feather.
We hatch out our eggs in an electric incubator, we find the chicks are healthier this way. There is dust on the chook feathers and when they take their first breath, they inhale dust which will affect them when about half grown. (Mareks disease) The only problem with the incubator method is that they need artificial heat for the first 6 weeks or so.
Dont give up, there are many things to try.