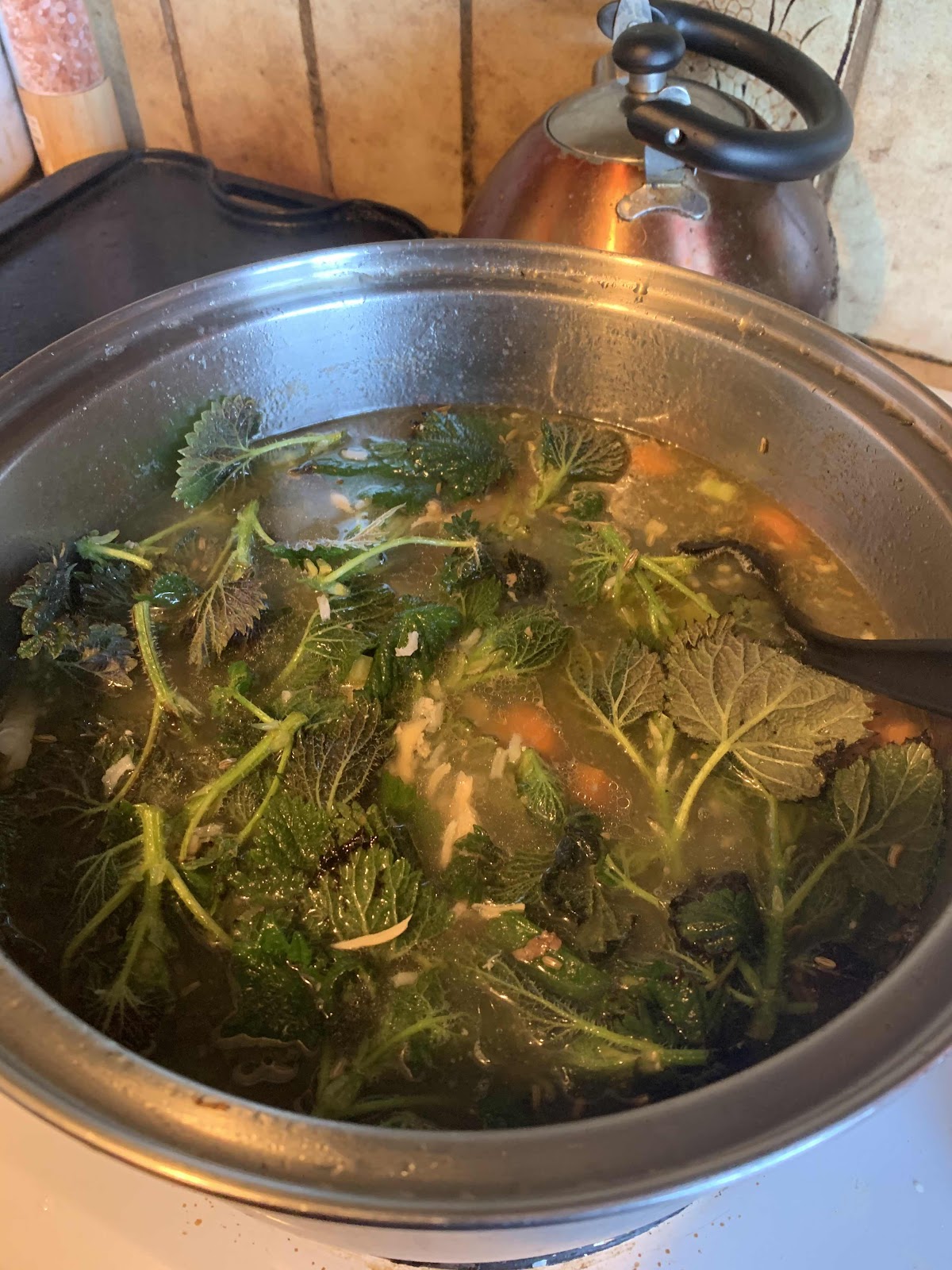 Stayed at home today - as we are all supposed to do - and having not much to do, decided to harvest some nettles and make avgolemeno soup with the remains of the chicken I roasted yesterday.
Note to self: nitrile gloves are not proof against nettle stings. Right now, six hours later, three fingers on my left hand are still bitching and complaining. Nonetheless, I did manage to harvest half a brown paper shopping bag full of nettle tips.
Avgolemeno soup is one of my favorite things, and I only make it once a year, just about now, when the nettles are ready. Avgolemeno means “egg and lemon.” It’s Greek. It refers to a delicious, tangy sauce that can be poured over vegetables, or used to thicken and bind broth.
SPRING AVGOLEMENO SOUP:
take one chicken - or the remains of a roast chicken you ate  the night before - and simmer in plenty of water with salt to make broth. Let cool, and remove bones, reserving flesh.
To the broth, add two stalks chopped celery, two chopped carrots, a teaspoon fennel seed, a tablespoon salt, a couple
Cloves garlic, and a cup of white rice. Simmer gently.
While soup is simmering, go gather your nettles. Use gloves (not nitrile!). Rinse nettles in a colander to clean and remove any grass or extraneous vegetable matter. Add nettles to broth.
When veggies are tender, make avgolemeno sauce:
Crack three eggs into a bowl. Squeeze three large lemons and add juice to eggs. Beat well, until smooth. Then use a ladle to slowly add a cup of hot broth to egg mixture, beating all the while. This is called “tempering” the eggs. If you were to add the egg mixture directly to the soup, you’d have scrambled egg soup and it would be gross. Tempering the eggs with the lemon makeS a smooth, beautiful yellow tangy sauce which you can then add in a thin stream to the soup, stirring at the same time.
Hit the soup with a teaspoon or so of fresh ground black pepper, maybe a bit of cayenne, and serve with crusty bread.
Other lovely additions to chicken avgolemeno soup might be asparagus, spinach or other tender greens, or cubed cooked potatoes.