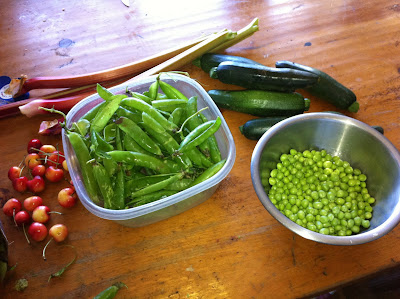 Our best trade partner from years past, Veggie/Oil Man, had seemingly dropped off the face of the earth this year. He stopped going to the farmer's market, and when I tried to call him, his phone was disconnected. Finally I decided to simply throw a couple dozen eggs and a half a pound of cheese in the car and go out to his place and see if I could figure out what was going on.
Luckily, he was home. He's going through some major transitions, and that's why he hasn't been around. However he still has lots of organic produce and he still wants to trade. Yesterday I came home with everything you see above: rhubarb, zucchinis, cherries, and a giant box of english shelling peas - my favorite. It took two hours to shell all the peas, but I put three pounds of shelled peas in the freezer and made a lovely pea and zucchini risotto for dinner as well.
Also look what I found: 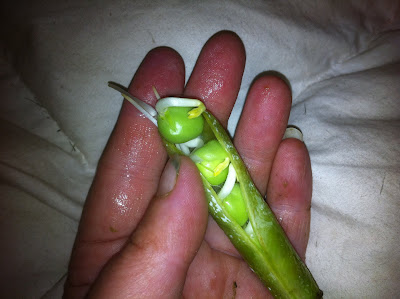 Isn't that weird? I thought peas had to be dried before they would sprout. Or at least be released from the pod! Several of the pods had sprouted peas inside.
Today the girls and are going back over to Veggie/Oil Man's house to pick sugar snap peas. Mine didn't do well at all this year, and I haven't been able to get any at the local farmer's markets. They are always sold out before I get there. V/O Man told us to come pick as many as we like for 75 cents a pound, which is pretty awesome. Later on today I will most likely be canning hot peas!

Mmmm, the risotto sounds good!
I hope your trade partner will be okay.....it sounds serious. It's a good thing you're keeping up with him!

Peas are my favourite too Aimee, I think peas sprout in the pod if they have had an excess of water.
Love the look of those cherries too. I like the "white" cherries best, they have a nicer flavour.

So glad I found your blog! We too are making the move to the country - from Houston. It will be interesting. You have several topics here that I am very interested in reading, so I'll be coming back as a repeat visitor! Have a great weekend!

Thanks Lana! Explore the sidebar for topics of interest, but I can't promise to be very instructional, except in a "don't do what I did" kind of way. Good luck with your move!