Neighbors And Hay (Stacking: Not as Simple as You Thought) 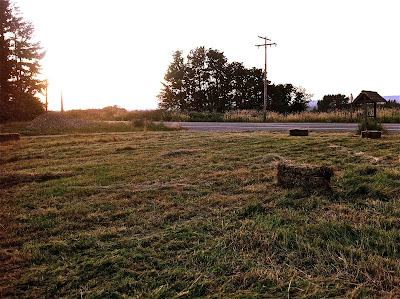 It's high hay season. Hay season is somewhat late this year due to unseasonable cold and rain in June. Good weather in mid July set everyone to haying, and we laid in the year's supply and enjoyed the beautiful sights and smells of hay season (Poor Man's Hay Elevator, Hay Season Again).

In the world we live in today it's so nice to hear neighbors helping each other. I can see God smiling. I sure He thinks...There are still good people on earth. I sure God will bless him and his wife. Glad you got your hay baled, I know how hard it is to get a small amount of land baled.

We use round bales now, but sometimes we use sq. bales. I never knew they were suppose to be stacked cut end up. Good to know.

Who would have thought that there was more to stacking bales than making sure they were on top of each other!

Finding a way to get hay baled when you haven't got the equipment is definitely not easy. I know this from first-hand experience, unfortunately, lol.

I'm glad your nice neighbor came in and saved the day (and hay!) I grew up on a farm and never knew the bales were supposed to be stacked cut end up...hmmmm...learn something new every day!

I found your blog through 'Farm Life Lessons' blog, had a lot of fun reading your posts.

Little constant tokens of gratitude are so nice...even left on the doorstep for them to find as a surprise. Their thoughtfulness is so much about what it means to be a good neighbor.

Finding ways to be of assistance to each other is always a key to being a good neighbor. My neighbors and I always give little gifts to each other and it means so much.

What a beautiful story!

Wait, so, Hay is is just whatever's growing, bundled up? I though alfalfa was a thing....

Hey its really great you have very beautifully described the Haying Equipment and the pictures you have given are mind-blowing..........

At El Rincon del Pulpo Galega one can enjoy some Asturian cider which is also common in Galicia. counseling and community recovery disaster management. The Dotcom had just burst and many were still On a clear day you get a fantastic view of the Pacific Ocean and Lake Hodges.