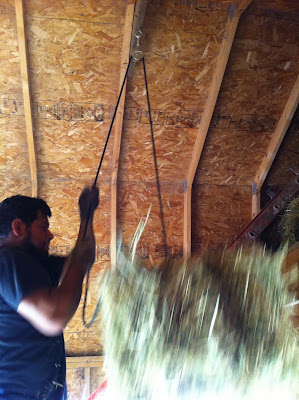 I am so annoyed with blogger. If I didn't have three full years invested here, I would probably quit. It won't let me upload a video, which it used to do. I can't create links anymore; photos show up only as strings of text. Anyway. In lieu of a video, here is a photo of Homero using our new pulley system to get hay into the hayloft.


Our hayloft isn't very high off the ground - about 9 feet - nor very big - it only holds about thirty bales of hay - but it's still very hard to get the hay up there. In the past, Homero just threw the hay up there, but his back isn't quite what it used to be, and these particular bales are very heavy. So we needed a new option. This is what we came up with. Still pretty hard work (look at the sweat rolling down Homero's face) but at least possible.

Now we have hay for the winter. In addition to the thirty bales in the loft, there are seventy bales in the mama barn. In order to get that many in there we had to remove everything else, including the milking stand. So now I am milking in the open air, but I don't mind. It's actually nicer - the mama barn gets extremely hot in the summertime.

Awesome! Hey, hang in there honey - I've been experiencing blogger issues too! Thought the issues were just me, but looks like we're in this club together! I'm thinking it's just about my time to switch over to WordPress before I put in too many more posts. Keep writing, you're very good and I enjoy reading about your life! :) Yvonne

i dunno about photos, but just manually enter the links.

fucking blogger won't let me just enter text to explain the html so i apologize for the convoluted nature of this:

does that make sense? it's super easy.

Good thinking 99...on the hay lift that is.
The other day blogger told me it couldn't find my page, told me to re write my title, but they don't know that they are telling an old granny to do something she doesn't know how to. Anyway they must have realised and the very next day it was all Ok

Mom and others - There are two tabs whilst editing a post. One says "edit HTML." You want to be on the other one. That way you can do everything normally. If you choose edit HTML, it shows everything, including photos, in computer language.