Swap Meet Preparations (Where Does It All Come From?) 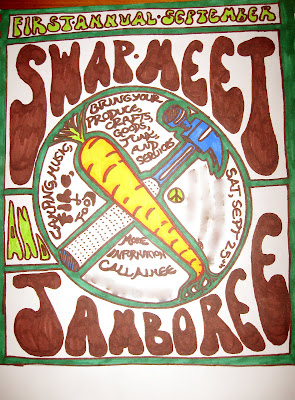 I'm planning a big party. I'm not really a party person - I like parties, and I'll go to one just about any chance I get, but I'm not so great at throwing parties. Some people - like my friend Sarah for example - just have a gift. Sarah's Easter Luaus and Christmas Cookie Parties are known far and wide and fondly regarded among her entire wide circle of friends. I envy such people.

I wouldn't say I have never thrown a good party: there have certainly been a few (I'm thinking of the adults-only pinata here). Truthfully, however, I'm never going to rival Martha Stewart, Sarah, or my own Mom as a hostess. The last party I threw was a housewarming when we moved in four years ago. It wasn't a bad party - we ordered a ton of tamales and built a big fire. I think folks had fun.
But four years is a long time, and I decided it was time for another party. Casting about for a theme - I think parties should have a theme - I came up with the idea for a swap meet. My trade network sort of fell apart this year, and I thought maybe I could kill a few birds at once by combining a late-summer full moon festival with a trade-fair (Recent Trades and a Good Idea).
I commissioned Rowan to design the flyer (great, isn't it?) and posted it at my church and the local general store. I sent it out as a JPEG to my contact list, and slipped it into the mailboxes of my nearest neighbors.
Then I realized how much work I have to do to make this place presentable. Just for starters, we haven't made a dump run in at LEAST three months. Yesterday I was out with the goats, and we were close to the compost pile. Looking at it, I suddenly realized, "this really isn't a compost pile... this is a TRASH pile." We have a tendency to use old yogurt containers and such like as "chicken buckets" in the kitchen, and then carry them out to the compost pile to dump. But the containers tend to stay there. Sometimes we use plastic bags for the same purpose, with similar results.
Looking around more carefully, I saw an incredible amount of crap that normally just slides under my field of vision. For example, that orange or blue plastic twine that comes with every bale of hay or straw - apparently not one piece of it has ever left the property. It's everywhere. Twisted up electric wire that is no longer attached to the fences - short lengths of fencing left over from previous projects - a broken up plastic tote and a couple of cracked buckets - a pile of tires - lots of odd pieces of lumber and irregular pieces of plywood in various stages of decomposition.
Clothing that has been left out through nine separate rainstorms until it is melded to the ground. Shoes that have been run over by the mower. Blocks of concrete and weird twisted hunks of unrecognizable metal that were turned up by the rototiller. Beer bottles. In the backyard, there are several trash bags full of the sodden remains of a futon that got left outside for too long. Over the front rail of the porch hangs an area rug that was long ago abandoned to the mildew. Just gathering up all the trash on the land and disposing of it would be a full day's work.
Then there are the weeds. Now, sure, everybody's got weeds. You probably think someone who worries about weeds just because they are throwing a party must be some sort of anal-compulsive. In most cases you would be right. But me, I have weeds that are taller than my entire house. You can barely SEE my house from the road for all the weeds. At an outdoor party in late summer, you might expect to find such activities as frisbee on the lawn, right? Well not here, because the thistles are burly enough to stab a child right through his shoes and into his foot. We'd need a nurse on hand to administer tetanus shots.
I can mow the weeds down to a polite height, but first Homero has to fix the mower again.
My sister asked me what I had planned for musical entertainment. "What entertainment?" I said, goggle-eyed. "Well," she replied, "Your poster says 'Jamboree.' You can't call it a Jamboree if you don't have any music planned."
I don't know what I was thinking - I figured if it's a campout with a bonfire, people are going to bring guitars and drums. Right? Don't they?
Speaking of bonfires, I have to procure enough wood for a couple. Then I better plan on having enough food to cook over said bonfires, just in case people forget not only their banjos and tambourines but also their chicken wings and potato salad. I'll need a good supply of beer and more than a few bottles of wine. Maybe some moonshine and stump-liquor.
In case it rains I'll need an awning or two.
Aargh. This is where I start to think, "oh what the hell. Most likely nobody will come anyway."
This is why I am not a great hostess. I'm kind of like - Hey, people! Want to have a party? Come on over! Fire! Beer! Food!
Really, what more does anyone need? Fire! Beer! Food!

This is me as a hostess too. I basically say "I'll supply the house/land, you guys figure it out."
I'm interested to see how my wedding turns out...

I have found that being anti-social is way easier than throwing parties. I only interact with the world if I really have to, and then I prefer it do it after dark, when everyone is in bed, in a place where no one knows me!

we hosted a big harvest party last year and like you I had to spend days getting the place ready for visitors. Funny how you don't notice the twine, the fallen limbs, the rest of the landscape until you have visitors coming.
At ours I asked a few of the people coming who i knew played the banjo or mandolin or guitar to bring them along. Also, we got in touch with a local organic winery who donated a bunch of wine, and a bunch of muscadine juice for the kids. Someone brought pressed cider, we had a large pig that was roasted, and everyone was asked to bring a side dish grown on their land or made with local ingredients..
Just some ideas to get your wheels turning. We too swapped goodies-had a swap table with soaps and eats, mostly.

Amy - how adorable your cavies are! I wanted one as a kid but my mom is allergic. Maybe they would make a good pet for my little girls.

Polly - sounds fantastic! I don't have facilities to roast a pig, but I was thinking of doing the old third-world stewed goat-in-a-garbage-can trick. But maybe not - I don't think many Mexicans are coming, and Americans are kind of put off my food cooked in a trash can ... even when the trash can is brand new! Sheesh!

I'm another anti-hostess Hostess but everything goes well anyway...not "as planned" because there is never a plan:)
One thing I have been told about by both Greek and Maori friends is that large animals can be roasted underground. That might be an option to look into?