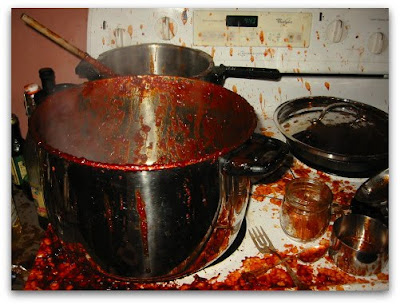 Please note: the above picture is not a picture of my kitchen. I'm not saying my kitchen has never looked like that: I'm just saying it doesn't look like that right now. The above picture is one I pulled off the internet to illustrate the process of making ketchup, which is what I am doing right now. MY kitchen is spotless and I am wearing pearls, heels, and a clean apron and singing a little ditty as I waltz about with a wooden spoon. There's a bluebird over my head right now, in fact, and a fuzzy-wuzzy little rabbit gallivanting around my feet. I'd post a picture, but the dwarves took the camera with them to diamond mine.

I got a good deal on a twenty pound box of roma tomatoes. I've made homemade ketchup before and in my opinion it kicks Heinz all to heck. My children are not so sure, but that's only because they are dinky little twits with immature little tastebuds. They also think boxed cake mix is superior to my homemade pear pie and that cafeteria lunches are better than homemade. You try and you try as a parent, but you can't compete with Madison avenue. Or even with the other six-year old idiots at elementary school.
Anyhoo. My twenty pounds of tomatoes looks like it's going to make about ten cups of ketchup. I'm canning it in jelly jars. I was all out of empty jelly jars, so I raided the pantry. There were a dozen full jelly jars in there - full of three year old ginger-rhubarb sauce. Here's a little piece of advice for you, absolutely free of charge: Never can rhubarb. It's a total waste of time and effort. Nobody will ever ever eat it. You will find yourself three years later, agonizing over opening the jars and pouring the sauce down the sink. On the one hand - it was the first stuff you ever canned as an adult, ever! On the other hand, what the bloody blue hell are you gonna do with it?
I tipped it down the sink. I KNOW what to do with ketchup.
Actually, this ketchup is earmarked for the swap meet (Swap Meet Preparations (Where Does It All Come From?)). I've been trying to produce and gather together enough stuff to trade at the swap meet. So far I have -
- about twelve pounds of assorted cheese. I am still making cheese as fast as I can. Today, I am making a batch of Smokin' Goat Chilpotle Cheddar.
- ten quarts pear sauce, some with blackberry and some without
- nine garbage bags full of raw alpaca fleece (that's another story)
- and soon, ten cups of lovely, delicious ketchup. Speaking of which, I have to go stir.

The Chipotle Cheddar stopped me right there - wow! sounds great!

I've never had homemade ketchup but I'm sure, like everything else, homemade tastes better :)

Yum Yum and Yum! You make me want to make cheese. Oh, then I'd have to milk a... sheep. I'm not having goats, I've always said. You gotta draw the line somewhere.
Once again, your writing cracked me up. Thanks for the good humor.

you are way too funny.
The ketchup sounds far superior to rhubarb sauce, even to canning fool me.

Hey Chicke, I would like you to check out my blog later today. Smooches,
SURPISINGLY, I think we have the same stove. LOL

I added myself to follow your blog. You are more than welcome to visit mine and become a follower if you want to.