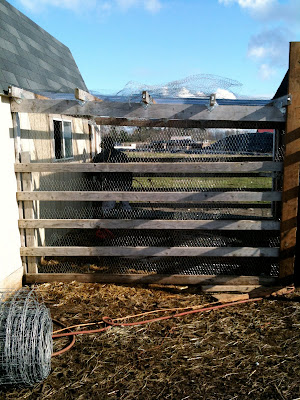 Today, Homero built the coop. We used the spot between the two barns that used to be the alpaca catch-pen, back when we still had alpacas. This space has the advantage of already being fenced and roofed - all he had to do was cut a man-sized door in the fence and wrap the whole enclosure in chicken wire. 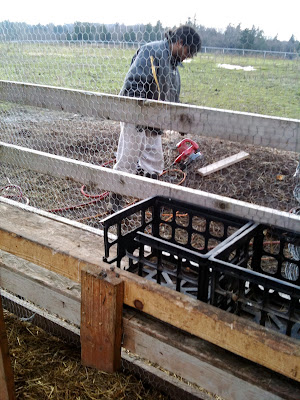 Here he has built a small shelf out of scrap wood and placed all the nest boxes on it. The chickens are used to roosting in the nest boxes because we don't have any good roosts for them in the barn - which means that the eggs are often poopy and gross. We hope we have solved this problem by building some roosts. The coolest roost is visible behind Homero: a length of broken ladder, set up to lie flat and the rungs provide the roosts. Also, a twelve foot dowel, also scavenged from something else. 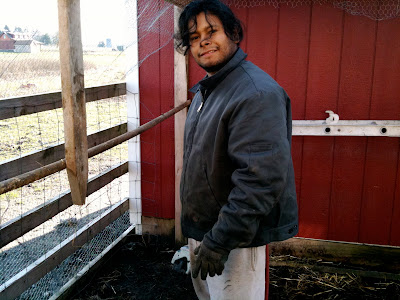 I have often castigated Homero for the gigantic pile of scrapwood he has behind his shop. And I do mean gigantic: it is perhaps four feet high by four feet wide by thirty feet long. It's dangerous - nails stick out willy-nilly - and ugly and provides an ideal home for rats and snakes and God knows what else. Plus, when combined with the twelve or fourteen cars on the place in various states of disrepair, it makes us look like .... well, like Mexicans.
I know - I know. But sometimes the truth hurts, y'all.
However, today the scrap pile came in very handy. We have a new chicken coop and we didn't buy anything but a roll of chicken wire.

Aimee, every thing looks great except for the roosts. Hope you dont mind but I must point out....chooks feet are deigned NOT to grab onto a round perch, they are "flat-footed" creatures and therefore prefer, and are more comfortable on a piece of 3X2 plank. the widest part flat so they can walk along it if necessary.

Olive I did not know that! Well it will be fairly easy to add a plank or two. Thanks for the information.

I love Piles of scrap lumber.. Ours do not lay around long.. I always find something to do with it!Lol

Great Job! Totally cool to reuse lumber. We also have a pile of scrap lumber behind my husbands work garage. Just last month he built a platform for the goats with scrap lumber. My chickens have flat roost and round and they use the round ones most. I am adding another roost in my coop and it will be flat because that is all I have in the lumber pile. I love that you used the old ladder. Recycle & Reuse, Great job on being green.

I don't want to come here picking fights but I have to argue a bit with the comment about a chicken's foot and what it is designed to perch upon. While a chicken certainly enjoys moving about and feeding on a flat surface like the ground, they are still naturally drawn to perching in trees at night or for safety. Too many predators can move more easily on a flat surface than a round one, so the prey instincts are stronger on the flat.

The problem with using round roosts nowadays, as I see it, is that many breeds are oriented to having a deep keel bone to carry a lot of breast meat. Apparently this means that settling down on a round roost can cause discomfort and deformation of the keel but I suspect the issue is more with meat birds and whether they can get on a roost or not, and then whether they are too front heavy to hold on properly.

I find that their preference is a round perch that is not too small...something they can grip with not too much curl of the foot and still rest upon comfortably. Our ladies seem very happy upon their sapling trunk perches and none try to spend the night in nests.

On another note: I wanted to ask why you don't have alpacas anymore?

I should have added that the dowels likely are too small to be good roosts...

thanks for the input, Jerry. The dowel is an inch and half diameter, so I hope it's wide enough... they have been roosting on the ladder already so I think that will be okay. Also, they are mostly banties, not meat birds. Like i said before I can always put a plank in there too.

We got rid of the alpacas because it was an extremely dry summer last summer and we flat ran out of grass. I did some more reading into realistic animal/land ratios and discovered I had just gone overboard and had more animals than the place could support.

It was a choice between the ponies and the alpacas. I would like a fiber animal - maybe another goat, an angora.

I would think an alpaca or two would be perfect for such a situation though. Considering where they originate, and being camelids, I understand that their food and water requirements are far lower than most other animals. That is what has me looking at them, in addition to theirs being the only wool that I can stand.

"Jerry you are right about that. One alpaca eats about a hALf flake of hay a day and they are very easy to care for too. They don't have many parasites. I like them but our county has rules about how many animals per acre and they were the low men onthe totem pole.

People look at me funny tho, when I wonder aloud about how they might taste.

So very nice, I love a chicken coop made from scraps & it looks good too, good job Homero.

we have the same seasonal thing with the chickens....either fence in the garden or the chickens. now i've got more chickens, i'll be needing 2 tractors. one of them is going to be a n old trampoline frame.