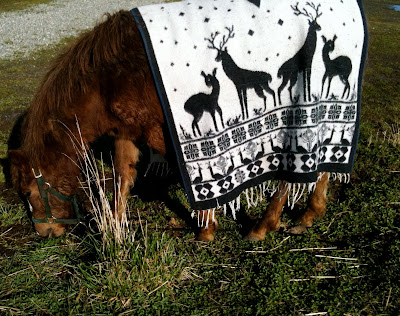 I am the first to admit, I know very little about training horses. Okay, virtually nothing. But according to the advice I've been given by my farrier and by various other horsey-type people, until a horse is two years old or so, training consists mostly of introducing them to all sorts of stimuli so they are not spooky, and of getting them habituated to being touched all over, groomed, et cetera. And of course learning to walk on a lead and to load in a tailer, and that sort of thing.

Since Poppy will be a riding pony, I decided it was time to get her used to having stuff on her back. She is such a sweet, even tempered pony, it only took her about two minutes for her to decide that this blanket wasn't going to hurt her. She grazed peacefully while I put it on and took it off, waved it around, and generally did everything I could think of. 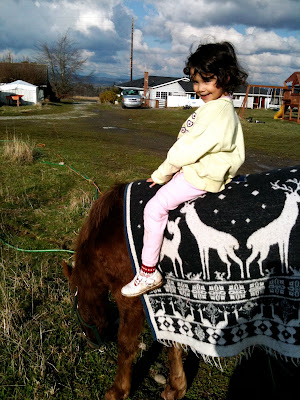 Then I put Paloma on her back. She really didn't seem to care at all, or even notice. However, Paloma is not such a great balancer, so I took her down after only a minute or so.
I love ponies.

Cute! Your daughter is beautiful! Good job on traing the pony. Very good to not have the pony be a bit skiddish about the blanket let alone Paloma.