Mama Barn Mice, and an Ode to my Husband

My husband is a brave man. He possesses an enviable equanimity. He is not one to dwell on frightening possibilities - in fact, he's rather fatalistic in a very Mexican way. He is as unmoved by the thought of death as anyone I've ever met. He certainly isn't afraid of pain or hardship.
In his life, he has confronted danger and privation such as very few of us comfortable Americans have known. He has experienced thirst, hunger, and terrible uncertainty. He has been within a hairsbreadth of death by exposure, and lived many years as a hunted man, and yet maintained his sense of humor, his trust in God, and his joie de vivre. Offhand, I can't think of a single person I admire as much, nor anyone I'd rather have at my side should things ever go horribly, horribly wrong.
Yet, my husband is afraid of a couple of things. One of them is snakes. To be fair, he does come from a part of the world which abounds in poisonous snakes. However, I have not yet been able to convince him that garter snakes are harmless and that the the little girls should be allowed to play with them.
Also, he is afraid of mice. 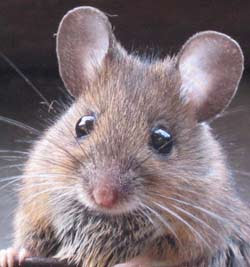 Today, we were in the mama barn cleaning beehive frames (something it feels like we've been doing forever), when suddenly a couple of field mice crawled up out of one of the boxes. Homero startled, backed up, and dropped his hive tool. "Get it!" he said. "Get it out of here!"
The first one I easily grabbed by the tail and threw out of the barn, but the second and third were too fast for me and escaped into the stack of hive boxes. I spent a few minutes trying to catch them; moving box by box and scrambling around in the hay, but I couldn't get either of them. Homero, pale and a little shaky, said "I'm going to get the cat," and hightailed it for the house.
I kept working for a few more minutes, then decided to go see what was going on. My dear husband was in the kitchen washing dishes. "I couldn't find the cat," he said. "When you see him, lock him in the barn for a few days, okay?"

Yep! I'm with him on that score.

Thats great!! But I agree I would lock the cat in for a few days.. Where you see one there is usually 10!!

Love that story. We all have our phobias, and our limits.

If that's all it takes to get him to do dishes, I would tell him the barn is full of them and maybe he would clean the whole house.lol

Loved the story! My big, burley, manly man is afraid of snakes and spiders. LOL

So, no Minever mouse and the Plinkety Plink for Homero then?

What would that be in Spanish anyway?

What a great post - it's amazing how we all have our idiosyncrasies that can be a surprise to others. Personally, I love mice, and I hate to have to put out traps for them. If I can catch one in the barn, I put it in a bucket and give it food and water before I release it, and I watch it for a while. To me, they are like tiny little pets. Yeah, I'm crazy. But then, so is Homero! Hee hee!