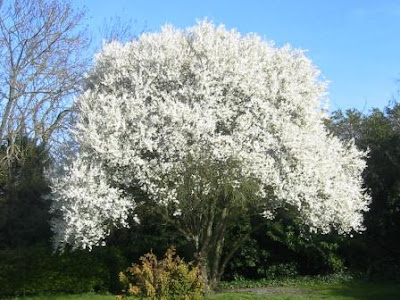 I've planted a fair number of trees in my life so far. I planted one today. I decided I'd like to try to remember all of them and make a list.
As an American born in the last quarter of the 20th century, I am well aware that I could not possibly offset my carbon output, no matter how many trees I planted. Most likely, I could have spent my entire life from birth planting a tree per minute and still not come close to matching my consumption. So let's just not go there, okay?
I just like trees. Long before climate change was ever on my radar - say, 1981, when I was nine years old, to pick an arbitrary date - I was into planting trees. My mom, God bless her, always insisted on live Christmas trees, so we planted at least one tree a year as far back as I can remember. During the years that I lived in the city, I refused to have a Christmas tree at all, since I didn't have a place to plant a live one. Instead, we made gingerbread houses or painted christmas trees on butcher paper and taped them up on the wall (Now I know that there are Parks Department programs that will plant your live, donated tree in a park).
Nearly the very first thing that happened when I bought my first house, on a medium sized city lot, is that my Mom gave me a gift of two apple trees to plant in the back yard ( that makes 2). Those trees are alive and well, though sorely in need of pruning, and putting out large amounts of apples year after year. 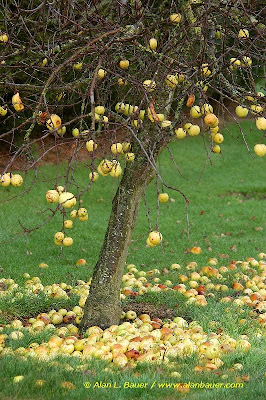 I lived in that house for fifteen years, and during that time I planted (in addition to the apples) a cherry tree, a plum tree, and a pear tree. All of those trees are alive and bearing. The cherry (a Bing) gives an immense and delicious harvest of about fifty pounds a year. Man, I miss that tree (total of 5). 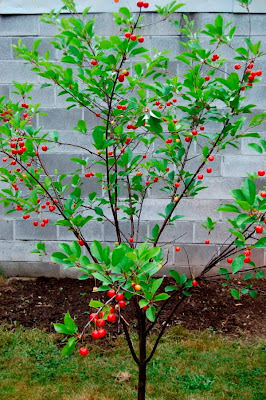 When we bought the Ham road property, again, the first thing we did is plant fruit trees. I was just out there the other day, and alas, two out of three fruit trees have died, but one of the cherries is still alive (six). Also, we planted a Christmas tree there two years ago. I can't remember what kind of tree it is, but I know it's some kind of fir native to the area. It's alive (seven).
This property that we live on now is - as I think I have mentioned - seriously lacking in trees. We planted a small orchard as soon as we could. Alas, the goats killed many of the trees, but the survivors include an apple, two cherries, a plum, three pears, and a big hazelnut bush which I am counting as a tree (fourteen). 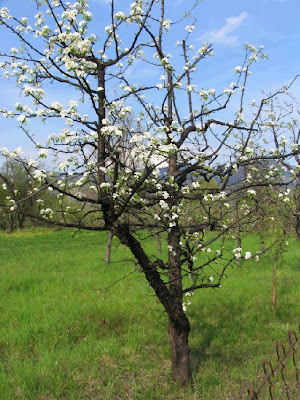 Today I planted this past year's Christmas tree - a Korean fir (fifteen).

I can't count them yet, because I haven't planted them and I don't know how many might survive, but there are six fruit trees coming in the mail which I will plant this spring. God willing they all live and that will make twenty.
Yahoo!
Note: these images were gathered from the web: none of them is an actual picture of my own actual trees.

Aimee - Wonderful! Everyone needs to plant a tree - or a dozen - in their lifetime. I am very proud of my 12 fruit trees in a city lot. I knew that couldn't be a photo of your apple tree with all the apples fallen on the ground! I knew you'd be making sauce or juice or something out of them. I fell in love with making juice last year, with my first serious grape and apple harvest.

I have enjoyed reading your blog. We seem to plant a few trees everywhere we go too.

Can I count my forsythia and 7 azealias?

thank you berryvine!
bro, I think you can count anything you can reasonably expect to outlive you. Azaelas count, but I don't know about forsythia.

who are you trying to kid? You were born in the last 1/3 of the century. :-)
also, I have about 75 evergreen saplings that you are welcome to, mostly cedar but also firs and I think a pine or two, and some hemlock. I will even help you. They range from about 18" to 5' tall, you could easily spend a day planting and have the whole McMansion next door hidden in a few yrs. And triple your total tree planting count, for free!

Man I agree with you totally, as I think you have seen me write about before, but I am still woefully lacking. I have cleared out a LOT of deadfall tho, so that should count.

I do hope to get cracking this year or next tho. I am even trying to sprout 4 apple seeds now, just for fun.

Jerry, I'd love to know how thwe apple experiment turns out