KWe have acquired two new pigs. To get a pig or not to get a pig, in any given year, is one of the larger farm-related decisions we make. Pigs can be profitable, and of course they are delicious, but pigs are also expensive and destructive.

The price of weaned pigs has risen precipitously in the last several years - from about $75 to about $140. And with pig food running at $15 per 50# sack, that means that pigs are only profitable if we can generously supplement thier diet with free food - AKA the Gleaner's Pantry. (http://newtofarmlife.blogspot.com/2013/10/scavenge-city-gleaners-pantry.html?m=1)
The problem is, that in order to seriously supplement the diet of not one, but two pigs, we would have to go to the gleaner's twice a week. And that's a hell of a lot of work. Frankly, more work than I am prepared to do. Accordingly, I told my husband that we could get pigs if and only if he would sometimes take my place at gleaner's.
He reacted with poorly concealed horror. He squirmed and he hemmed and hawed. He looked at the floor.
"What's the problem?" I asked. "I've been doing it alone for three or four years now, and you know how much work it is. I'm tired."
"Well," he said, practically digging a hole In the floor with his toe, "there's only women there."
"What?" I was a little taken aback. "That's not true! There's always a guy
or two.... Usually..."
I'm surprised at myself that my first impulse was to deny the truth - yes, gleaner's is a women's organization and
fully 90% of the people there are of the female persuasion. Why was my instinctual response an attempt to soothe my husband's discomfort, rather than a challenge to the implicit assumption that he couldn't possibly be expected to be the only man in a room full of women, even for one hour?
Could it possibly be because I've been conditioned to believe that a man's psychological comfort is more important than my time, my effort, or my feelings? That part of my job as a woman and especially as a wife is to protect him from the need to ever confront his unconscious sexism?
Nah. Couldn't be.
So, without insisting on a discussion of the underlying gender dynamics, I simply said "well, I don't think I can commit to going to gleaner's that often. I guess we won't get any pigs. Even though - look!- these beautiful well-grown piglets are available at an extremely good price."
As I suspected, Homero's anticipatory hunger won out over his conditioned reluctance to do what had been branded in his mind as "women's work." He said he'd help me get food from gleaner's to feed the pigs. And so we went and bought these incredibly adorable and healthy, larger-than-usual pigs. 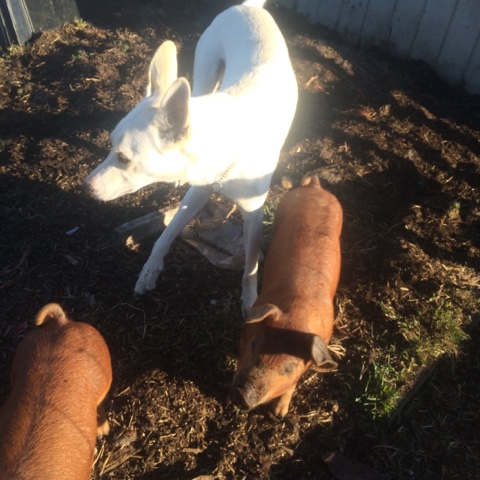 We've had the pigs for two weeks, however, which means six opportunities to go to gleaner's, and Homero has yet to go in my stead. So maybe the joke's on me.
It was hilarious to watch Haku interacting with the pigs. He clearly had no idea what they were - maybe puppies? He tried to play with them like puppies. He made a play bow, and the pigs looked at him and snuffled. Next he tried pawing them, which they didn't like.
Even a baby pig is fully capable of defending itself against your average dog. When Haku got too rough, the pigs charged him and bit. Haku snarled in retaliation, and then I stepped in to scold him.
"Gentle!" I said.
"Gentle" is probably the word Haku knows best, after "no." As soon as he heard me say "gentle," he stopped roughhousing and started quietly licking the pigs along the ribs.
The pigs, under this treatment, went into a trance and slowly toppled over on thier sides.  I love this about pigs. Scratch them gently, and they just roll over and lay there with silly smiles on their snouts, legs stiffly akimbo. 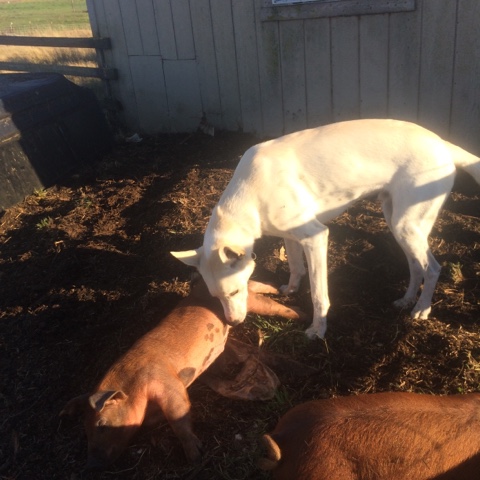 While I certainly agree that if Homero wants the pigs he has to be willing to contribute to what it takes to feed them, "women's work" or not, have you at least tried to confront your unconscious bias about how what it means for a man to step into a world that women have (deliberately or not) walled off for themselves?

It may not be sexism (or it may not be *only* sexism) but a recognition that in many spaces designed by and for women, men are not welcome. Treated with suspicion and hostility, and distrust. Just as women are in spaces (far too many) that men claim for themselves.

I'm of the opinion that SOMETIMES it's ok for men and women to have single-gender spaces. But those spaces should not be places of business or exclusive access to public goods. But places which are not EXPLICITLY gender-exclusive are often FUNCTIONALLY gender exclusive, and in this, women behave similarly to men - chilly receptions or jocular humiliations for the outsider.

Homero may be *willing* to go into those spaces, but recognize (and respect) that he is not welcome there.

The gleaner's pantry is not a hostile
Environment towards men. In fact we are uniformly delighted to have at least a few
Men present for the very simple
Reason that crates full of melons are heavy ;)

You and I have explored the question you ask quite thoroughly in other forums, so I don't feel the need to go into it again here. All I'll say is that it isn't my job to coddle or
Protect him (or any other man) from ha uncomfortable feelings. He's a grown up.