Preserving a Peck of Peppers 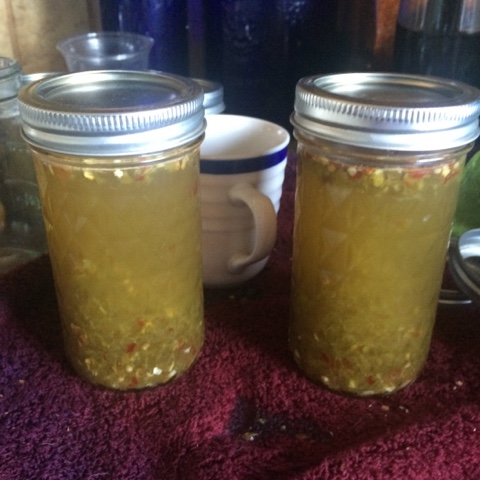 The harvest season is winding to a close. Of course it's only September, and a good deal of produce is yet to come
- winter squash, more apples, more
pears, mushrooms. The harvest won't be over for quite some time. What I mean is that MY preserving season is winding down.
I had a wonderful season this year; better, I think, than any in recent memory. I've been canning salsa in small batches all year - from Gleaner's produce - so I won't even count that. Real summer preserving this year involved making a ton of fermented pickles (the fridge is still full of jars); drying what felt like
hundreds of plums and pears; canning bread and butter pickles, dilly beans, pear sauce and applesauce; and even making wine and cider!
Yesterday I did what I think will probably be my last canning of the year (not counting gleaner's salsa). I had a couple pounds of beautiful small green hot peppers. I'm not sure of the variety because I bought them from a farm stand, but they looked like green cayennes. Since I still have plenty of home canned jalapeños in vinegar, I decided to use these ones for pepper jelly.
Not everybody likes pepper jelly - my husband for one thinks it is a bizarre substance, but I love it. Alas, I am just
not very good at making jelly. There are still six - count em six - pints of straw berry syrup in the cabinet that was supposed to be strawberry jam. I don't know what I'm doing wrong, but my jelly often, well, fails to gel.
This time it was sort of a half-success. It did gel, not very firmly but firm enough. It isn't syrup. And it tastes good. But I don't care for how it turned out aesthetically. It's kind of an ugly algae green color and most of the pepper bits sank to the bottom before it really gelled. It is still delicious on a cracker with chèvre, and I know we are capable of going through it, but I had hoped to send off little jars of pepper jelly as Christmas presents this year, and I don't think these are pretty enough.
Oh well - another harvest that is still going on is the Salmon harvest. I haven't smoked any salmon yet this year. Last year I sent everybody smoked salmon for Christmas, and I didn't hear any complaints.