The satisfactions of living off of one's own land are many and varied. It is, for example, delightful to invite my extended family over for Thanksgiving and feed them on turkey we raised ourselves and apple pie made from the apples on the trees of our own orchard.  It makes me happy and proud to throw a big birthday bash for Homero and give his Mexican friends the pleasure of an old-fashioned goat barbacoa such as they remember from their younger days back home in Jalisco or Oaxaca; the slaughter, butchery, and the digging of the pit oven included. These pleasures still lie in the future this year - imagining them is one of the distinct joys of this short ephemeral season.

This is my favorite time of year - after the heat of summer has dissipated and the leaves have turned and are falling, creating a crisp, fragrant carpet underfoot - but before the rains have turned everything into cold muck. The sky these past several days is a cool, cerulean blue, and the trees are ninety different shades of gold, orange, burgundy, and brown. I try to let the goats out every afternoon to forage on the dry leaves and blackberry vines, and on the fall-flushed grass before the first frost comes and kills the nutrition.

Today I enjoyed the unique pleasure of sitting out in the late afternoon sun on a warm October afternoon and drinking a glass of beautiful, pink, home-brew plum wine. I'd have to page back in this blog to find out when, exactly, I started this batch of plum wine. I don't want to do that - bathed as I am in the rosy glow of the same. Let's just posit that the wine was ready, today, for bottling. I decided to do it today not because of any learned examination of the wine itself, but because I had finally collected a sufficient number of large brown bottles. Corona beer puts out a "family" size that measures 36 ounces. There were eight of them lined up today, and I decided that the time was ripe. 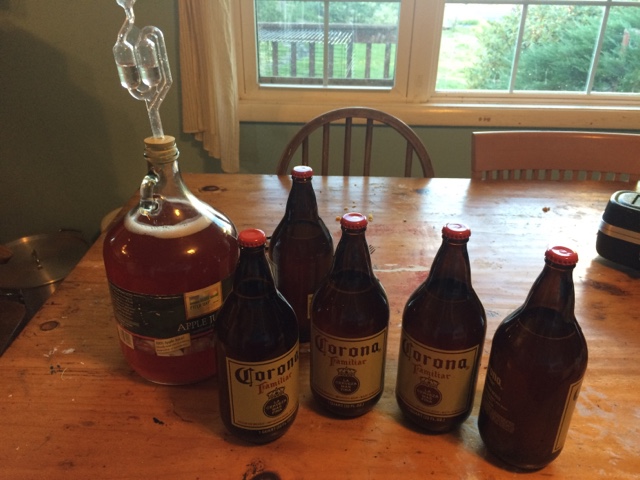 I have never made wine before - though I have made apple cider a few times. In fact, I made apple cider earlier this year. That's a funny story, and a lesson. We pressed apples on three separate occasions this year, which is three times more often than we usually do. Faced with many gallons of fresh juice, I decided to try making hard cider. I'm not the kind of person who cautiously measures and precisely calibrates anything. I'm more of a "wing it" kind of cook. I'm a good cook, I won't ever say I'm not, but I am much better at soup (such a forgiving medium) than I am at baking cakes.  When it comes to brewing, that means I am not going to be exactly certain of the strength of my creations.

A few weeks ago, I bottled this year's cider. I bottled it in these same 36 oz Corona bottles. My husband, seeing them lined up on the mantle, decided he was thirsty and didn't feel like going to the store. Accustomed as he was to downing one of these hefty bottles full of Corona, he did just that. But the bottle was full of home-brew cider. Hard cider that you buy in the store is usually more or less beer strength - 5 to 7%. I, however, used a champagne yeast, and my cider was at least twice as strong as beer. Maybe as much as three times. Had my husband consulted me, I would have told him to drink it like wine, not like beer. Alas, he did not.

I have never seen Homero so drunk. He was accidentally drunk, so it doesn't reflect on his character at all - but it was pretty funny nonetheless. Poor man could hardly speak, and hardly stand up. I had to put him to bed. My main regret was that he had downed  too much of the limited supply of cider.

Most of the plum wine was bottled today in the same size jugs. I simply capped them with bottle caps instead of using wine bottles and corks. My local brewer's supply store rents out a corking machine, but we don't drink enough wine to have bottles to use. I asked about using beer bottles and capping them like this, and was told that if we drank the wine within the year it shouldn't matter at all.

No problem there. I drank about one-tenth of it today. Such a beautiful afternoon and evening. I absolutely love days like this - crisp enough that other people complain of the cold, and I can feel superior and smug sitting out in my shirtsleeves. Especially on days like this, when I have completed all my housework and I can take a book outside with me to read without remorse or guilt. Well - only the delicious guilt of reading trashy fiction instead of anything "serious."

A canvas slingback chair, a cheap novel, a jug of new plum wine, and the sunset......

If I remember from my homebrewing days, no yeast can get you more than 19% alcohol. After that, the ethanol kills it off. Anything higher than that must be distilled.

You re a wine maker! I make plum, blackberry and quince wine, occasionally perry. Tom makes the hard cider.

I am a
Winemaker only in the strictly limited sense that I have now made wine - once! I would love to hear more about how make wine. Especially if like to hear about perry. We have four prolific pear trees, but you can't exactly press them like cider. They get mushy. How do you do it?