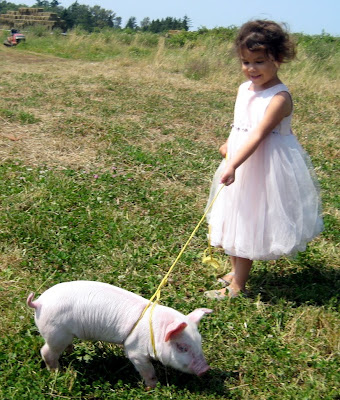 My camera is eternally on the fritz, out of batteries, or both, so I can't take a picture of the lovely ham in the oven, alas. I will, however, give you a recipe, since the smell permeating my entire house is so luscious that I believe it would actually be a sin not to. Meanwhile, here is my favorite pork-related photo - I call it The Princess and the Pig.
The ham in the oven is not a part of the above pig. That pig was consumed last year. This year, I decided to buy pork instead of a piglet. We have raised three pigs in the past, and all of them have provided us with delicious meat. But pigs, as I believe I may have mentioned, can be seriously obnoxious (Everybody Hates Pigs, and Confessions of Laziness), and also seriously destructive to my limited amount of pasture. We will almost certainly raise another pig in the future, but I'm taking a year off.
The ham in the oven was part of a half hog that I bought from the same farmer from whom we have always acquired our piglets. That's an interesting story, and paging back in the archives, I can't see that I've ever related it, so here you go:
My addiction to Craigslist is long-standing: it was firmly in place before we had acquired any animals at all or done the preliminary work (fencing, barn-construction) to do so. I just liked to peruse the farm and garden section - it was part of my fantasy life. You know, the fantasy in which I am a competent farmer and head-of-household; the fantasy in which I provide for my family's every need out of my own hard work and knowledge. The fantasy in which I have laid out the plans for a fully self-sufficient homestead. You know - utterly bogus dreamland.
Anyway. I'm perusing craigslist and I see a "wanted" ad for a cattle chute. As it so happens, there is a big old metal construction out in the back field which I think is a cattle chute - meaning, if somebody put a gun to my head and said "name this piece of equipment" cattle chute is what I would guess. So I write to the person who placed the ad and I say "I think I have a cattle chute. Don't know for sure and have no idea if it is complete, but it's yours if you want it." They came up here from Sedro-Woolley (40 miles) and decided yes indeed, it was a cattle chute and they did want it.
"What do you want for it?" they asked.
"Oh nothing," I said. "I'm not going to use it."
They briefly conferred in whispers and then asked me "well what about a piglet? We raise pigs."
"Umm," I said, thinking there's nothing I want less than a piglet, "I'll have to talk to my husband. For now, why don't you just take it?"
That was a big mistake. My husband fondly remembered his family raising pigs in Mexico and the delicious, nostalgic taste of farmstead pork. He insisted that we did, indeed, want a pig. He was so sold on the idea of a pig that he actually built a pigpen and a pig-house, so how could I say no? A pig we got.
When that pig was transformed into meat (death of a pig) I learned a lesson about the superiority of pasture raised pork, and decided I would never again eat supermarket pork ( a lesson that was reinforced by subsequent reading on the subject of factory farming). Two other pigs followed. But this year, I just didn't want to cope with the fact of a pig: the squealing, the mud, the wallows in the pasture. When I saw (on Craigslist, of course) that the same farmer from whom I buy my piglets was selling a hog by halves, I jumped on it.
The price is about the same - it's marginally cheaper to raise your own pork, but really not by much. The quality is the same, and I have seen their operation and know that their pigs are happy and healthy with room to exercise and freedom to root and breed. Frankly, I'm delighted to have avoided the bother of raising an organic, free-range pig while still enjoying the pleasure of eating one.
Spicy Raspberry Ham
One half-ham (I used butt end)
2 canned chilpotle peppers, with adobe sauce (about 2 tablespoons)
1/4 cup raspberry jam
2 tbspns honey
1 tbspn vinegar
1/2 tsp rosemary
3 cloves garlic
1 cup white wine
2 yellow onions, quartered
2 garnet yams, sliced into fat rounds
Place ham (thawed if frozen) into a large cast iron skillet.
Score deeply with a paring knife. Place next seven ingredients in blender and blend until smooth. Pour over ham and use hands to work into cuts. Turn ham several times. Around ham, place onion and yams. Bake at 325 about 2 hours, or until well done, basting frequently. Serve with rice and braised greens.

The raspberry ham sounds so delicious and so different from anything I have cooked. I think I might try it.

we do the same. Why bother ruining your pasture and dealing with pigs if you can buy them or trade them from one of your best farming friends?
I will most definitely try the recipe. Thanks.

We too have raised piglets for meat Aimee, Popeye had them trained so that if he opened their enclosure they would run around the paddock a couple of times, he would then whistle loudly and they would return and sit beside him...just like a puppy. LOL
I'm going to really miss this place...if we ever find a buyer.

That's amazing Olive! I knew they could be trained, but never knew anyone who actually did! Best of luck with your real estate adventures.