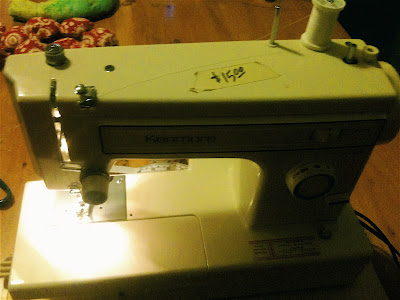 Some four years ago, I came across this sewing machine at a garage sale. Actually, it was the garage sale that the previous owners of the house my sister bought held when they moved out. As you can see by the tape across the top, it was a steal - $15. I had no idea how to sew, but I plugged it in and stepped on the pedal and the needle went up and down and I knew that was good. The lady of the house told me it was in perfect working order and she had the original owner's manual. I have always wanted to learn to sew, at least a little bit. I have no ambitions of becoming a costume designer or anything like that, but it would be nice to be able to knock out a few pillowcases or some curtains for the kitchen now and then. I bought the machine and took it to my new house and set it on the counter in the laundry room and there it remained for the next 48 months.

I may have mentioned (ahem) that Homero brought his mother, sister, and nieces home with him from Mexico last week. Temy, my sister-in-law and comadre, is an accomplished seamstress - at least by my standards. She once worked in a shirt factory in Philadelphia (actually from her stories about it it sounds like a sweatshop), and to this day she makes a lot of her own clothing and her children's clothing. She can turn out a dress you'd send your child to school in in less than two hours. It occurred to me that she might show me how to use my machine.
Of course she was delighted to. As I have said before, my Mexican relatives are the very best kind of relatives to have - I think the way I put it before was that they would "gnaw their own arms off and sell them on the black market just to be able to buy a chicken to cook for you when you show up unannounced at their house." Makes me feel like kind of a shitty hostess by way of comparison, but that's a post for another day.
Turns out, Temy is a very good teacher. I finally learned how to thread my machine, wind the bobbin, sew a straight seam, and untangle a snarl. Within just a few days, I have made several things - close relatives don't look unless you want to see your Christmas presents. That's called "fair warning." 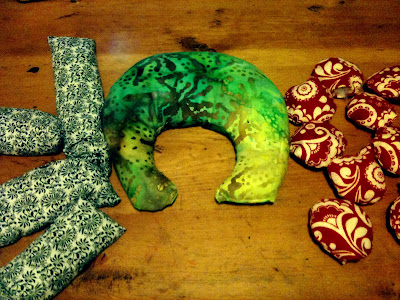 On the left we have lavender-scented eye-pillows. In the middle a slightly misshapen neck-pillow. And on the right, several unfinished Christmas ornaments. I still have to sew on the ribbons to hang them by and attach jingle-bells. I was pretty proud of myself, having finally made some strides towards a long-held goal. Then Rowan asked Temy to show her how to sew. They sat down together for forty-five minutes. The next day Rowan had made herself an entire DRESS - I mean a real, wearable-outside-the-house DRESS. Cute as all get out, in fact. I am trying like hell not to be a total ass, but seriously, I have to admit, I'm pretty jealous. Could she have given me 48 hours to be the one who knew how to sew before she upstaged me? 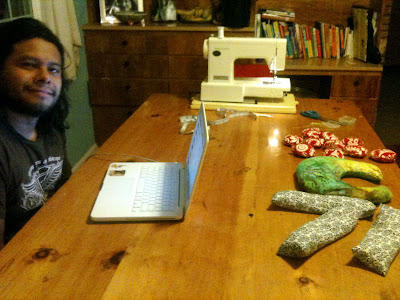 Well. The benefits of having sewing as a new hobby go far beyond eye-pillows. Homero likes to spend an hour or two in the evenings on the computer, and it will be very nice to be doing something in the same room. Something that allows for conversation from both sides.
"What are you reading?"
"What are you making?"
It's a great winter hobby, I think. In the past, I have not often had the mental stamina to get really good at something complex like sewing or, say, playing the piano. Maybe "getting good" is not the right kind of goal ton have, anyway. Maybe the goal is, pass the time with my husband and do something creative and fun and a little challenging. I'm enjoying it so far.

WOW - I'm impressed. You did a great job with the pillows!

I don't think you will ever regret buying that sewing machine (and what a great price!)... So many uses...

thanks farmer! glad you stopped by!

How lucky you are to have both a clever and talented daughter and sis-in-law. Just keep at it Aimee, "practice makes perfect" You did a great job already with the ornaments and pillows.
I remember how I was taught to sew on a machine, no thread and a piece of lined writing paper, then sew up and down the lines, keeping fingers well away from the needle to learn how to guide the material through. That would have been something like 65 years ago !! Sshh!!
I too have worked in a "sweatshop" called Levi Strauss in my past. Then there was a shoe factory and a car manufacturer (General Motors Holden) making car seat covers. Ah, those were the days.

OMG! Ro's dress is amazing! And I could TOTALLY use an eye pillow, but NOT lavendar. I hate lavendar with a grim deathless passion and anything lavendar scented that somehow ends up in my house is taken out back, shot, and buried in a shallow grave.

Seriously. The city is pressing charges.

bro, what scent do you like?
hee hee Rowan made you say "OMG"

I think you did a great job for the first time out:) My first sewing project was way back when we had home ec classes.....a basic apron and an oven mitt! I was addicted...the more you practice the better you will get. But I do get how you feel. My daughter is learning but she isn't as confident as I was at her age.....but the more she works at it, the better she gets. Keep going!

I can't wait to get workin' with my own sewing machine. Hubby bought it for me 2 yrs ago for a birthday gift and I haven't found a spot to set it up yhet... definitely it is my one TO DO thing for 2011~ :) Enjoy your sewing machine in good health!