death of a pig 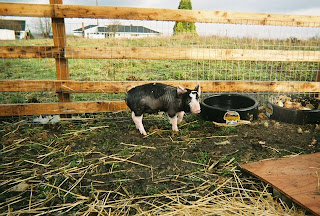 When I scheduled the pig for butchering last friday, I didn't know I was going to have houseguests.
My dear friend Charlotte, my best friend since we were both sixteen, came up to visit with her husband during spring break. She is a teacher in Glenwood, washington, which is so far out in the boonies that you probably won't know where it is even when I tell you the name of the nearest decent sized town, which is White Salmon. Hood River Oregon is the closest real town. It takes her about seven hours to drive here from there, so I was flattered, and exited to see her, as she is eight months pregnant with her first baby.
But I couldn't put off the farm chores. I had already rescheduled the pig's d-day once. And the baby goats needed to be taken to the vet for dehorning and castration. Some people do these jobs themselves, but I'm just not quite there yet. For a while, I had thought I would dehorn them myself, but then I checked out the instructions on the internet, with graphic pictures. It's a red hot iron procedure. And castration is way beyond my comfort zone. I know I'm probably too soft for farm life, but I decided I could be conveniently absent when the knackerman came for the pig, and the baby goats could have their various operations under anaesthesia. My guests were coming with me to the vet. (Aren't I a great hostess? I really know how to entertain.) So we were loading the babies into the dog crate when the pig killers showed up in their large and very businesslike white panel truck. I pointed them towards the pig and they walked right up and shot him in the head with a rifle. We turned away quickly. It took us about another five minutes or so to get all organized and belted in the car, and I thought I'd just ask the men if they needed a check or something before I left. But as soon as I looked in that direction, what I saw made me change my mind rather quickly. The pig was being dragged along the ground towards the truck, still flopping around violently.
Well, I was sorry my guests had to see that. I was sorry I had to see it. We all wondered aloud why they didn't just shoot him again. Then we went and had the babies' heads burned and balls cut off. I was feeling very barbaric. I was questioning why I couldn't be content eating plastic wrapped mystery meat like everyone else in the world. What odd brand of masochism made me decide that I should confront the realities of omniverousness? This feeling passed; realistically I know that my pig enjoyed a quality of life undreamt of by those pigs that provide grocery store pork. He was allowed to wander and root around, and generally behave in a natural piggish manner. He was healthy and relatively free. I don't have any guilt on that count.
But it did continue to bother me that he wasn't killed quickly. So much so, that I decided to risk embarrassment and call the meat company.  "Why didn't they just shoot him again?" I asked.
"Oh, he was dead," the lady told me. "I promise you, he was dead. They shot him point blank, they can't miss, and then they immediately cut his throat and stab him in the heart. He was dead. All animals that have nerves flop around like that," she said. "Even people do, but they don't show that on TV."
"I guess not," I said. "Well, that makes me feel better."
And it did, despite also making me feel a little foolish. I'm a nurse; when people die of natural causes in the hospital they don't flop around. Anyway, I was relieved. I was starting to actually question whether or not I'd be able to enjoy the meat. I'd just about decided that if I can't enjoy this pork, then I'll just have to stop eating pork altogether. I still don't know what strange breed of masochism it is, but if I can't face my meat with my eyes wide open, then I got no business eating it. I'll let you know.