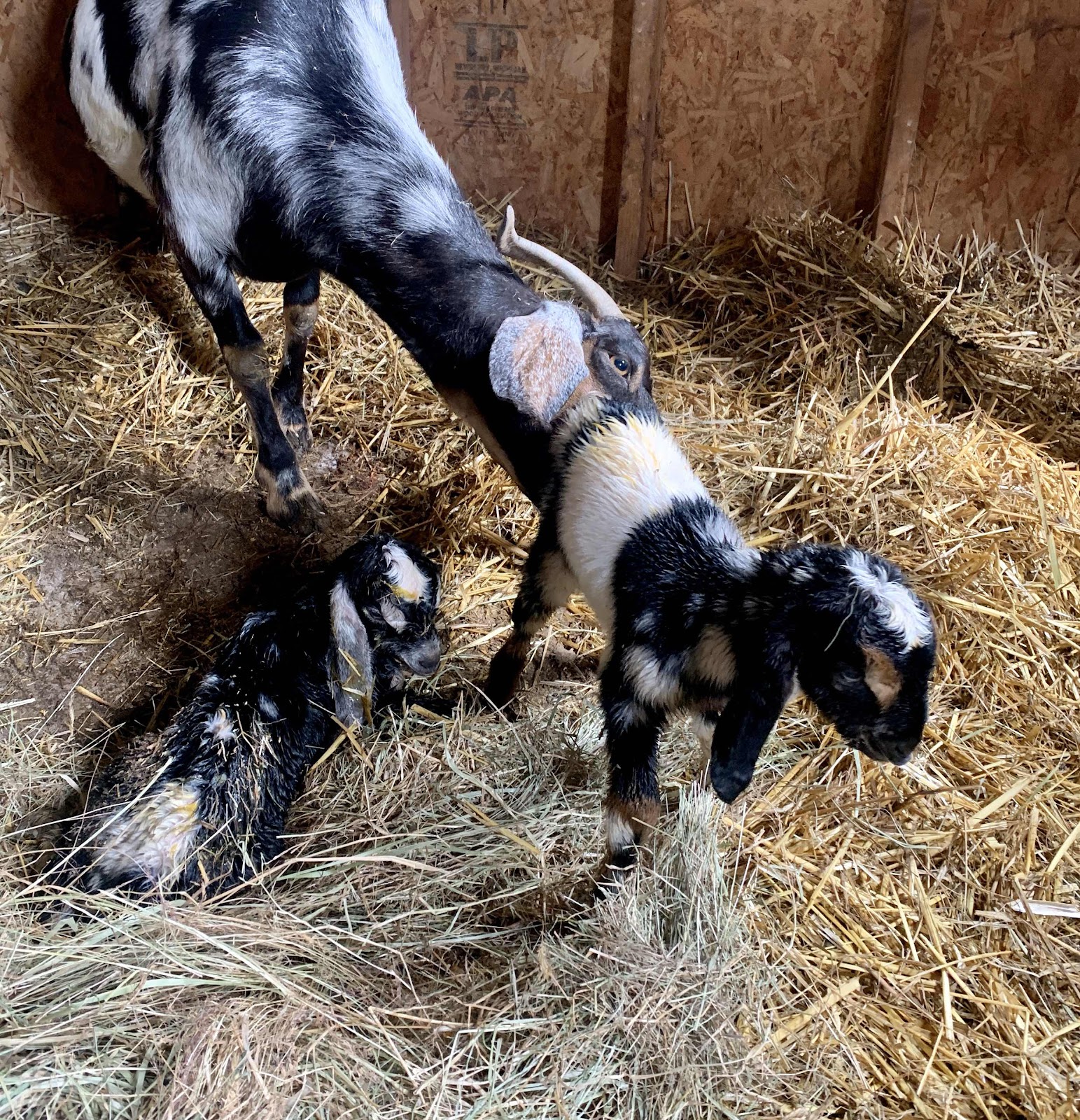 Polly finally gave birth today. I’ve been expecting her to do so for about a week, ever since I saw her kneeling with a long string of amber colored goo depending from her vulva. That’s usually a sign babies will be born the same day. But for whatever reason, she didn’t give birth, and a full week went by.
Last night I could tell it would be very soon, because her udder had gotten very tight and shiny. That’s really the best indicator. So we locked her up in the mama barn. I fully expected to find babies when we did morning chores, but still nothing. I kept checking every hour or so, and finally at around noon there was a bubble.
I sat and waited, but nothing appeared; just the bubble of amniotic sack. After another hour or so, I could see two hooves, but no head. More worryingly, I could see flecks of blood and fecal matter in the amniotic fluid inside the sack. I don’t like to interfere if I don’t have to, but it was clearly time to see what the heck was going on.
Homero helped me get Polly onto the milking stand, and I washed my hands, lubed up, and took a gentle feel inside.  I was worried I would find the head curled back; that’s a common malpresentation and is often hard to correct. But no - I could feel the head easily correctly positioned above the front legs. But it was very high - too high to slip under the  dorsal pelvic bone. I stuck a finger into the baby’s mouth (and promptly got bitten, proving baby was alive), and exerted downward pressure to lower the head enough to let it slip under the dorsal pelvis. After that it was easy.
The baby was huge. A big, pretty spotted buckling. Another baby appeared quite quickly - another enormous baby, this time a doe. I decided to quickly go in again and check to make sure there wasn’t a third baby - nope, all empty.
The babies had had a rough time, as had mama. They were stained with meconium (meaning they had pooped inside - not a normal thing to do and indicative of prolonged labor) and took their time standing up. I scrubbed them with a towel, and waited to see they both stood up, but resisted the urge to further interfere. I went inside and left mama and the babies alone.
Checking back after a couple hours, both babies are dry and fluffy, and I could feel they had a little bit of milk in their tummies. They look like they are all going to be just fine.
Now we only have Lilac still to go. She’s a first freshener, and so we don’t know yet how it will go with her or what kind of mama she will be. There’s always a risk with first time mamas that they might reject thier babies. But luckily, she’s the last to give birth this year and so has had the benefit of seeing her mother and auntie birth and nurse their babies. My guess is she will do just fine.