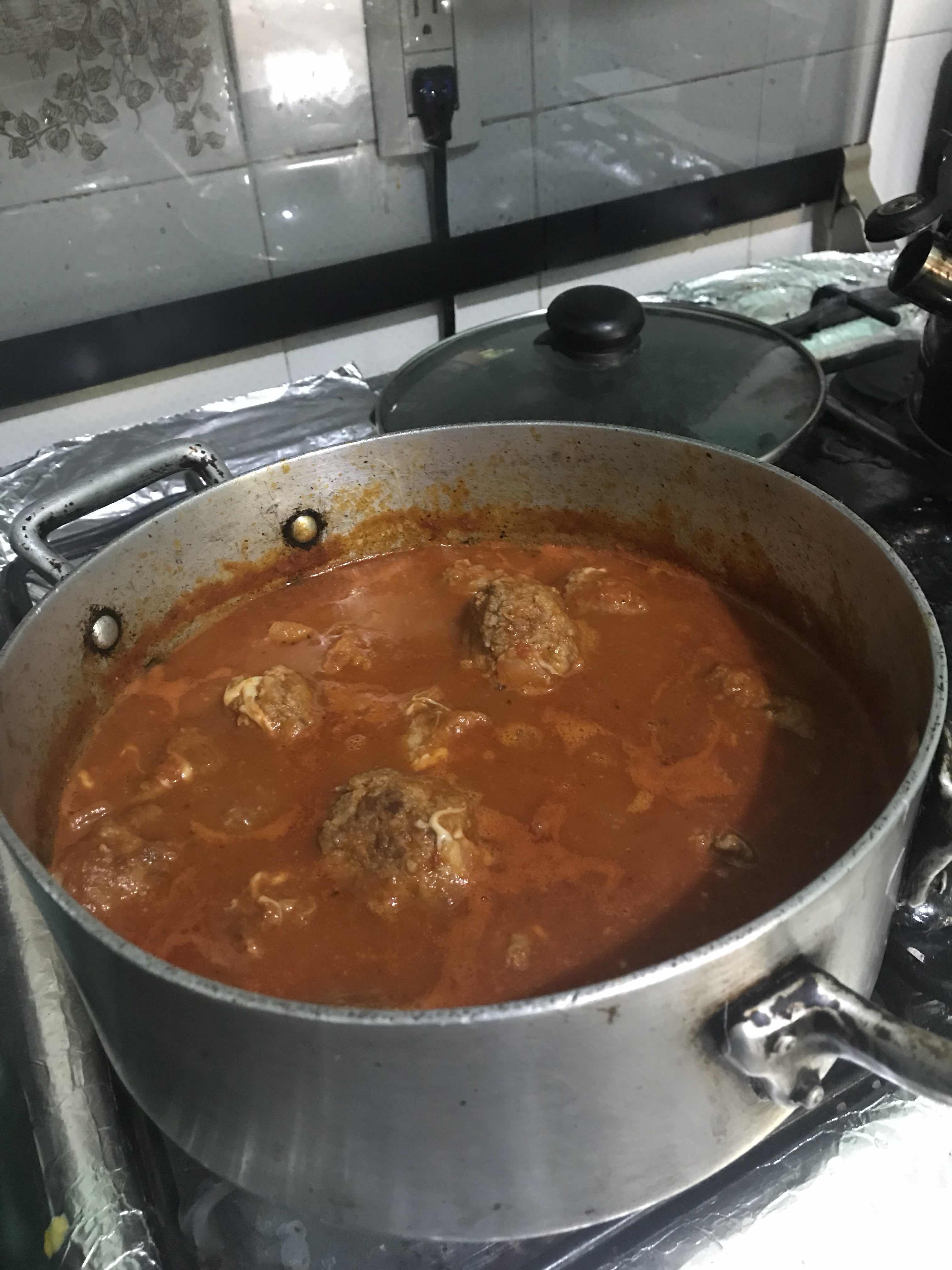 Meatballs in red sauce
I love to cook, but cooking here presents some, ahem, challenges..
We are staying at my mother-in-law’s house and that means I am cooking in her kitchen. Which, I will say, is pretty well equipped. Four burner gas stove with a cast iron comal; functional fridge and freezer. Decent selection of cookware, by which I mean there is a small skillet and a large skillet, stockpots of various sizes, cutting boards, and a full range of implements like spatulas and strainers. A pretty good blender.
But most of the equipment is.... not of a quality I would buy at home. Pots and pans are aluminum, or whatever that sheet metal-covered-in-blue-enamel camping ware is. They are warped and don’t sit flat on the burner. Knives are cheap, dull, and plastic handled. There is theoretically an oven but it hasn’t been used since we lived here five years ago and is crammed with stuff I wouldn’t attempt to remove and find other space for.
Then there’s my mother-in-law’s organization system, or lack thereof. Now, I’m no neat freak and I know my own kitchen falls far below the standards of those of many people. So I’m not being judgemental, I’m just explaining why I have a hard time sometimes.
Mamá keeps everything in plastic bags, usually opaque ones, twisted shut, knitted at the top, and thrown into the cupboard. There are probably a hundred such bags, and I can’t tell what’s in any of them. There are big bags, small bags, bags that crackle when you pick them up, as if stuffed with dried twigs, and bags that are heavy and solid enough to be full of sand. The knots are so tight I can never undo them, and I don’t want to tear open the bag to see what’s in it.
The fridge is the same, as is the freezer. So of course I just buy my own food. I brought home a bag of rice and a bag of beans and mama says “No no no! Why did you buy rice! We have lots of rice!” Yeah - probably eighteen separate bags of rice, but which ones?
And next time I look for the rice, or the beans, or the yogurt, or the cheese I brought home, it’s disappeared into little opaque bags. Some of her kitchen habits leave me mystified. I bought a loaf of sliced bread for sandwiches, and when I went to look for it, she had put it in the freezer and it was frozen solid.
Mealtimes are also different here than at home. A fairly hearty breakfast whenever we stumble downstairs (we are not early risers), prepared by Mamá, who does not believe us when we say we prefer to eat lightly in the mornings. At home, we have coffee when we wake up, and then lunch a few hours later. Here, we are presented with tamales or quesadillas or chicken in mole or beans and rice with scrambled eggs first thing.
Dinner is late, usually sometime between 8 and 9. If I want to cook - which I often do, both because I like to and because the children ask me to - I have to work with what I can find. Within walking distance, there are only very small stores in people’s homes that carry a quite basic supply of ingredients: rice, black beans, a few canned goods like tuna and evaporated milk, and a small selection of fresh produce. And a decidedly wider selection of junk food, mostly Bimbo products.
Cooking Mexican food would not present much of a problem, obviously, as long as I stuck to simple recipes. But Mamá does all those dishes so much better than me that I prefer to leave them to her, and my kids often ask for dishes I make at home. So I improvise.
Hope asked me for chicken and vegetables in Thai peanut sauce like I make at home. I told her I’d do my best.
Chicken: no problem. It’s tough free-range ranch chicken, but it tastes good. So I boiled the heck out of it with garlic, onion, clove, allspice, and salt and pepper and shredded it, saving the broth. The corner store had green cabbage and green beans, so those were the vegetables.
The peanut sauce was the tough part. I had to wait until Friday, when they hold the neighborhood tianguis (street market) to get ginger. There was a bottle of soy sauce in the fridge that I’m pretty sure I bought myself two years ago.
The hardest thing to figure out was fish sauce. If there’s no fish sauce, it’s not Thai peanut sauce, full stop. Finally I had a brain wave. 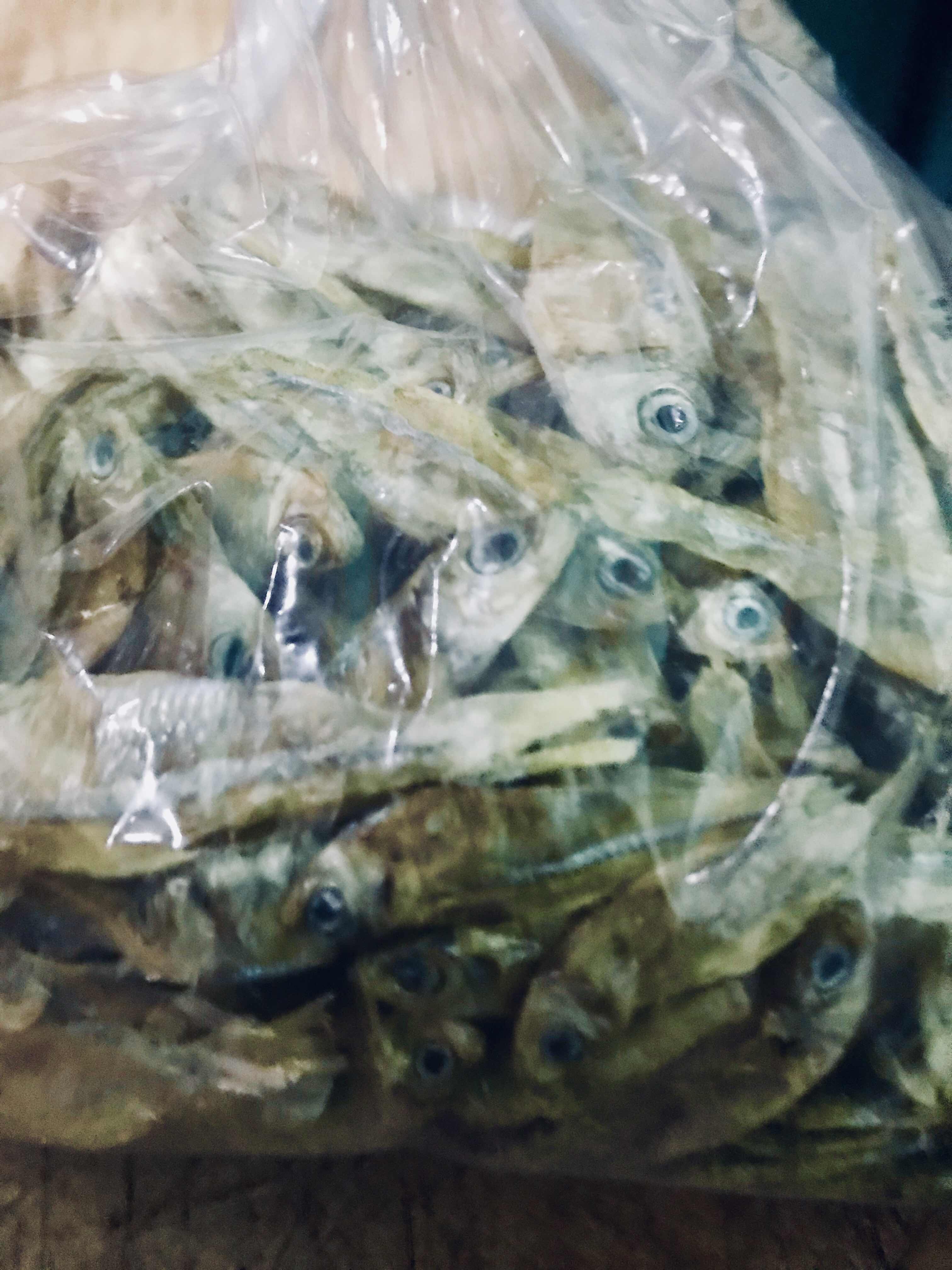 Charolitos
These are dried anchovies, or charolitos, as they are called here. They’re super tiny, less than an inch long, and dried crisp. I got them at the tianguis. Six or eight of them reproduced the flavor of fish sauce, at least somewhat. The tianguis also provided a young coconut, skillfully removed from its husk in one piece, with the water still inside, like a perfect snowball. The man does it with a machete.
Mamás blender was not up to the task of turning roasted peanuts into a smooth paste, even with the admixture of chicken broth and coconut milk,  so the resulting peanut sauce was a bit gritty, but it had the right flavor profile. Hope was happy.
Today I had a craving for spaghetti and meatballs. The carnicería right next door was closed, but I was determined to have meat balls so I took a mototaxi up to the big butcher about a half mile away. I asked for three-quarters of a kilo of ground beef. The butcher hacked off a few pieces of very lean meat - I have no clue what part of the animal it was, but there was zero visible fat - and ground it for me. I would have preferred a coarser grind as well as a piece with a little fat on it, but oh well.
Back at home I mixed the meat with a couple of eggs and some very fine bread crumbs (Mamá had bought a bag of bread crumbs to fry fish the other night) and salt and pepper. I looked in the spice drawer, saw twenty or thirty little plastic bags of various colors, and sent Paloma next door for three pesos worth of oregano.
No olive oil, so I fried the meatballs in vegetable oil.
Making a red sauce was fairly straightforward except for the lack of olive oil. Garlic, onion, more oregano, whizz up some lovely ripe tomatoes in the blender.
When we went to the big grocery store last week (it’s accross town always) I had been delighted to see Parmesan cheese in the green can, just like at home. I bought it, and set it on top of the fridge, but since then it has disappeared into the depths of some cupboard or another and I couldn’t find it. So I used the cheese I have, which is quesillo. It’s basically mozerella, but stringier. It’s basically string cheese. It melted into the red sauce in a lovely gooey way.
I’m looking forward to seeing how my improvisation turned out.