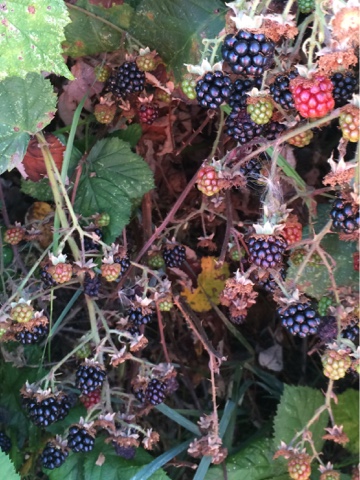 We had a bit of difficulty getting home
from Oaxaca. Without going into details, we got home 48 hours later than we thought we would; paid more than a thousand dollars more than we thought we would have to; and had to take a seven hour bus ride to Mexico City instead of flying from Oaxaca, as we had planned.
None of that matters, in the grand scheme of things. We are home - whole, hale, and hearty. We had a wonderful trip (recap to follow, with pictures). The farm, under Rowan's care, has flourished in our absence.
I was sorry to have missed so much of harvest season. All the berries were early this year and the strawberries and raspberries came and went while we were gone. I got anxious as I saw my friends' Facebook posts of blueberries and even blackberries while I was still
thousands of miles away.
Today I found out that there is plenty of harvest season left. As you can see above, the blackberries are in full swing but there are plenty of green ones left and there will be blackberries for weeks yet.
The blueberry harvest is not over yet, either. My favorite local no-spray blueberry farm had many plants loaded with berries still, although some had begun to dry on the bush. It only took me twenty minutes to pick about 4 pounds. Sometime this weekend I'll be bringing the kids out to pick more. 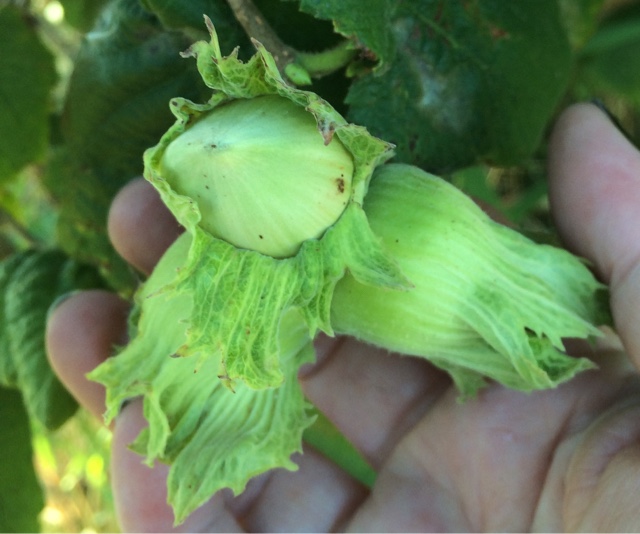 Walking the orchard brought some delightful surprises. Some trees that had never yet borne fruit are bearing. Chiefly - the hazelnut. I don't know if this is due to the two new tiny hazels I planted this spring for improved fertilization or if the bush simply needed more time. In years past, it flowered but never developed nuts. This year there are hundreds of nuts all of a sudden. I need to read up on when to harvest them and how to cure them.
Another tree, which I had pretty much given up on, surprised me: the greengage plum. We have two plum trees - an Italian plum and a greengage plum. The Italian plum has been providing us with a good harvest for several years, but the greengage plum had not set a single fruit, despite growing tall and flowering. For whatever unknown reason, it decided that this was the year it was going to fruit. The plums are just ripe - and delicious. The greengage plum is a heritage fruit that many of us remember, but which you almost never find in the grocery store. I'm so happy ours has decided to bloom.
All the pear trees look pretty loaded (we have four - too many), but one in particular is so weighed down with hundreds of enormous pears that the tips of the branches are actually resting on the ground. I think it is the Comice pear - my favorite. They haven't started to fall yet, so I'll leave them be until they do. 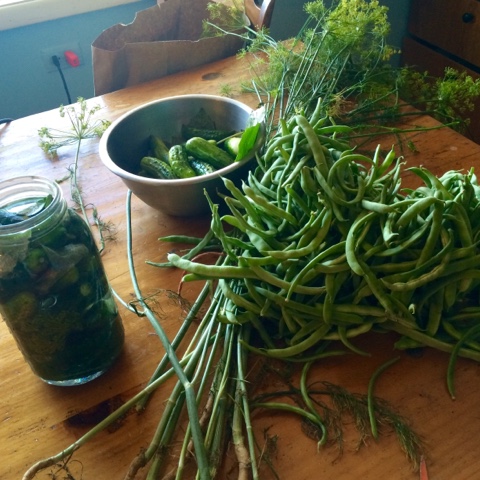 Our first day back happened to be a Friday, which is farmer's market day in Ferndale. Overly ambitious, perhaps, I bought enough green beans for canning and several pounds of pickling cucumbers and dill to start a crock of lacto-fermented pickles.
I've already got the pickles going in a big glass container on the kitchen counter but the green beans will have to wait until I buy some new canning jars - tomorrow. I swear. 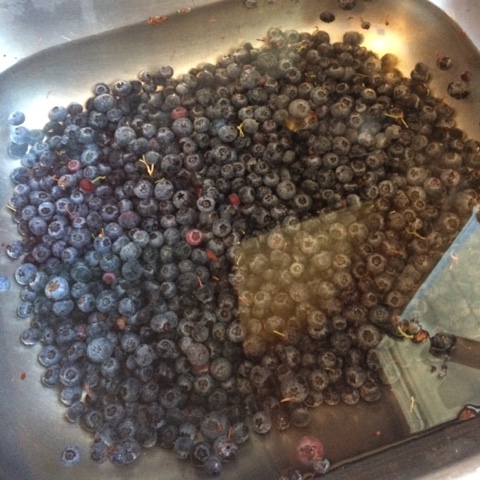