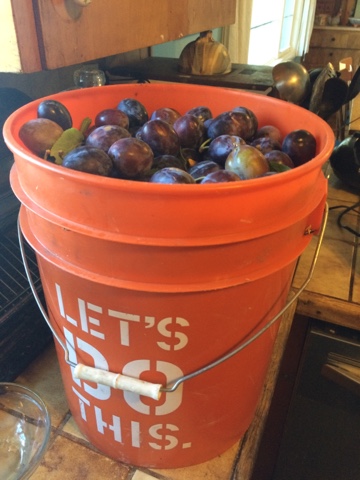 In recent days, as I took Haku outside in the evenings to run around in the orchard,  I've noticed that a couple of trees in the orchard are so heavily laden with fruit that the branches are actually sitting on the ground.  Specifically, the Italian plum and one of the pear trees - the Comice - were so bowed down that I made a mental note to get out and pick some fruit as soon as possible.

Then a couple of days went by. This morning Homero told me that the plum tree had broken nearly in half.

I said "No, the big branch is just sitting on the ground, that's all."

The biggest branch was indeed broken. It must have happened just that day, because the leaves were still bright green and crisp. I ran for a bucket and with Homero's help, stripped off five gallons of plums from just that one broken branch in five minutes flat. We didn't even get all the plums from that branch - many of them fell on the ground and we didn't even bother to pick them up.

The plums are not quite ripe, but it doesn't matter, because I looked it up and plums ripen beautifully off the tree. In two or three days I will have a bushel (more or less) of ripe plums, not even counting those still on the tree. The still-on-the-tree plums account for at least four fifths of the total. I tried to think of something to do with five gallons of plums. Drying comes to mind, of course, but really - who likes prunes that much? And I am not much of a jam-master. If I'm going to attempt to make jam I will make blackberry jam, which we all like, rather than risking going to all the work of canning jam only to find out that nobody enjoys the end product.

I don't have much experience with making alcohol. Sure; a side effect of fresh cider is tepache (naturally fermented fresh juice) - and I have occasionally expanded upon wild fermentation and ventured into the alchemy of hard cider - with mixed results. But I have never set out deliberately to create "wine" which seems for some reason very serious and highbrow, even when made from an accidental glut of plums instead of fancy pedigreed grapes.

Today I went to our local home-brew store and told them what I was up to and ended up spending something over $50 in tubing, plastic airlocks, yeast, and specialized equipment. Chances are better than even that I will not produce anything drinkable by any but a late-stage alcoholic, but I'm going to try. 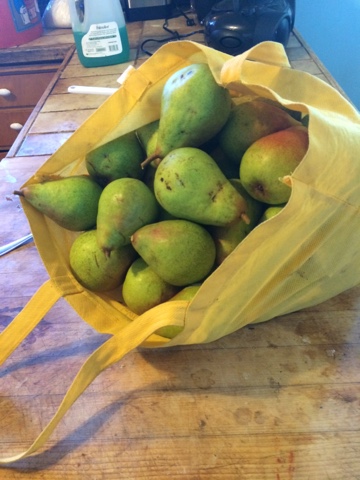 The pears are a whole 'nother story.

For one thing, they mostly will not ripen on the tree and demand careful and specific post-harvest handling in order to reach peak perfection. For another thing, the time period between "peak perfection" and "post-perfection" is about fifteen minutes.

Also - The pears arrive in tsunami-sized waves. So when I try to think of something to do with the pears, I am thinking about seventy-five or eighty pears at a time, not six or eight, which would be the perfect number to make into a pie.

With that in mind, I went and bought a dozen wide-mouth quart sized canning jars. I figure I can make a few gallons of pear-sauce; hopefully mixed with blackberry if I can coerce my children into picking a few pints.

I may also try Car-dehydrating. The weather has been unrelentingly hot. It's supposed to hit 90 degrees tomorrow and stay there through the weekend. I have read that in this kind of heat, you can lay our thin slices of fruit on foil-covered trays and put them in your car. The temperature inside will reach 150-175 quite quickly. Basically, if it would kill your dog, it will dehydrate your pears.

But by far the best option is to trade some of my fruit for something else that I want more. I put out the word today over social media and within minutes had received offers to trade plums for locally caught trout; for freshly harvested green beans;  and for assorted canning jars. That's neighborliness at its best.

Every year I mak plum wine and canned pears and love both through the winter. Good luck with your heavy harvest. We have a lot of fruit here to deal with as well.

Turning plums into trout is about the best alchemy I can think of!

You might try canning a few pints of plums in syrup, just to see if you like them. I ended up loving them so much - I finally figured out what all the historical fuss about plums is when I had them canned. You can then bake them into amazing tarts/pies, or spoon them on oatmeal, ice cream, or whatever. Pear/plum sauce might be awesome, too. Then mix the remaining syrup from the jar with sparkling water for an amazing plum "soda." Yeahhhhhhh...

Schooner- I;'d love to have your recipe for plum wine

eatclosetohome- a few years ago, somebody traded me six quarts of plums in syrup, for something I don't remember now. I still have four of them LOL