Welcome February 2nd, a day of many names in many traditions!

In what is probably the very oldest and most universal tradition of all - the solar calendar - February 2nd is one of the cross-quarter days, meaning a day that is exactly halfway between a solstice and an equinox. Believe it or not, ancient astronomers knew the dates of the solticses and equinoxes more than six thousand years ago. Today is halfway between the winter soltice and the spring equinox, and in the Northern hemisphere used to be marked as the first day of Spring. Indeed, only a few days ago, I noticed that the pussy willows were grey. One of my neighbors has a large pussy-willow, and I had to stop and ask her if I might take a few sprigs for my altar. I have them in water, and I'm hoping they will root and I can plant them on my property. It should work - willows are notoriously easy. 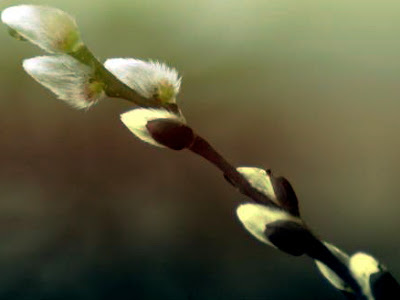 Other unmistakable signs of early spring I have noticed are robins (I saw a whole field covered in them the other day, driving home)... 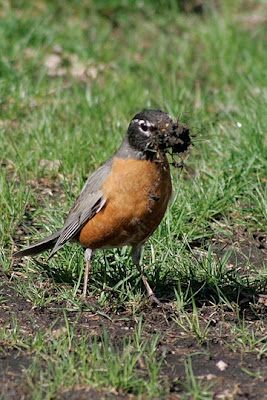 witch-hazel in bloom at my sister's house... 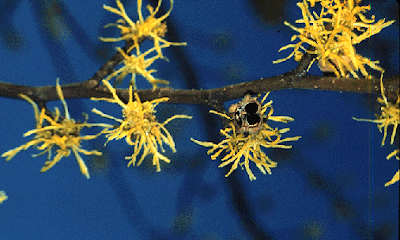 ...and the plaintive cry of the killdeer, looking for a nesting site. Killdeer are handsome shore birds who breed in sandy or gravelly uplands within a few miles of the beach - which perfectly describes my property. Their piercing cries in the evening and their swift, low, straight flights across the twilit ground are hallmarks of February and sure signs of the coming nesting season. 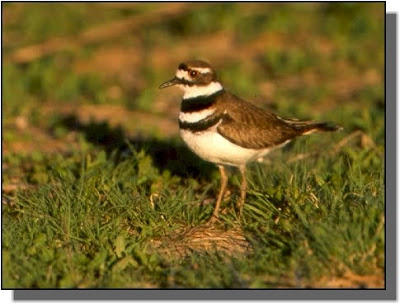 In the Celtic, or Pre-Christian European tradition, the first cross-quarter of the year was known as Imbolc, the beginning of the season of "emerging." It marked the time that the first sprouts began to emerge from seeds and bulbs, and especially the time that sheep and goats begin to drop their lambs and kids and to produce milk. It is the time that the world begins to emerge from the long sleep of winter. It is the season of waking. In modern celtic tradition Imbolc is observed with white candles on the altar to celebrate the return of the light to the world. 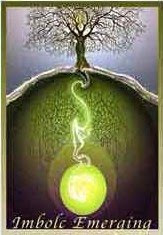 It is fitting, therefore, that when Ireland became Catholic, February second was commemorated as St Brigid's day. Brigid of Kildare was a real person, a contemporary of St Patrick, but the woman was named for an old Celtic Goddess, Brigid. Brigid the Goddess has always been associated with fertility, and more specifically with lactation and the fruits of the breast. In olden days she was the maiden, the young feminine divine, the nubile virgin ready to be made fruitful by the divine male. Her name, in fact, is the derivation of our word "bride."

In more modern Irish Catholic tradition, St. Brigid is the protectress of dairymaids, of cattle and kids, and the one who blesses the making of butter and cheese. Pregnant women and dairy farmers pray to her to this day, and many people believe that "Brigid" is one of the oldest, original names of the Divine Mother and venerate her as the Creatrix. She wears the youngest of the triple faces of the Great Goddess. 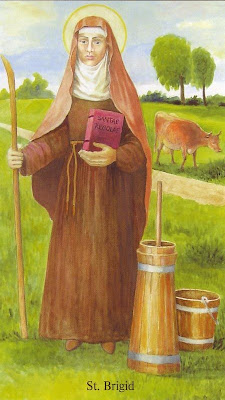 February 2nd is still a sacred day in the Roman Catholic church calendar, known as Candlemas. Indeed I was rather surprised when I asked my Lutheran pastor about Candlemas and learned that she knew nothing about it, at least by that name. Today marks the day that Jesus was presented in the temple, the day that Mary's period of ritual uncleanness after giving birth was over (forty days) and she was permitted and required to present her firstborn son to the priesthood. Since I am a very fledgling Christian I cannot provide gospel verses, but I bet Christians among you can find them. The event of Jesus' presentation to the world - his Christening, if you will - is very appropriate to the old theme of the holiday, the theme of beginnings, of emergence. Christ emerged from his mother's womb and was born to the world of men on this day. 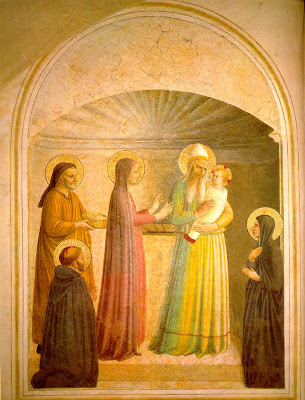 Of course it is inconceivable that such an ancient and deeply rooted holy day as a cross-quarter would be ignored by the Catholic church; no doubt it was consciously appropriated. That doesn't matter to me at all. I am perfectly happy to celebrate Imbolc, Brigid, and the Newborn Babe all at once. I am delighted to have pussy willows and white candles on my alter, along with a few of the first eggs of spring and soon, the first crocuses and perhaps soon, a small vial of the first milk. In a month or so, I will have the cross of the risen Christ.

Right now, my favorite goat, Iris, is within days of giving birth. I see no conflict between the rites of Spring on my farm and the sacred rituals of the Chruch calendar. It may seem strange to others, but it is not strange to me that Iris reminds me of Mary, heavy with child or newly delivered. Mary was, as I am - as Iris is - a female animal, channeling life through her body, guiding a spirit into flesh. We are all of us examples of the ongoing process of creation, most joyfully evident in this season of Imbolc.

Thus is the world renewed, year after year.

This picture above is my favorite icon of the pregnant Mary. It is painted on the ceiling of a church in Huatulco, Mexico, and is advertised as the largest vision of Mary in Mexico - which is saying something. Having been there, I can tell you biggest or not, it is big. And beautiful. In fact I think this is my favorite church among all those I have visited in Mexico, land of a thousand gorgeous churches. This pregnant Mary (see the small blue fetus, floating upside down in her mid-section?) is so serene, so calm. May the spirit of Mary, of Brigid, of Iris enfold you this season, and may you take great delight in the awakening and the emergence of new growth this early spring season!
Draft